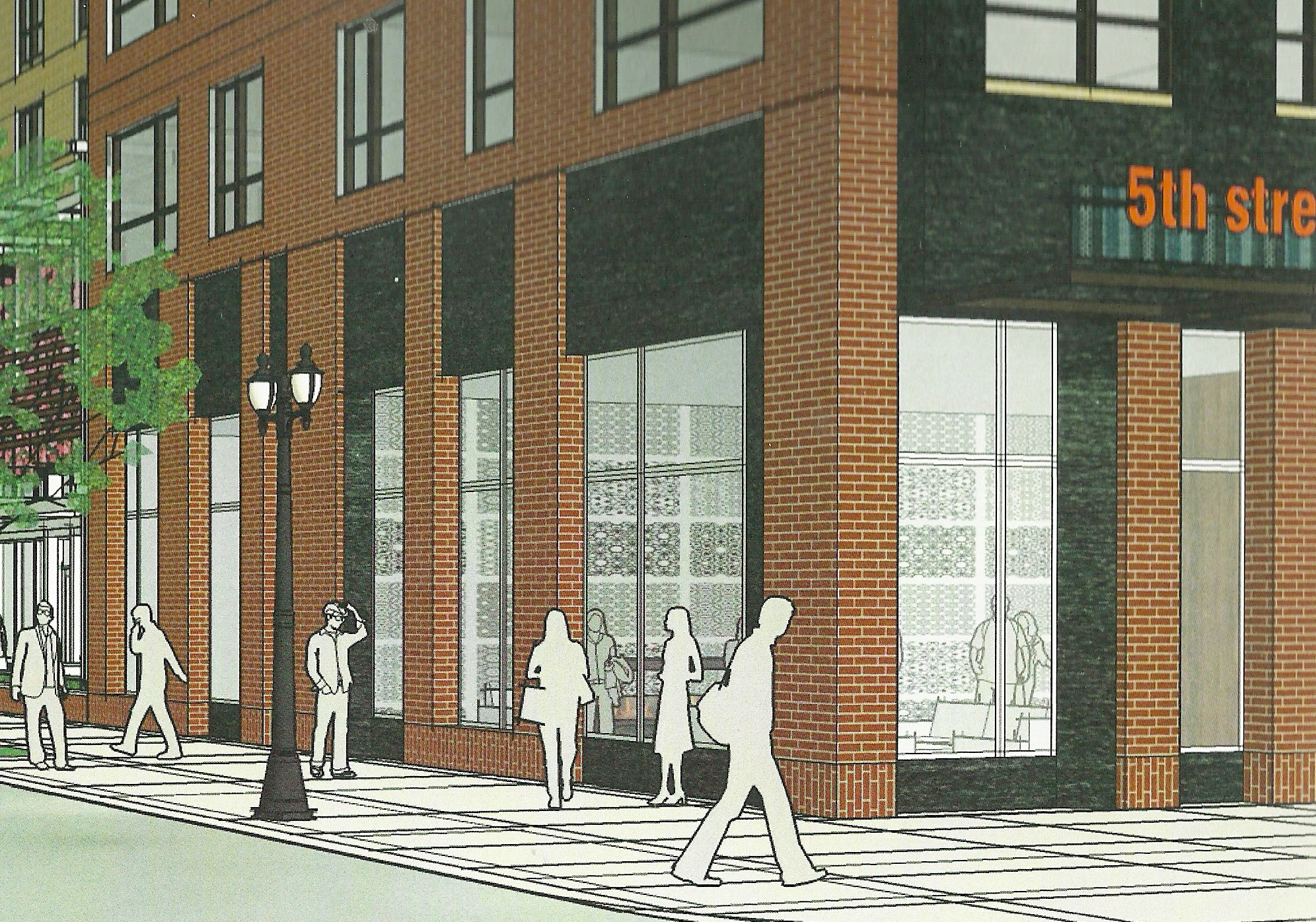 A rendering of the proposed development

The proposed Opus mixed-use building in Dinkytown would become a “high-rise ‘Animal House’” that “is equivalent to an on-campus dormitory in the middle of a business district,” says Jason McLean, owner and general manager of the Loring Pasta Bar and Varsity Theater.

McLean—whose views, in the form of a written statement, were presented by his executive assistant Lynn Nyman—and another prominent Dinkytown business owner told the Marcy-Holmes Neighborhood Association land-use committee on March 12 that the proposed Opus mixed-use development endangers their future as well as that of the entire business district adjacent to the University of Minnesota’s Minneapolis campus.

The “massive loss of parking” both over the long term and during construction will jeopardize the future of Kafé 421 adjacent to the new building and the Loring Café and Varsity Theater in the next block, they said.

The comments came as architect David L. Graham, a principal with ESG Architects, reviewed the latest design for the Opus Group’s proposed new mid-rise, mixed-use development that would fill nearly half a block of the four-block Dinkytown business district.

The six-story Opus building includes 9,600 square feet of commercial space and 140 rental dwelling units; about 32 percent would have one bedroom, and 60 percent would have two bedrooms.  Zoning would have to be changed to C3A for mixed use with variances for increased height, setbacks, and parking.

Jim Sander, whose wife, Georgia, has owned Kafé 421 for 10 years, said the adjacent development would crowd out his customers.

Nyman, McLean’s executive assistant, said her company has already exhausted all the possible parking spaces, even with valet parking in nearby church parking lots.

“We don’t have the 150 to 200 spaces of UTEC,” she said, referring to an apartment complex planned for the site of the University Technology Enterprise Center. “You can’t tell people where to park when we have a sold-out show on Friday.”

McLean’s statement added, “This loss [of parking] will seriously jeopardize the future of the businesses that have made Dinkytown the thriving destination district it has become in the last 10 years.”

In his presentation with illustrations, Graham said he has adjusted the building’s design to allow for more public parking and more street-level parking.

“In response,” his report said, “the development has added additional street-level parking, going from 34 stalls to 42 stalls. There are 96 below-grade parking stalls resulting in a total parking count of 138 stalls (increased from 130).”

Asked for a comparison to the current parking, Graham said, “It’s a little hard to understand how many spaces are there; it’s in the ballpark of 90 or 95.”

In negotiating variances, Graham said, he will work with the neighborhood and the city to adjust the mix of residential and hourly commercial parking to meet projected demand.

Graham said Dinkytown already handles heavy truck traffic with an average of 10 to 15 delivery trucks on weekdays and as many as 20 to 30 a day during the peak times.

Sander said the projections don’t begin to address the problem.

“We’re talking about thousands of trucks from [the Opus and UTEC] sites,” Sander said. “You haven’t shown how they’re going through Dinkytown without traveling over bike lanes, hindering pedestrian ways, and going through already congested corners.”

“You’re about to give us about a year and a half in which we cannot park. You can’t do that without damage to the infrastructure that makes this area attractive to you in the first place,” Sander said.

“You need to have a plan that will do this without destroying the community,” Sander said, adding that the development violates the neighborhood’s master plan. “If you don’t respect your master plan now, it’s a dead letter. It’s a reflection on master plans for the entire city. It has a meaning and there are people who rely on it.”

Gordon Kepner, who lives near Dinkytown, said violating the master plan because it will be revised is like breaking a law on the assumption that the legislature will change it.

Architect Graham said his building design has been changing in response to feedback from three meetings with the Marcy-Holmes Neighborhood Association, a meeting with the Dinkytown Business Association, and two appearances before the city planning commission’s committee of the whole.

“We’ve tried to continue to look at the street level of Dinkytown, to articulate more and do smaller commercial spaces,” he said. “We were asked by the planning commission to define the character of the architecture to reflect the businesses already there.”

Taking inspiration from the simple brick and painted concrete block buildings, Graham designed what appears to be a two-story building at the corner of 14th Avenue and Fifth Street, where the House of Hanson is now.

“The key to this is for smaller tenants to do the signage and the character will grow out of that,” he said. “The whole idea is to create the character on the street with multiple entries.”

“We like to think that the detailed architecture is getting better with a lot of input,” he said. “Fundamentally, it’s the same concept and the same issues we’re grappling with. We’ve been to the COW [committee of the whole] twice to get input.”

“Some of us, including me, are concerned about all the students in all one place,” said Arvonne Fraser, co-chairwoman of the land-use committee. “We’ve had problems occasionally after hockey games and others. You’re just adding more students to this neighborhood. You aren’t interested at all at finding young faculty or putting a diverse mix in here.”

He said their Stadium Village building has large windows and usable space without cluttering it up with balconies. “These are smaller boutique buildings, not mega resort style,” he said.

“It’s architecturally easier and simpler without amenities,” Graham said. “We are thinking of walkability and proximity to the campus more than interior amenities.”

A young man in the audience said planners seem to talk about the character of Dinkytown, thinking of it as primarily architectural. “Character is more than how something looks,” he said. “It’s how something is. It seems to me Dinkytown is commercial. Mixed-use is to justify the housing there and goes against that character,” he said.

The developers responded that many Dinkytown buildings are already mixed-use buildings with housing units above businesses.

“What I find troublesome about the whole process,” said Jo Radzwill, co-chairwoman of the land-use committee, “is that the idea of preserving Dinkytown is kind of a moving target. There is no consensus what time period we’re conserving it from. Some aspects are from the ‘60s. McLean brought his business that changed the color of Dinkytown as a destination; it changed tremendously.”