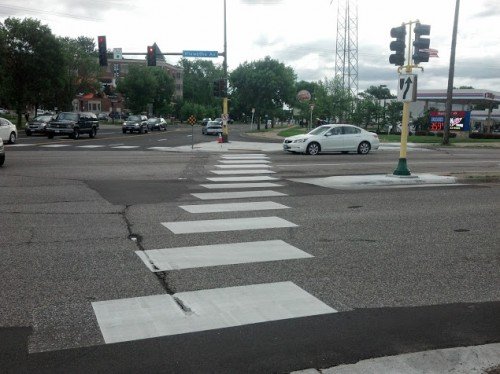 The Hiawatha Avenue crosswalk improvements at 38th, 42nd and 46th Streets are largely complete. For a reported cost of $850,000, curb bumpouts have been created in most places to reduce crossing distance, pork chop islands have been enlarged and center refuge islands widened, curb cuts are now ADA compliant, the crosswalk along the south side of 46th Street has been restored, and new crosswalk activation buttons (“beg buttons”) are in the process of being installed. As well, new trees have been planted along both sides and in the median of Hiawatha.

I’ve been active for several years with the Standish-Ericsson Neighborhood Association working with the Corcoran Neighborhood Organization, Longfellow Community Council, City of Minneapolis, State of Minnesota and Hennepin County in particular to see this project through. So let’s take a photo and video tour of the results.

First off is perhaps the biggest success of the whole project: restoring the Hiawatha crosswalk on the south side of 46th Street. This crosswalk was removed around the time light rail service began because a second left turn lane from westbound 46th to southbound Hiawatha was added. Crosswalk restoration was not originally part of the Hennepin County plan for this project, but I successfully lobbied past-councilmember Colvin Roy to restore the crosswalk. You’ll notice the “no crossing” signs are still up and beg buttons/Walk signals have yet to be installed, but I’ve been assured these matters will be resolved soon.

For bikers on the Hiawatha bike trail, the center medians at the 38th, 42nd and 46th Street crossings have been removed. Overall, these crossings are improvements for cyclists, although, as you can see below, some infrastructure remains smack in the middle of the bike travel “lane.” 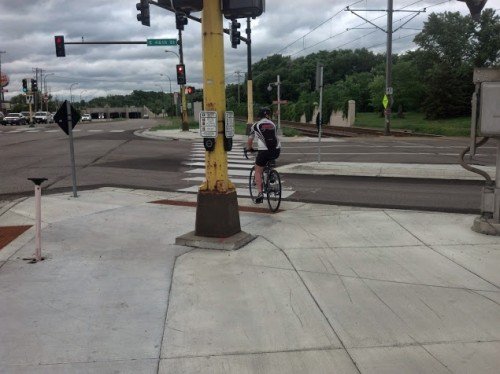 I noticed two things at 46th Street. One is that, with the new adhesive crosswalk “keys,” stop bars have not been added as part of the project. Regardless, vehicles do not always honor the crosswalk. 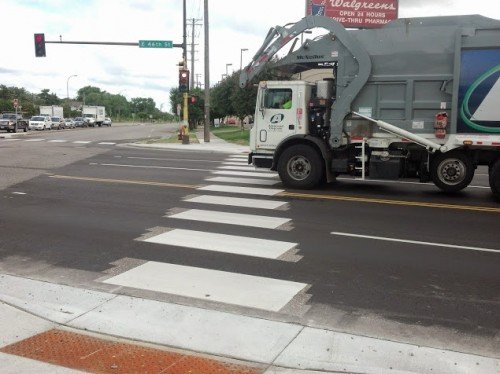 I sincerely wish crosswalks could look more like this. 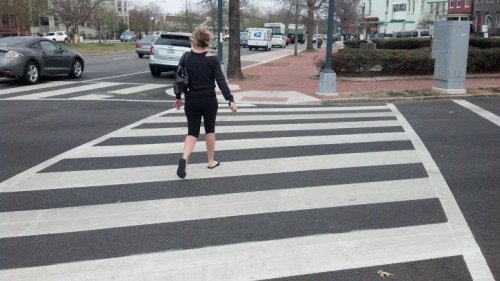 Also, notice the woman in the distance. She is not crossing at the new crosswalk, and I bet she didn’t cross at the old one, either. She crossed using a “desire path,” or the shortest distance between two points – in this case the 46th Street station and Walgreens across Hiawatha. 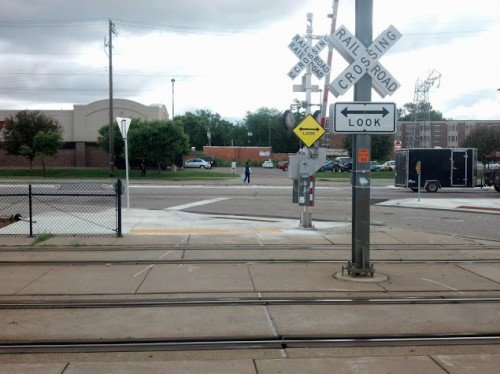 This is not unusual. Just look at the desire paths in the snow last winter at the “45th Street Crosswalk” of Hiawatha. People just cross wherever they can. This is an ongoing issue that needs addressing (median fences and pedestrian overpasses are NOT the answer). 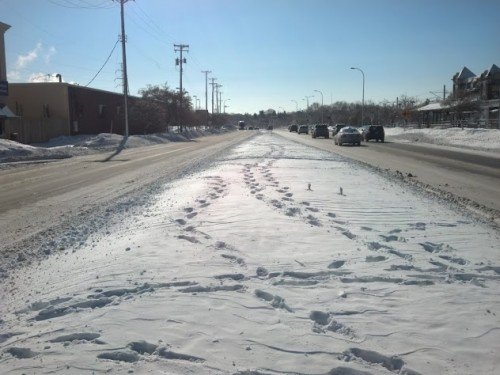 At 42nd Street, I took a video biking the RiverLake Greenway crossing of Hiawatha Avenue. (This wasn’t specifically addressed as part of this pedestrian improvement project, but is worth watching to understand what it’s like to bike this section of 42nd Street.)

Along Hiawatha, trees have been planted. You see, the original trees, planted around 25 years ago when Hiawatha Avenue was rebuilt, are still scrubby little guys and don’t produce much shade. 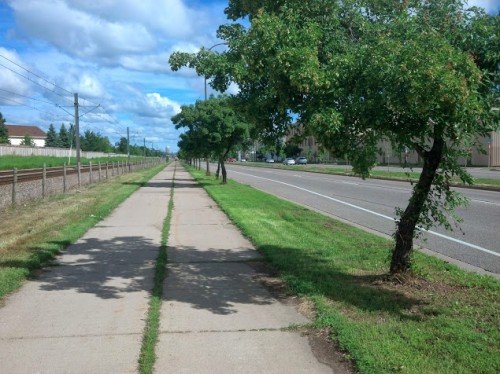 So, new trees have been planted along both sides of the street… 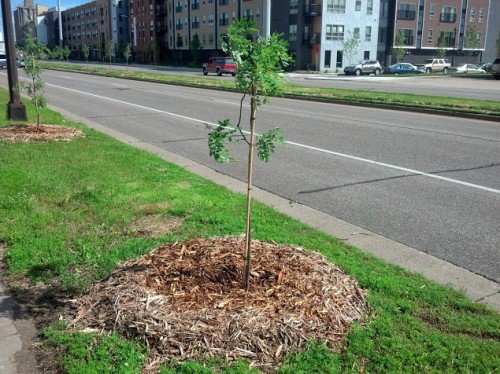 …and in the median itself. The presence of trees in the median is a first. These trees are a combination of Eastern Redbud (20 to 30 feet tall at maturity), Pinnacle Oak (can grow to 50 feet), Hackberry (not very tall), Cockspur Hawthorn (could grow to 30 feet tall) and Maple (a nice boulevard tree). So yes, there will be more shade. When and whether it will be meaningful remains to be seen. 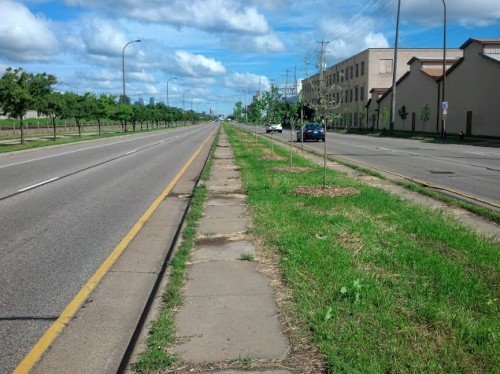 Farther on at 38th Street, here we have pedestrians crossing in an orderly fashion, having applied to do so. Success! 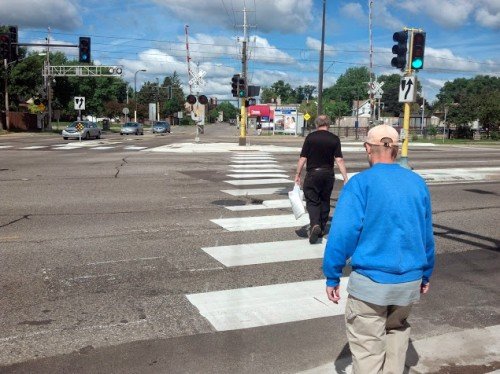 Note the crosswalk is completed but Walk signals are not automatic. One of many requests made by SENA and the Minneapolis Pedestrian Advisory Committee was that Walk signs come on automatically so pedestrians don’t have to apply to cross the street. Furthermore, we requested Leading Pedestrian Signals (the Walk sign comes on a couple seconds before the green light). So far, this has not occurred, although physically the new signals can now be programmed to do so, given the political will. 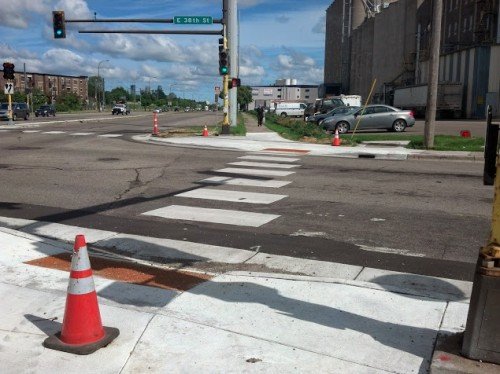 A reason I was given by traffic engineers for resisting the automatic Walk signals, versus beg buttons, is all the times that there is no pedestrian present. In these situations, the signal would still need to count through its phase, all the while cars with impatient drivers would be stuck waiting for their turn. This is a polite way of saying cars still take priority at these intersections. (Using bumpouts to reduce crossing distance is also a clever way to reduce wait times for drivers!)

Lastly, a before and after image. Below is the Hiawatha Crossing at 38th Street I frequent the most before… 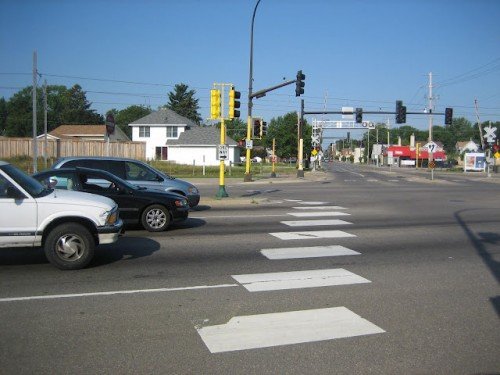 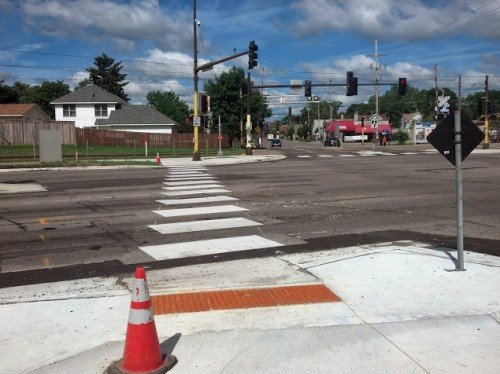 Here is the video of my first crossing of Hiawatha at 38th Street, taken a couple weeks ago (crosswalk striping has indeed been redone since then). And here is a video taken intentionally marooning myself on the center “refuge” island (Hint: don’t get stuck on the refuge island – this is a seven-minute video).

For the record, following a late 2011 post with a seven-point plan for Hiawatha and a post I wrote in fall 2012 requesting improvements as part of this project, SENA formally requested additional changes. As well, the Pedestrian Advisory Committee made the following statement:

“Recognizing both the challenges of making any changes to the configuration of Hiawatha Ave. and the fact that opportunities to make such changes come only rarely, the Pedestrian Advisory Committee recommends that additional pedestrian improvements be considered. In line with the wishes of the Standish-Ericcson {sic} Neighborhood Association, the Minneapolis Pedestrian Committee recommends that Hennepin County and Minneapolis Public Works include any or all on the following bullet points as part of its crosswalk improvements:

One of the above bullet points was implemented as part of this project. In a meeting with city and county officials early in 2013, I pressed the issue of reducing the turn radius at corner – making it a sharper corner to reduce vehicle turning speed and improve pedestrian safety. I was patiently told by a traffic engineer that trucks need to be able to make that turn, and the radii must remain a soft curve. Twice since the curbs, etc. have been rebuilt I’ve had two relatively close calls with cars turning right to head southbound on Hiawatha Avenue, the very corner I was trying to convince the traffic engineer to make sharper (and as you saw in the “marooned” video, cars do take it fast). I’m prone to cursing at cars that threaten to kill me. Remember that old Bill Cosby routine where he thinks his name is Jesus Christ and his brother is named Goddammit? After these two close calls (in which my kids were with me), I’m beginning to worry they thinking the same thing as Bill Cosby and his brother. Kids shouldn’t feel the need to curse like a sailor when crossing the street. After all, crossing the street is a right, whereas driving a vehicle is a privilege, but at least a truck can safely round that corner without getting stuck!

Ten years after light rail service begins and $850,000 later, here you are. As a project to marginally improve the pedestrian environment while not impacting traffic flow, this project is a success. As a means of making the Hiawatha Corridor and Minneapolis a more walkable, livable city this project doesn’t move the dial. And that is a real shame because people now LIVE on Hiawatha Avenue at Longfellow Station. It may not happen before my children become adults, but it seems like the only way to meaningfully improve Hiawatha is for MnDOT to decommission it as a Highway and convert it to a proper boulevard. Our grandchildren will thank us.