Earlier this summer I more or less formally resigned my volunteer position as family historian. Thirty years and several books was enough, I reasoned.

But one just doesn’t “resign” from such a “career”, I’ve learned, and the past week, which began with publication of this October 5 post on Heritage is evidence.

October 6 I was at the ND farm near Berlin where my mother grew up, helping “rescue” (a favorite term of my Dad) scrap iron for my uncle. In the junk behind a shed we recovered two pieces of farm history: the remnants of two single bottom hand plows (ploughs), the oldest of which (at right in photo below) probably turned the first furrows when Grandma and Grandpa began to plow the virgin sod prairie in 1905. This plow would have been pulled by a team of horses, and the accompanying wooden accessories have long since rotted away, but the business end remains, and is now safely stored in my my uncle’s shed. A few days later, I saw a similar though larger plow in Ada MN, a monument to the pioneers who broke ground in that area. That is the second photo, below. (Click on photos to enlarge)

Both ploughs were surprisingly light and in surprisingly good condition, most likely having laid outside for as much as 100 years or more. When I picked them up I was symbolically reconnecting with my grandparents and their heritage. 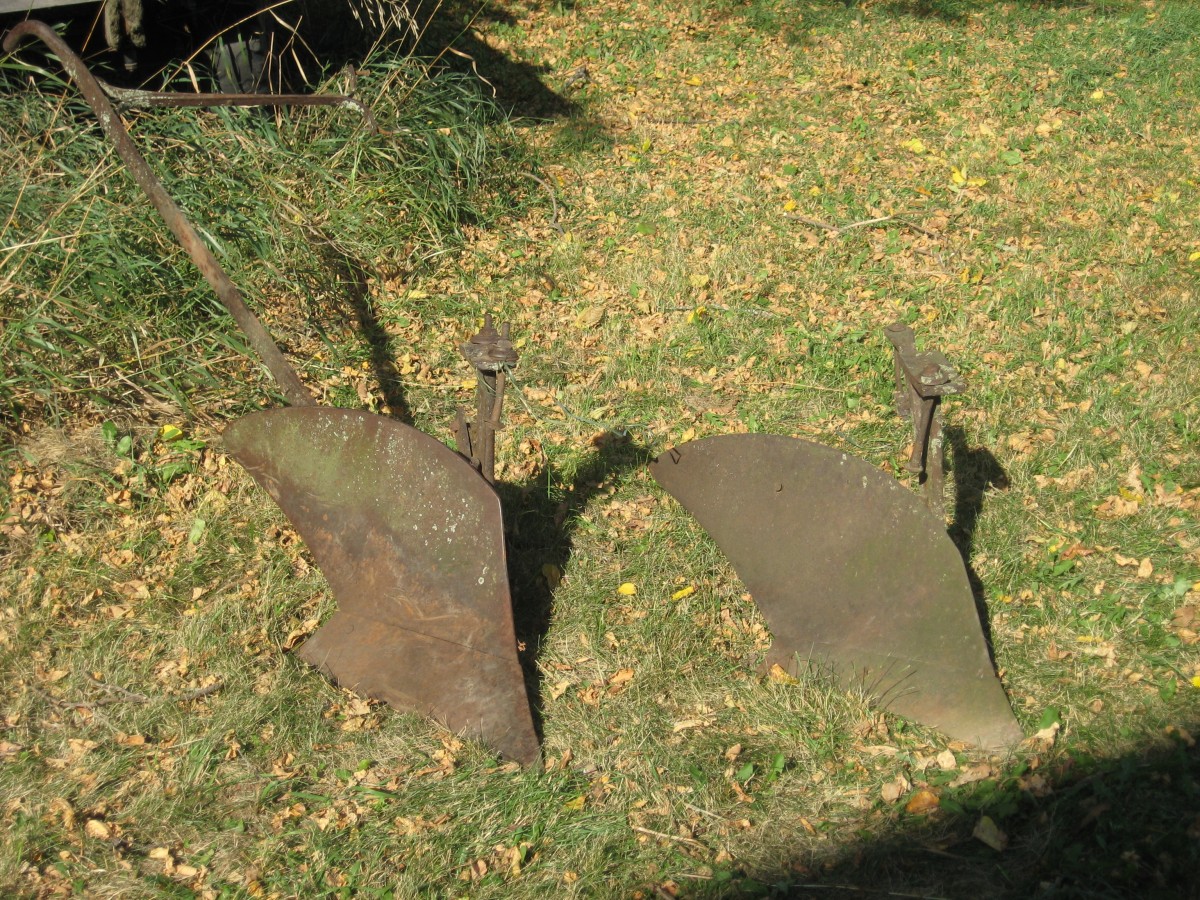 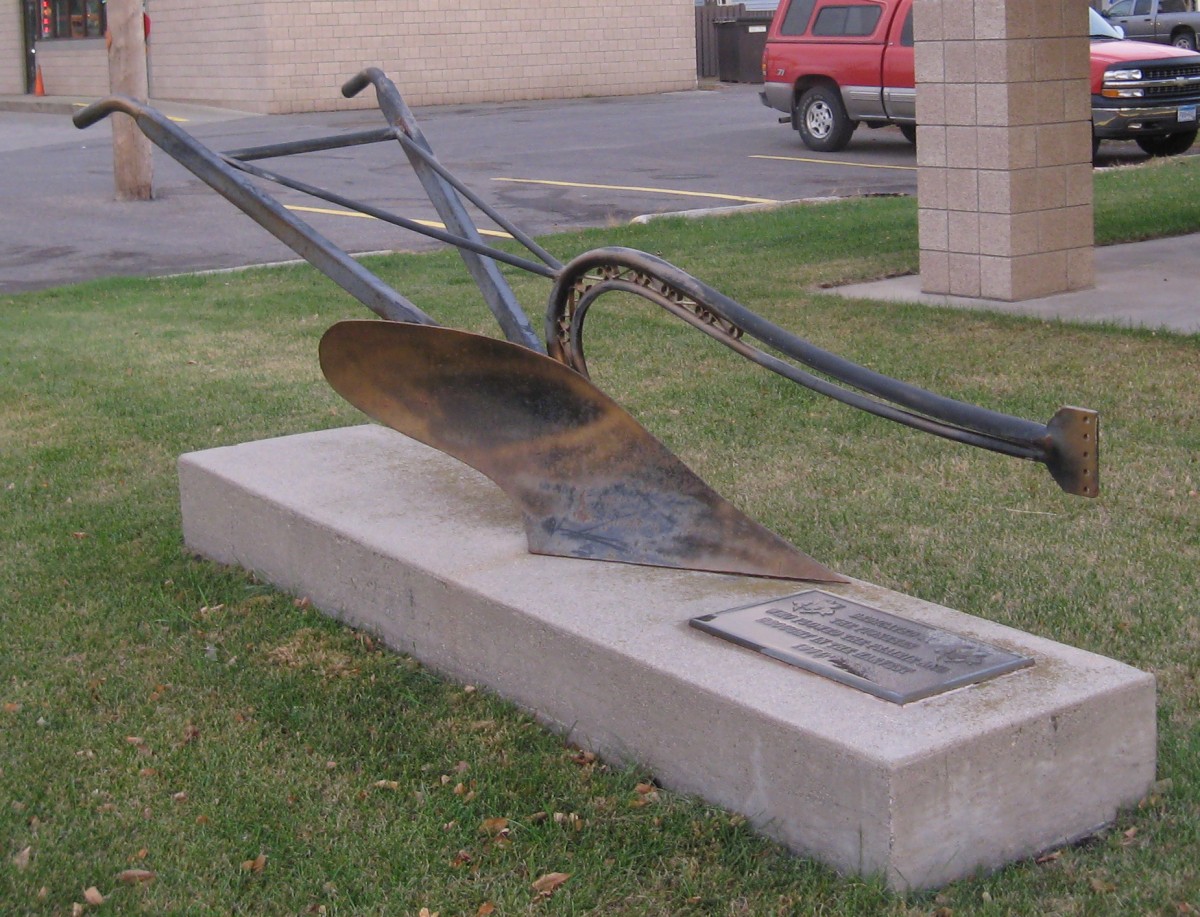 A few days later, in Park Rapids MN, I had the privilege of helping lead a group of 59 people in a conversation about Heritage. The base of discussion was the list found here. There was a vibrant and rich conversation among the participants about what their heritage was, and what it might mean. Our 90 minutes flew by. Here’s a photo of the participants in the session: 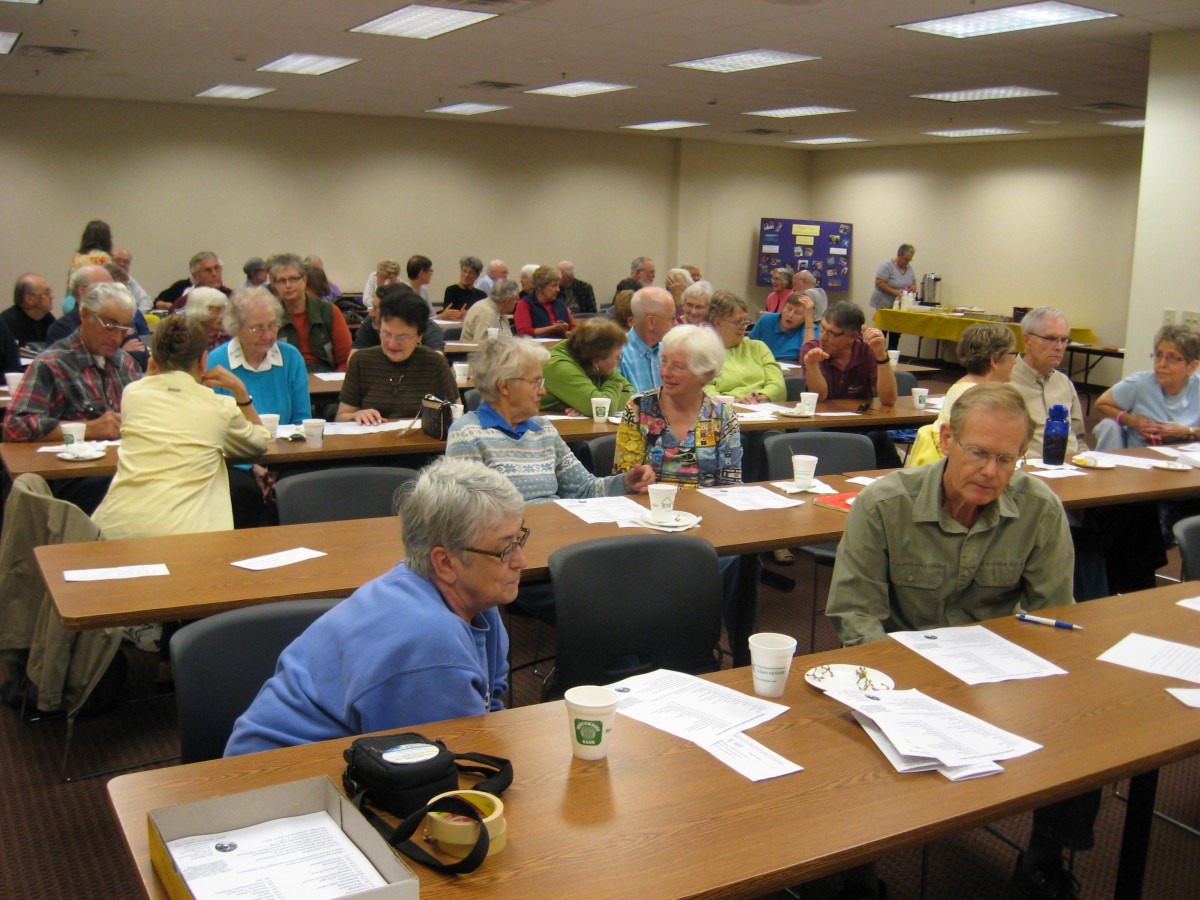 The very act of gathering and conversing about shared and diverse elements of heritage became a community building exercise in itself, one said.

Between October 6 and 11 came other examples of how the melting pot heritage of America is very rich.

October 7 and 8, I participated in the Midwest French Festival and Convention in Moorhead and Fargo. The photos represent the tiniest view of a vibrant Festival. In order of appearance:
1) Timothy and Doree Kent discussed the Voyageur, Native and Metis life of the 17th Century before several hundred students and adults. 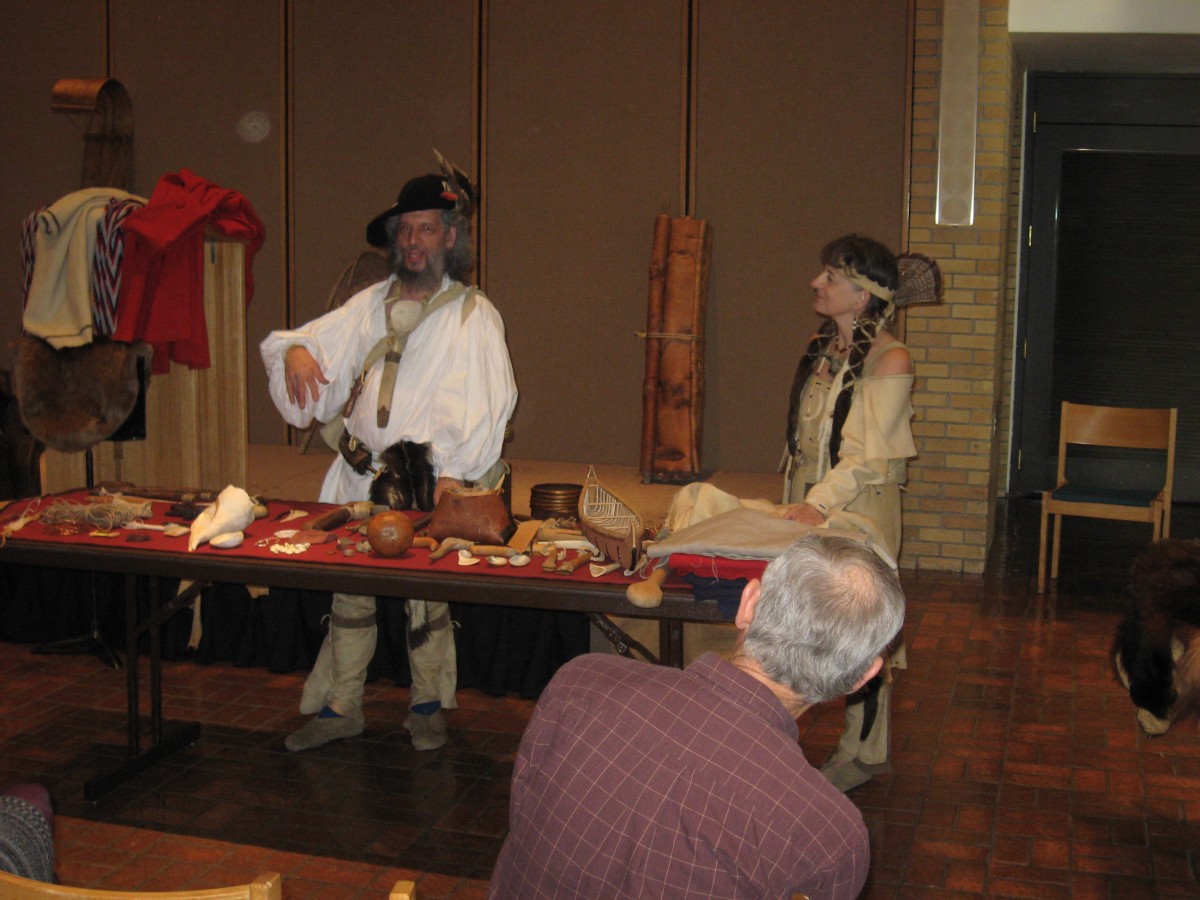 2) Several persons explained, in English, French and Norwegian, the statue of the Norwegian Rollo across from the Sons of Norway Lodge in Fargo. (Rollo had much to do with the history of the French province of Normandy.) 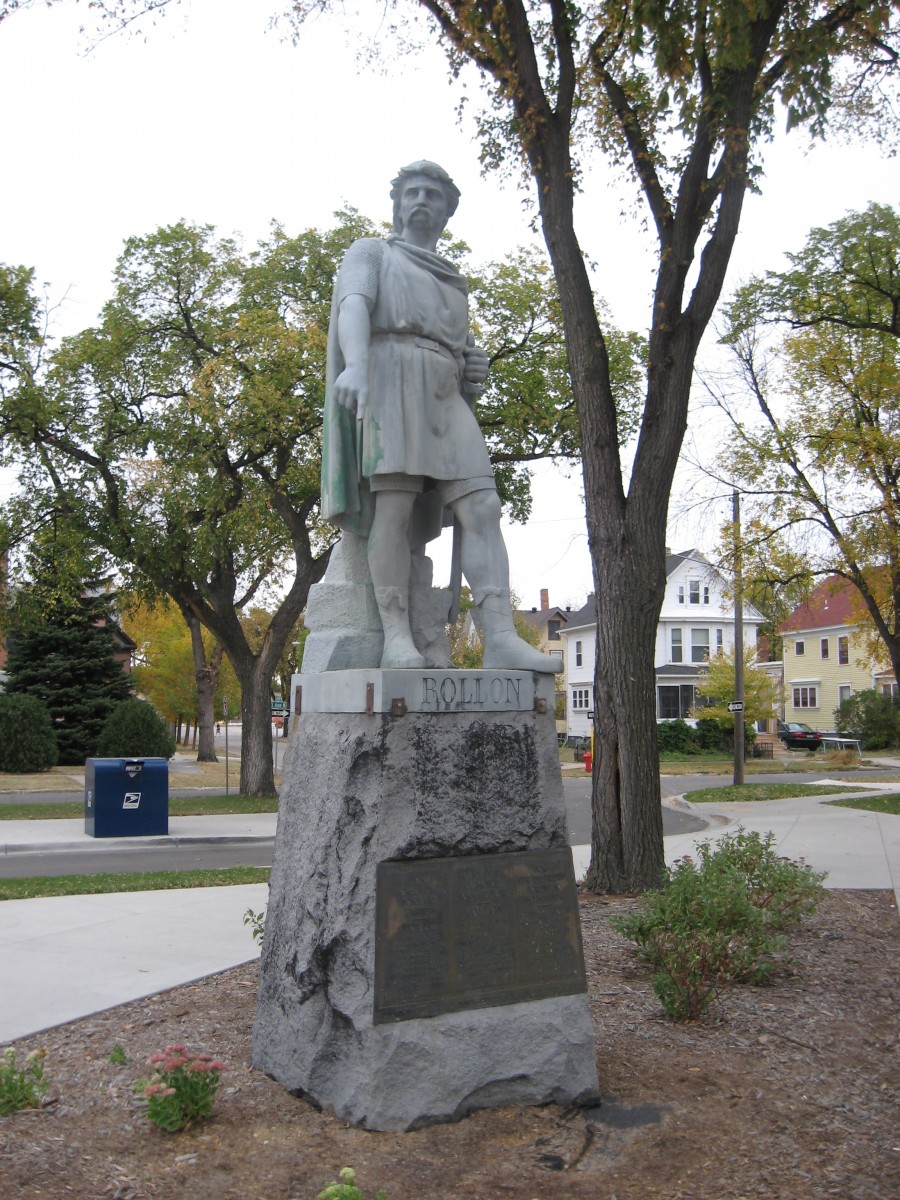 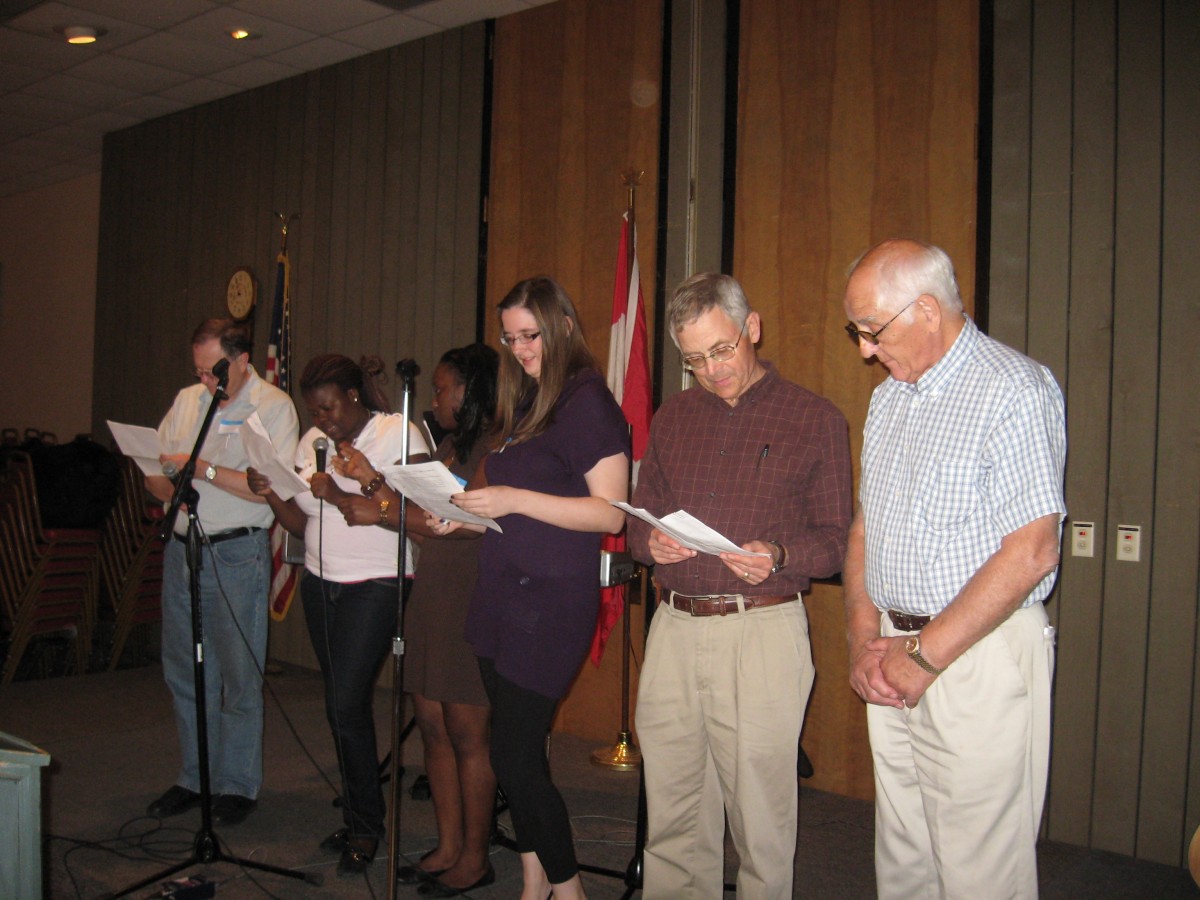 Reading the history of the Rollo statue in English, French and Norwegian, October 7, 2011

3) Parishioners at the rural Wild Rice ND parish of St. Benoit (Benedict) gave a most interesting tour of their Church, center of a community with a rich and long French-Canadian heritage 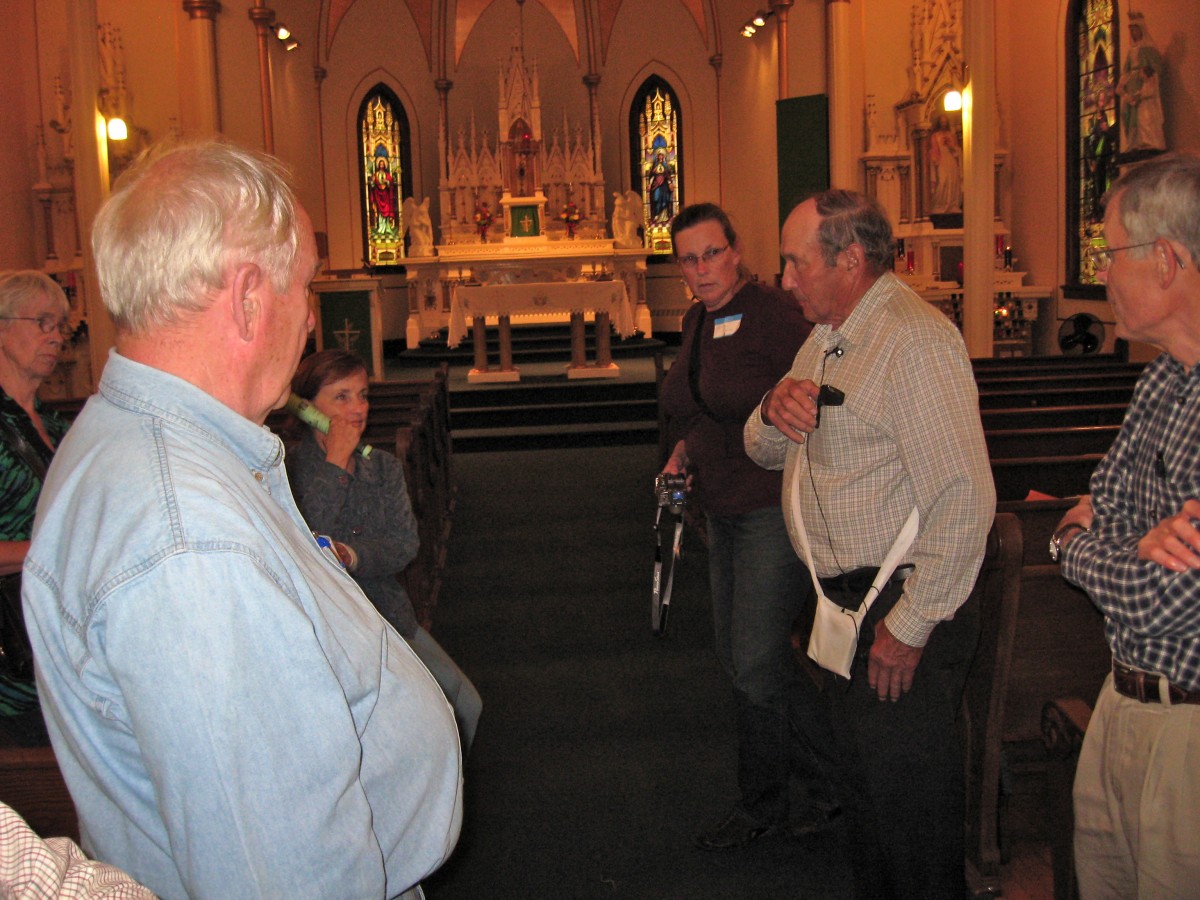 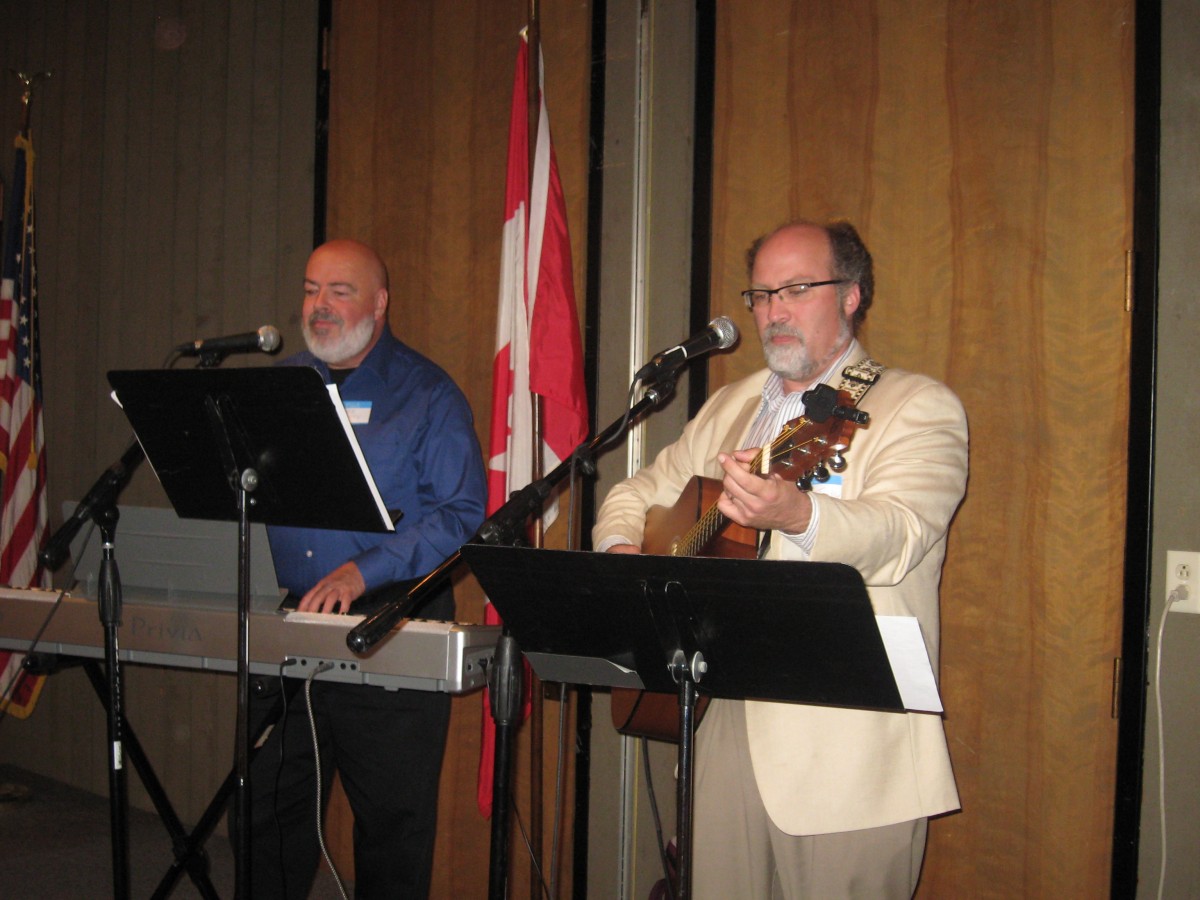 Dave Bezotte and Dan Truckey perform at the conference, October 7, 2011 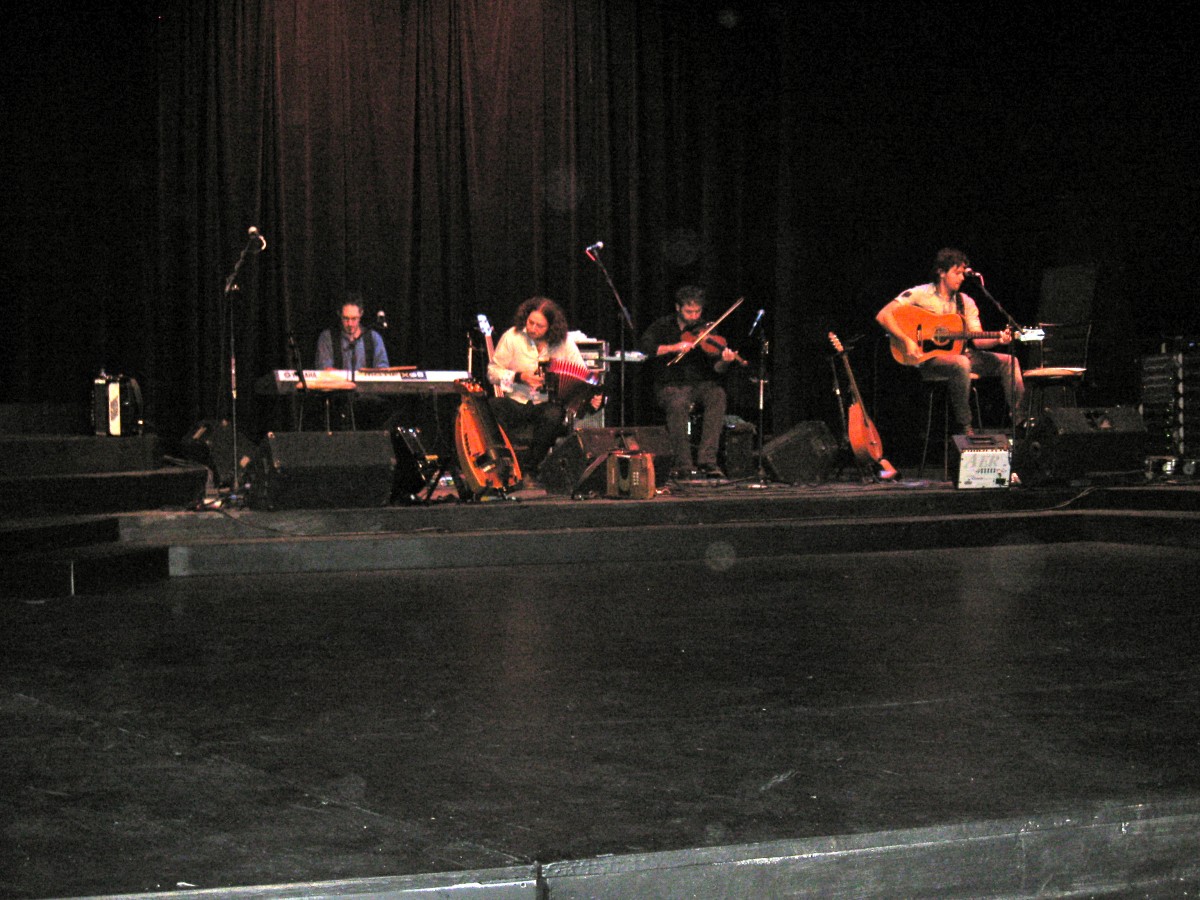 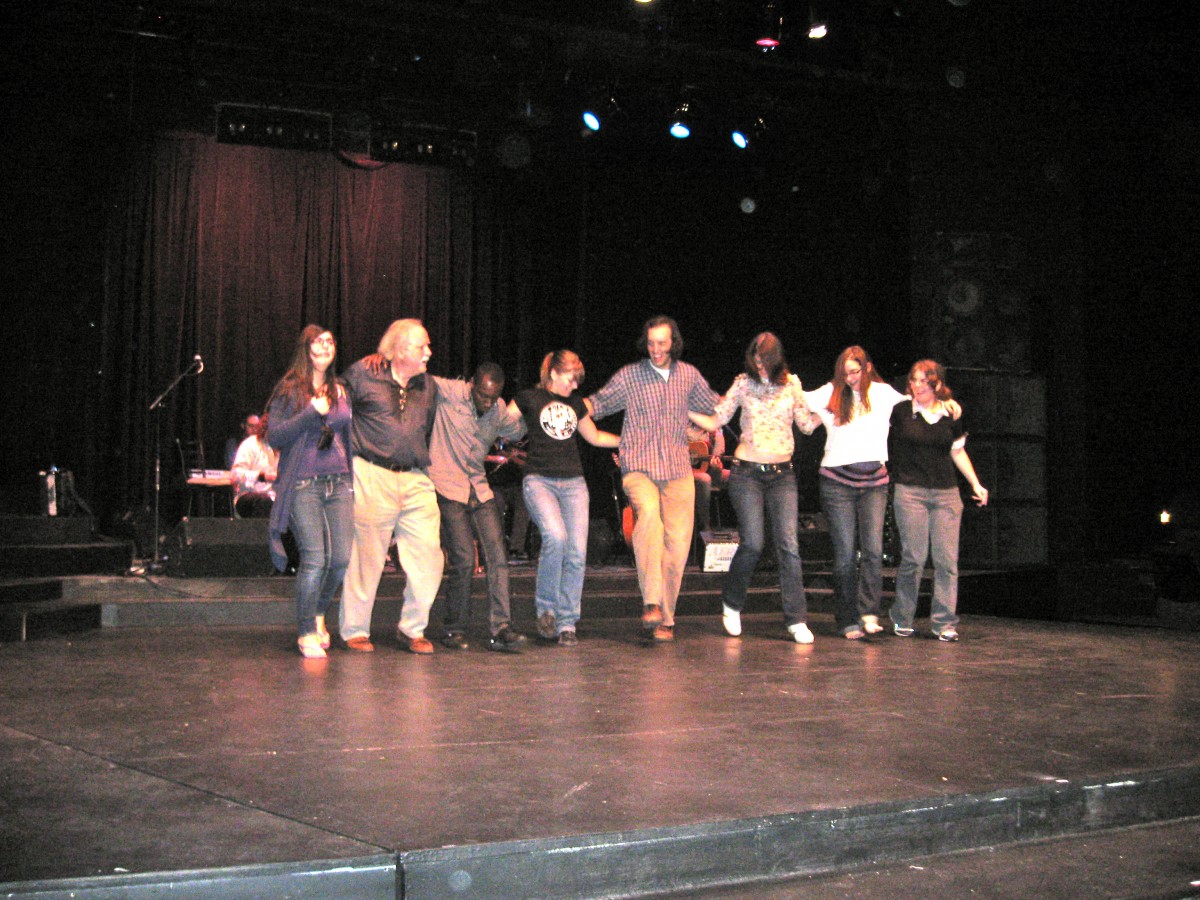 There is, literally, no end to the potential for conversations about our heritage, and the conversations are interesting and indeed essential. We are, indeed, who we came from; and we live on in those who descend from us.

October 10, at Itasca Park, at the headwaters of the Mississippi River, we came across a family celebration. We don’t know the persons names: the elders had their first date at the headwaters in 1948. She was 17 from Osakis MN, he 21, from Floodwood MN. They married, lived and are now retired in California, and they were joined by some of their family. Their family, joined with others from many cultures, many countries and many places in the U.S., make up our collective country and world heritage.

Let us celebrate Heritage in the broadest and most positive sense. 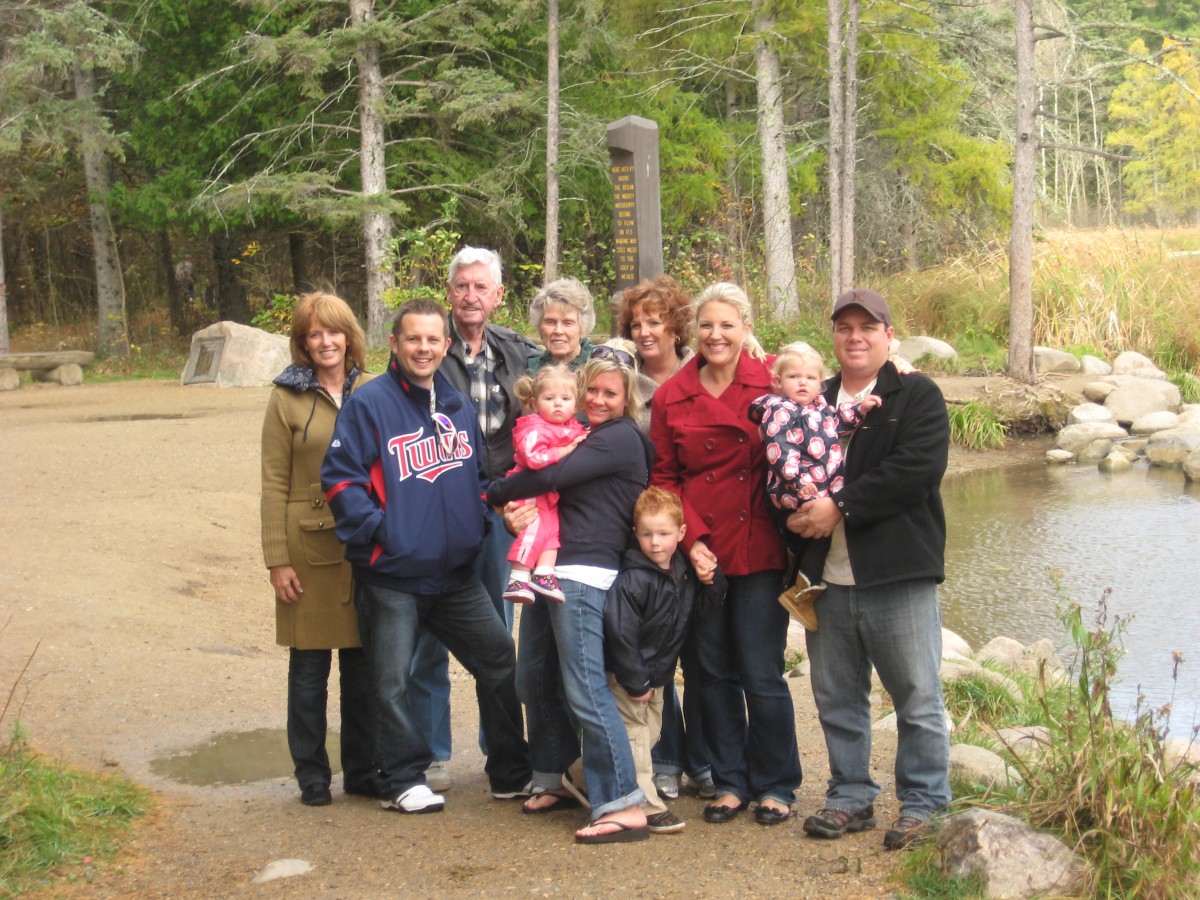 At Lake Itasca MN, Headwaters of the Mississippi R, October 10 2011