The former Stasiu’s at 2500 University Ave. N.E. in Northeast Minneapolis underwent a makeover back in 2010 that transformed it into Stanley’s Bar Room, but it hasn’t lost its neighborhood tavern character. Stanley’s bills itself as a craft beer bar, with 32 craft beers on tap, but it is decidedly not one of those yuppified gastropubs.

The menu makes a few nods towards trendiness, with items like a caprese salad with homemade pulled mozzarella ($8.79) , and another with marinated chioga beets, arugula, mint leaves, crushed pecans, bacon and peas ($7.79). But mostly this is the kind of fare that neighborhood taverns have been serving forever: burgers, onion rings, cheese curds and chicken wings; the usual assortment of sandwiches (BLT, Reuben, blackened chicken breast, etc.) and entrees of barbecued ribs, pork chops, sirloin steak and fettucine alfredo. Entree prices are very reasonable, ranging from $7.79 for fettucine alfredo (chicken breast or shrimp for $3/$4 extra) to $16.79 for a full slab of barbecued ribs with a couple of side dishes.

It also has the kind of ambience you expect in a classic neighborhood tavern, with big flat-screen televisions everywhere you look, mostly tuned to sports, and lots of activities — team trivia on Mindays, Bar Bingo on Sundays, Tuesdays and Wednesdays, karaoke on Thursdays and a meat raffle on Fridays. Happy hours are from 3 to 7 p.m. and 10 p.m. to midnight Sunday through Thursday. 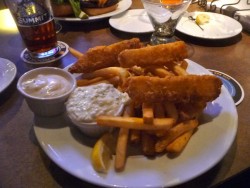 The appetizer of deepfried walleye bites ($8.49) had a crisp flavorful breading, though the fish itself tasted a bit fishy. I was much happier with the entree of fish and chips ($9.79), three strips of beer-battered moist and tender cod, accompanied by a big pile of first-rate french fries. Monday night is half-price burger night, so a friend ordered the hamorker (regularly $9.79), a half-pound patty topped with cheddar cheese and the bar’s homemade pulled pork. She ordered it medium well, which may have been a mistake – the burger was a bit dry.

But the real draw here is the beers. I had a chance to try a couple of local brews I had never tasted before – a smooth dry-hopped Schell’s Burton Ale, made by the New Ulm brewery in the style of Bass Ale; and Surly Abrasive, an aggressively hoppy, highly aromatic (and alcoholic) double IPA that brought back happy memories of English pubs. According to their website, Stanley’s hosts beer events pretty regularly, tapping kegs of specialty beers from local breweries.

Of course, all that beer has to go somewhere, and Stanley’s men’s room features a set of the most impressive classic porcelain urinals I have ever seen anywhere. These even have a little ledge to place your glass while you attend to more pressing business.