Brothers Garrett and Jonah Seppanen play on the 1960s-era monkey bars that were torn out of the park at Hendon Avenue and Branston. This photo was taken in 2010.

On May 2, the bench, slide, jungle gym and swings were removed without notice from “Monkey Island,” one of the two little parks on either side of Hendon Avenue at Branston Street in St. Anthony Park.

The equipment was the oldest in the city and the playground’s jungle gym the last of its kind to be removed from municipal playgrounds. Despite the close proximity of College Park, 2223 Carter Ave., which has more, newer equipment and is only four or five blocks away, the emotional response to the stripping of the 1960s vintage playground was visceral; a common descriptor was “devastated.”

Caroline Berger, who grew up on Branston Street and now lives in her childhood home, played at Monkey Island—which is officially known as Hendon Triangles—as a child. Her children played there and she had hoped that her grandchildren would play there.

The small playground was good for small children who did not have to compete with bigger kids for the equipment, Berger said. The park is elevated, allowing neighbors to see what’s going on and keep an eye on neighbors’ kids, as well as their own. Another amenity is that it is on a cul-de-sac that does not get a lot of traffic, so it is safe to cross the street to the park, she said.

Workers removing the equipment told passersby that the city had no plans and no money to replace it. The Department of Parks and Recreation has funds only for upkeep, and the city must sell bonds to finance any new materials. 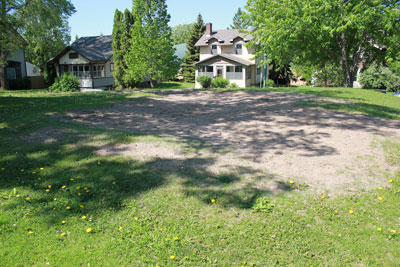 The little park was well-loved and well-used. As news spread shortly after the dismantling, emails flew to the St. Paul City Council, the mayor, the parks commissioner and anyone else people could think of. Glen Skovholt, a former Metropolitan Parks and Open Space Commission chairperson, called his friend, Mike Hahm, director of the Department of Parks and Recreation. Hahm replied quickly and met with the neighbors on May 8.

At the meeting, Hahm and Gary Korum, operations manager for St. Paul Parks and Recreation, apologized for the way events unfolded. Normal department procedure is to secure the play site and then notify residents of the surrounding community at least four days before removing defective equipment in a city park, Hahm said. But the work order was “out of alignment with the communication,” and the demolition happened without warning.

Korum, who manages 77 city play areas and five parks operations safety inspectors, explained that all city play areas are inspected at least once a week for safety issues. As soon as a problem becomes known to the department, the city is liable for anything that happens because of it, so safety issues must be resolved quickly.

In early April, the inspectors found that the hangers for the swings were broken and the piping holding them was rusted. Furthermore, the 40-plus-year-old jungle gym posed a “hanging risk,” and the slide was also found to be dangerous. The decision to remove everything was a foregone conclusion. (Although, some neighbors questioned what was wrong with the bench?)

Moreover, the cost of replacing just what was there is estimated to be nearly $100,000. Both the site and the equipment would have to be handicap-accessible, necessitating a ramp and approved “fall zones” of soft material. The city has a process for applying for financing, but this year’s grant cycle has ended and the soonest anything could happen is 2014 or 2015, pending city approval.

One way to reduce the cost of new play equipment would be to put it on the other side of Hendon, which is flat and so no ramp would be needed. But that grassy area (which at one time had a tennis court and skating rink) is used for playing ball and has more traffic on adjacent streets. Another option mentioned at the meeting was using “natural” materials, such as sand, rocks and logs. Such materials would not be out of compliance with accessibility regulations because they are not manufactured, but they may not be as appealing to children. 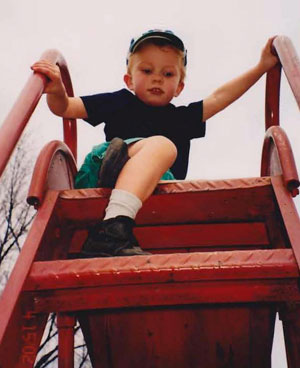 Left, a young Leo Wieffering climbs down from the vintage slide in 2006.

The original equipment was bought in the early 1960s by the St. Anthony Park Association, which spent $6,000 to buy play apparatus for three neighborhood parks: Monkey Island, College Park and Langford Park, according to Fred Steinhauser, an association member who was instrumental in buying the equipment.

At the May 8 meeting, Jon Schumacher, executive director of the St. Anthony Park Foundation, suggested that a small representative group start brainstorming about fundraising to help purchase new play equipment and work with the city to see if processes could be sped up. Deanna Seppanen agreed to organize the group and Hahm said that he would meet with the group to help make things happen sooner. At the least, it was hoped the group could raise enough funds to purchase benches for the park.

Seppanen’s group met on May 14 and decided they want children to “have a similar experience [as the former playground] and are going to work with the community and city to come up with an interesting design as quickly as possible.” The group is aiming to raise $50,000 to $60,000 and then apply to the city to install the equipment and build the ramp.

Michelle Christianson is a longtime contributor to the Park Bugle and a neighbor to Monkey Island.