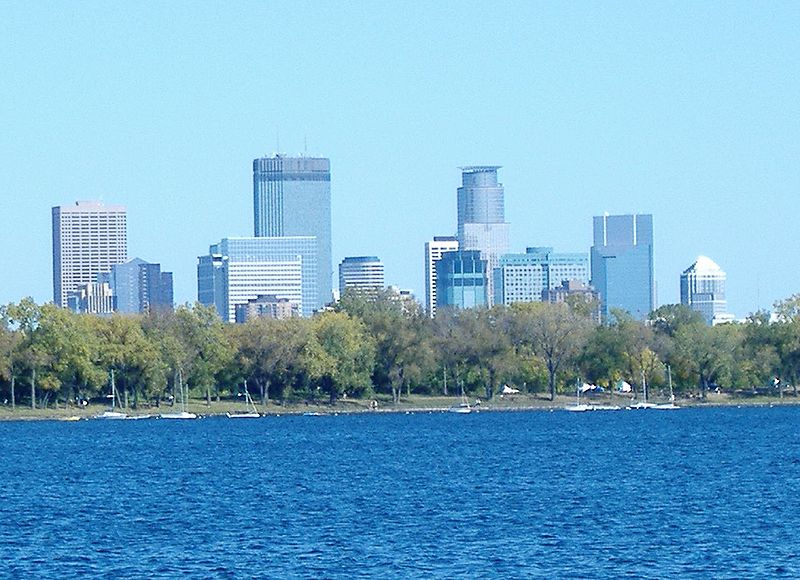 In early 1861, Henry David Thoreau, the renowned naturalist, abolitionist, philosopher. and author of Civil Disobedience and Walden, found his health in decline.  He was diagnosed with tuberculosis in May of that year.  His doctors thought that a change in climate might help him recover.  At that time, Minnesota was marketed as a desirable part of the western frontier with an abundance of fish, game, pristine lakes and fresh air.  Thoreau decided the change would do him good.  He also wanted to study the plants, animals, and American Indian culture before this part of the frontier vanished completely.

He took the 17-year-old son of his dear friend Horace Mann, named Horace Mann, Jr., along to assist him in his frail state.  They left Concord, Massachusetts on May 11, 1861 and took a train across the country to the Mississippi River town of East Dubuque, IL.  They completed their journey by riverboat up the Mississippi River, arriving in St Paul on May 26th.  Thoreau and Mann spent almost a month in the Twin Cities.  They arrived at Mrs. Hamilton’s Boarding House, located near the Lake Calhoun shoreline, on June 5th.  They spent days taking an extensive inventory of the flora and fauna of the area.

Their ambitious travels ultimately took a toll on Thoreau’s health.  He arrived back in Concord exhausted and ill on July 10, 1861.  Thoreau never did fully recover and he died on May 6,1862.

Few early European settlers had previously documented any details of the natural history of the area.  Thoreau’s extensive field notes have been invaluable to more recent efforts at prairie/habitat restoration.  (The Minnesota History Museum has the complete collection of these notes in their archives.)

The following is a letter from Horace Mann Jr. to his mother regarding their natural discoveries and observations around Lake Calhoun.  The Chain of Lakes are still considered critical habitat for migratory birds.  This historic record documents the Lake Calhoun ecosystem as it existed in the 1860s.

You see by the date of this letter that we are staying at a house on the edge of Lake Calhoun.  It is a beautiful sheet of water, perhaps a mile and a half or three quarters the longest way and nearly a mile the other way in breadth; it has an outlet by which it MTS [empties?] itself into Lake Harriet, which lies a little ways to the SE of here, and that again MTS into the Minnehaha and goes over the falls.  We are staying at the house of a Mrs. Hamilton, a widow, and one of the first settlers near this lake.

The house is surrounded with very thick woods which is full of great big mosquitoes, so when you walk in them, particularly near nightfall, they swarm around you in such a cloud that you can hardly see through them.  There are also a great many pigeons in the woods back of the house, (though I should hardly know them from a mosquito here by size) which are breeding, and I found the nest of one this afternoon which had but one egg in it which I took.

The lake is full of fishes and we have them at every meal almost.  I went into St. Anthony this morning where I put some birds and clams in alcohol and got some blotting paper to press flowers with and I have just been putting some away to press under the bed post.  The trees around here are not very large ones, and the fires seem to have run through the woods all around here and killed a great many of the trees.  The prairies burn over most always in the spring or fall of the year out here.  The “oak openings” on the prairies consist of small oaks scattered around at some distance (1-10 rods) from one another and where the fire has not run for several years the hazel bushes spring up; also little oaks and aspens, and after a little longer basswood trees, which I think are planted by the little spermophili (stripped squirrels) carrying the nuts from the woods to their holes to eat, and then the brush begins to get thicker and thicker until it is very hard to get through it.

You want me to tell you how things make me feel but I will not do so about the mosquitoes.  It is pretty warm weather here all the time now.  We had a thunder storm last night but I did not know it till I got up this morning.  Mr. Thoreau and I went in swimming this afternoon and then we went to walk and we came to a pond hole near some woods which was full of shells and frogs; there were principally two kinds of shells, the limneas, I do not know which species, but they were very beautiful, and shaped something like this [drawing].  I have drawn a miserable picture but I shall bring a lot home and then you can see them.  The other kind is a large planorbis or trumpet shell [drawing].  I shall collect them also.  The frogs were the ‘palustris’ and ‘halecina’ or the two spotted frogs and another kind, a brown one which I do not know.  Mr. Thoreau continues to get better and I am very well of course.  We drink lake water here.  I will write more before I send this letter, so Good Night,