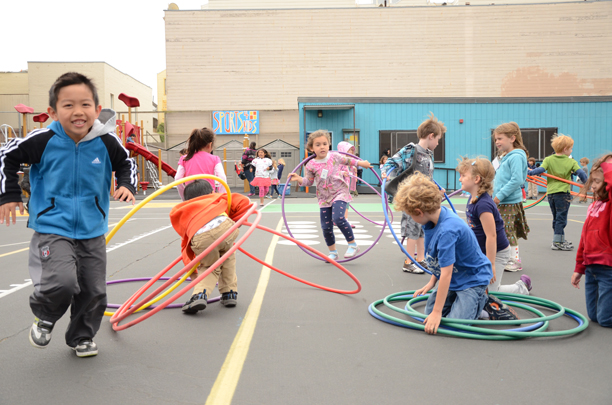 How can we help young people think thoughtfully about this year’s vigorous, sometimes bitter election campaigns?

This can be a great week to help young people gain a better understanding and even respect for what’s happening.

Being in schools two to three days a week, I have a chance to talk with, and listen to youngsters. (Thanks to Playworks, which also works with schools, that supplied the photo accompanying this story).   My visits to schools and conversations with young children lead to the first suggestion:

• Ask youngsters if they have questions about the election.  When I did this recently with some six- and seven-year-olds, I learned that some wondered if the winner of an election would hurt or even kill the losers.  These young people had heard very negative ads on television.  They’d also heard news about the civil war in Syria and Somalia.  Some were children whose families had emigrated from Africa.

They put the ads and the war together, and wondered if we would have a war here.  This may sound far-fetched, but these youngsters were concerned. But I’ve talked with other young children, not from immigrant families, who had similar questions.

It was a great opportunity to talk about the American tradition of battling in elections, but then accepting the results and moving on, peacefully.  The children were relieved to hear about this.  They had been worried.

• Give youngsters a chance to be involved.  When our children (now adults) were younger, we included them in various political activities.  These included, for example, going to fund-raisers for candidates and helping distribute campaign literature.  We always gave them a choice about participating, and offered different options.  This led to lively family conversations, along with a belief that being involved is a good thing.

Most campaigns welcome help, whether they are at the local, state or national levels.  With the Internet, it’s easy to find out more about almost any campaign you want.  You and your youngster(s) can contact the campaign and ask about ways to be involved.

• Help youngsters develop an accurate historical perspective.  This may sound cynical and there are many ways to interpret this  But the fact is, many of the most dire predictions have not happened.  For example, when Richard Nixon resigned the presidency, some people predicted it would be decades before the Republicans won the presidency.  It wasn’t.  Vice President Gerald Ford took office in August, 1974, followed by Jimmy Carter.  In the next election, 1980, Republican Ronald Reagan was elected.

In a somewhat similar way, some predicted it would take decades for the Democrats to recover from the landslide loss of Democratic Senator George McGovern, who recently died.  President Richard Nixon received more than 60 percent of the popular vote when he defeated McGovern in 1972.  Just four years later, Jimmy Carter, a Democrat, won.

One part of perspective is to recognize progress that has been made.  This country started out with only white males who owned a certain amount of property being allowed to vote.  There have been huge battles, sometimes taking decades, but voting rights have expanded to include women and people representing communities of color.  History can be boring, but it also can be encouraging.  We don’t need to say everything is wonderful (it’s not) to recognize, and to help youngsters understand, that there has been progress.

We’re almost never totally satisfied, or dissatisfied by election results.  But we can, and I think should, help young people understand that despite our problems, people all over the world admire and appreciate the value of voting.