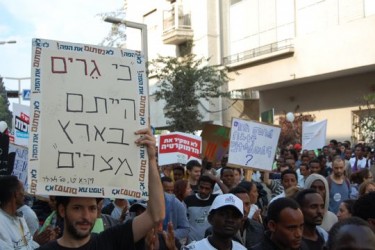 Gabe Kravitz, one of about 100 activists with Right Now: Advocates for African Asylum Seekers in Israel, wants the attention of the Israeli government. The goal is twofold: Right Now wants Israel to grant refugee status to asylum seekers from Sudan and Eritrea, as well as a fair refugee-status determination process for all.

Gabe will be at Adath tomorrow night to speak on this topic, as part of Adath’s Sampler of Jewish Culture.

“We want to see Israel fulfilling the vision it was founded to be,” says Gabe, who became interested in this topic when he lived in Israel in 2010-2011. “The State of Israel was founded by refugees. We can’t forget that.”

But there is debate in Israel as to whether or not these asylum seekers are actual refugees fleeing civil unrest and genocide in their countries, or if they’re just opportunists looking for work.

“They say these people are economic infiltrators and economic migrants who are not from places that are genocidal,” says Gabe. “But these people are fleeing unrest. [Just to get to Israel] many walk through Sudan, are smuggled by human traffickers through Egypt and the Sinai Peninsula, and along the way many are abused, raped and held hostage.”

The number of asylum seekers living in Israel is about 57,000 people, according to August 2012 data from the Population, Immigration and Border Authority. An estimated 15,210 of these asylum seekers are from Sudan, 35,895 are from Eritrea, and 6,000 are from other countries.

“The most often repeated Jewish value in the Torah is our collective responsibility to not subvert the rights of the refugee/stranger/other in our midst since we were strangers in Mitzrayim. These people were literally refugees that came through Egypt and the Jewish state is subverting their rights.”

Asylum seekers who make it to Israel are given deferred deportation orders while they await a determination of their status. Thus, their stay in Israel is legal; however, the status does not allow them access to formal work permits, health care or welfare services. Asylum seekers are stuck in a legal limbo called “temporary collective protection.”

Gabe’s presentation at Adath will include movie clips and thoughts on how this issue is playing out in Israel, especially how it is affected by the elections there. He will also discuss what American Jews can do to help. “As American Jews, we have an ability to influence change,” he says.

Learn more about African Asylum Seekers at Adath’s Sampler of Jewish Culture, 5:30 PM – 10 PM, Saturday, January 19, 2013. There will be 11 other topics of interest throughout the night. Cost: $20 at the door. See adathjeshurun.org for more info.

Top photo: The sign in the forefront has the biblical passage “Since you were strangers in the land of Mitzrayim.”

Sheree R. Curry is an award-winning journalist whose work has appeared in major publications from the Wall Street Journal to the Jerusalem Post. She coordinates marketing and communications for Adath Jeshurun Congregation, and lives in Maple Grove with her two sons.