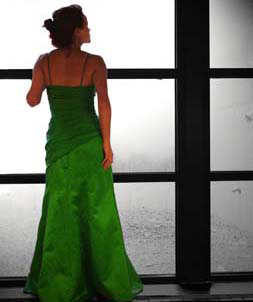 Playwright Ellen McLaughlin is asking you to forget what you learned in tenth grade World Literature. This may be easier for some than for others.

It turns out that Helen of Troy, the face that launched a thousand ships, was actually Warp Whistled to an Egyptian hotel suite by a jealous Hera, and that Paris absconded across the Aegean with a Helen-duplicate. Fast-forward seventeen years, and the original Helen is still cooped up inside the same bedroom with the same lousy cable channels, while the entire Trojan War has come and gone with thousands (on both sides) dying for the honor of a simple doppelganger.

This is not an easy show. That’s not meant as a pejorative, and 20%’s fan base won’t read it that way either. McLaughlin packs a lot into her script, and the result is as subversive as the themes she explores. The historical “canon” would have readers register Helen-the-celebrity and ignore Helen-the-woman; here, the woman takes center stage as her unseen celebrity wreaks havoc outside her room. Literary buffs would relish in the poetry of antiquity and throw away common speech; here, Helen speaks in an everyday tongue while heightened prose fights to make itself heard. Objectifiers would qualify Helen by her ornamentation (read: beauty) and not by her innate woman-ness; here, Helen menstruates, damnit. Anyone who is put off by terms like “postmodern simulacra,” “privileged authorship,” and “politics of desire” should probably look elsewhere for an evening out.

For the rest of us: buckle up.

There’s a lot to like in 20% Theatre’s Helen, running through February 12th at Gremlin Theatre. Design elements put functionality ahead of flair, and Erica Zaffarano’s scenic design of a marbled Egyptian hotel suite and Renata Schaffer-Gottschalk’s costume design of contemporary spa are effective in their simplicity. Leah Adcock-Starr’s direction succeeds in keeping movement in a play that, boiled down, takes place in a single room with a single exit. Ali Rose Dachis and Mary Cutler, notably, turn in fantastic performances; Dachis playing Io, a sheperdess-turned-cow-turned-future-Zeus-squeeze and Cutler playing the room attendant who eventually functions as McLaughlin’s stoic meta-storyteller.

Yet for as sure-footed as some of this Helen is, other parts begin to shimmy under its own weight. Athena’s splashy lighting palette is a welcome change of pace, but other lighting choices feel arbitrary. Characters constantly futzing with lip liner at the corner vanity would read great cinematically, but theatrically the recurring business stays small and aggravating. Meanwhile, Gretchen Emo does a decent job as the title character throughout, yet it’s her pontifications when she’s left alone that particularly fall flat. The fourth wall remains thick and constant during these solo bits, and the choice to do so keeps the audience as voyeurs on Helen’s condition rather than participants in the drama, forcing the audience’s perception of this Helen to never fully escape a generalized “everywoman” branding.

Which, one could argue, is the whole damn point.

This production is at its most successful when the show can simply breathe. Yes, it’s a lot to assimilate over an intermission-less hour-and-forty-five-minutes, and yes, seminal feminist issues keep recycling themselves in all their didactic glory, but these muscles of theory hang on a sturdy skeleton of a script, and everyone in the room (performers and audience) should trust the perfect fit between a playwright who takes no chances with her message and a company that takes no prisoners with its mission. Beyond that, there’s something about this play, if not this specific production, that’s ultimately fun; a historical “what if” that is at once academic and popular, reverent and profane, alienating and sympathetic. The show’s punches come not from its action but from its logic, whether it’s a former cow reminiscing about the gadfly who showed her the world, a cuckold husband arriving just as his wife registers the pain she caused in his life, or a hypothetical coda suggesting that Helen will eventually share a meal with blind Homer (a Grecian physically incapable of male-gazing), saying to this long-silenced woman the magic words: “tell me a story.”

And even if her story is the same as the one from our tenth grade textbooks, it’s finally, beautifully, hers.