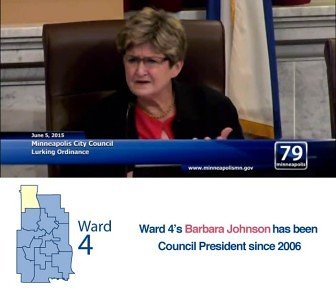 It was almost a unanimous vote.

Council President Barb Johnson, who represents Ward 4 in North Minneapolis, slipped up moments after her long speech about why she was voting “no” on repealing the city’s “lurking” and “spitting” ordinances, saying “aye” before changing her vote on the official record.

The Council President was the lone vote against repeal of the ordinances, which have been used disproportionately against city’s African-American population.

After the vote, the problematic ordinances are officially off the books in Minneapolis. But that didn’t stop Council President Johnson from making a few questionable remarks.

See them for yourself (or read the attached transcript: barb johnson comments to city council):

People are concerned about their property. Every week I get emails from people who routinely, if they leave their car in the driveway, they come out in the morning and their car has been gone through.

The joke of it is that everybody always says, “and they didn’t take my CDs, haha,” because the music tastes are different.

This is something that is concerning of people. They also leave their car unlocked, so that they don’t break their windows. 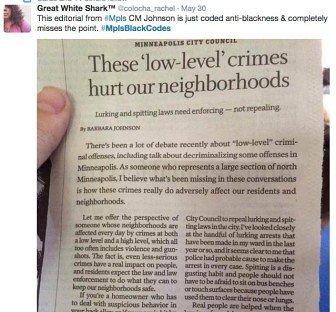 But for Nekima Levy-Pounds, the newly elected head of the Minneapolis NAACP, Johnson’s joke points to troubling assumptions.

“People who were present found her comments to be offensive,” Levy-Pounds, a law professor at the University of St. Thomas, told me this week.

“She inferred a couple of things that gave a racial aspect to some of the crime happening on the north side,” Levy-Pounds said. “She mentioned that the cars of her friends are broken into and their radios are stolen, but somehow their music is left behind, and said “different music tastes, I guess.”

“Many of us took that to imply that she perceives that African-Americans are breaking into cars in North Minneapolis,” Levy-Pounds continued. “And not stealing music because they listen to hip hop or some other genre than her white friends. Basically we were upset by the comments she made and it seemed uncalled for.” 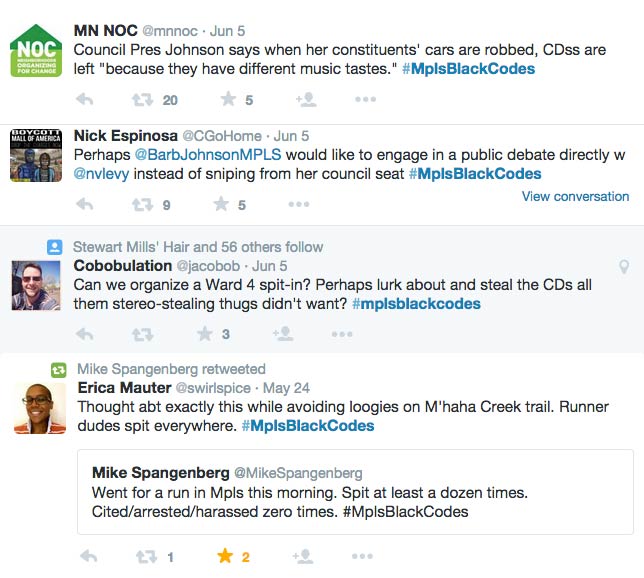 Is It Irresponsible to Compare Minneapolis and Baltimore? 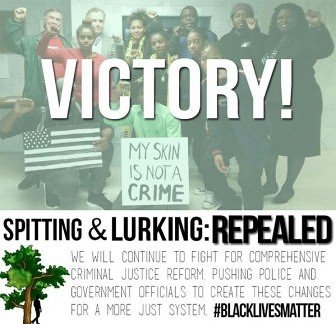 Council President Johnson wrapped up her statement with what one onlooker said (via Twitter) was “sniping” at Levy-Pounds and her recent Star Tribune column comparing racial inequality in Minneapolis to similar gaps in Ferguson, Missouri and Baltimore, Maryland.

According to Levy-Pounds, Johnson’s comments were disappointing.

“I felt that she made comments that were in reference to me in particular,” Levy-Pounds told me this week. “Without using my name, she referenced that she’d seen statements in the media about how we could become the next Ferguson or Baltimore, and she felt those statements were irresponsible.”

For the last few years, Minneapolis and the Twin Cities have been cited as having some of the largest racial disparities in the United States. For example, a recent report from the ACLU focused on the disproportionate impact “low-level crime” policing has on communities of color in Minneapolis.

“I have written about my concerns that we could become the next Baltimore, if we don’t address matters of police brutality and misconduct, and address the economic injustices that we’ve seen happening in communities of color, because those are the ingredients that we’ve seen all round the country,” Nekima Levy-Pounds told me this week. 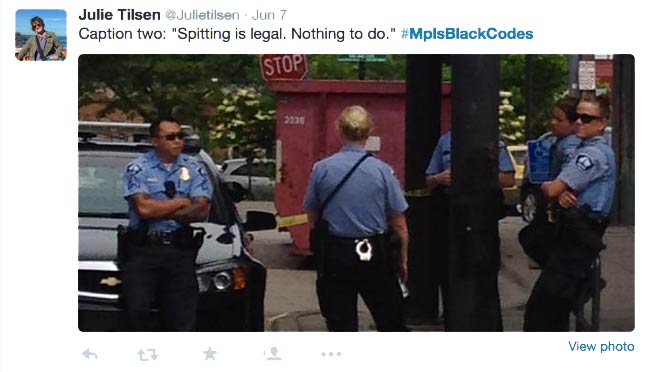 While the #blacklivesmatter movement has gotten a lot of attention for protesting systematic police brutality, they have focused on economic gaps in opportunity. For example, the “15now” campaign is calling for a $15/hour minimum wage in Minneapolis, and other cities around the country.

According to Levy-Pounds, comparing Minneapolis to Baltimore is not irresponsible. On the contrary, it’s necessary.

“The real irresponsibility is seeing these racial disparities and arrest rates, seeing this income inequality, and failing to lift a finger to prevent what could become a crisis,” Levy-Pounds said. 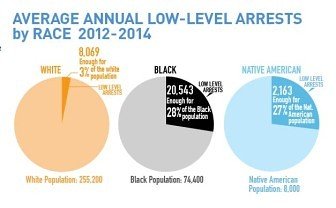 from the ACLU study.

Low-level crimes: The Next Frontier

I’m just going to point out that this is clearly step one, and I’m curious about what other ordinances people want to dismantle. I’m reading in the press that there are other ideas, and I think the public would like to know what people are proposing. When we go down this path, what’ the next step? Is it disorderly conduct? Is it curfew?

I hope that if we do do these things, that are perhaps a more common charge, or arrests made in this city, that we involve more people than this. We have 380 thousand people that live in this city, so I want to hear their voices too. And we will. We will.

As the ACLU report, entitled “Picking up The Pieces: A Minneapolis Case Study”, clearly shows, lurking and spitting are not the only crimes that unequally impact people of color.