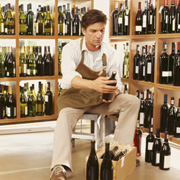 As we clear the table from one holiday feast and prepare for New Year’s celebrations, let’s offer another salute to the successful working relationship between Minnesota scientists and local entrepreneurs.

One vivid example comes from Papa George’s food products, based in Stillwater, which has recently expanded from serving lower-fat sausage products and ethnic foods for the Upper Midwest to an international food exporter.

Local vineyard operators and wineries that have taken Minnesota-bred grape varieties and are creating an exciting cold-climate wine industry for Northern states and adjacent provinces of Canada provide another example.

These goals took more effort than simply playing in the kitchen with herbs and spices. He worked with food scientists from the Agricultural Utilization and Research Institute (AURI) at its laboratories at Southwest Minnesota State University at Marshall to experiment and develop the products.

What this collaboration achieved was sausage that is 55 percent lower in fat than most regular pork sausage, with no preservatives, no MSG and no fillers. That still won’t win glowing endorsements from heart healthy organizations, but it does have great appeal to people who watch their diets and moderate fat intake.

Now starting his third decade as a Minnesota and Wisconsin sausage maker, Ghanem was still giving in-store demonstrations and visiting with customers at a Cub Foods supermarket in Maplewood this past week.

Ghanem is experimenting with new products. However, his biggest new development is exporting Papa George’s sausage to Panama, a long reach from the Upper Midwest, where Minnesota-based wholesaler Supervalu Inc helps distribute his product to many stores.

In the coming year, Minnesota science and entrepreneurship will also demonstrate its long reach, as Coyote Moon Vineyards at Clayton, in western New York becomes among the first U.S. wineries to have enough grape production to offer Frontenac Blanc wines. These are a mutated variation from the Frontenac red grape University of Minnesota breeders released in 1996.

Following a path similar to the evolution of the French Pinot Noir grape, University grape breeding horticulturalists released a Frontenac Gris variation for making white wine in 2003. Within the past few years, Minnesota and Canadian vineyard operators began noticing strains of the Frontenac Gris changing from gray to white, with the latter, a Frontenac Blanc, soon to reach regular consumer marketing channels.

“We’ll start bottling in a couple of weeks,” said Tony Randazzo, a member of the family that owns and operates the Finger Lakes-region winery in New York. But so far, he said, “the only word to describe what we’ve tasted is ‘fantastic!’”

That the New York winery will be among the first – with a few Minnesota and Canadian wineries – to offer Frontenac Blanc in the coming year is partly a coincident. “My dad (Phil) was at the right meeting, at the right time, standing next to the right person,” Randazzo said. “That’s how we got the seedlings.”

The rest isn’t coincidence. Coyote Moon works as a test plot for grape breeders at Cornell University, which is the land grant research institution for New York. Cornell, in turn, is a collaboration partner with University of Minnesota horticulturalists and plant breeders in developing cold hardy and disease resistant grapes for Northern climates.

It’s also not a coincident that cold but hardy Minnesotans are at the forefront in developing grapes and wines. The late Tom Martell of nearby Somerset, Wis., a past president of the Minnesota Grape Growers Association, offers a valuable timeline showing how entrepreneurs, scientists and the public sector worked together to make this Minnesota industry grow.

It retraces how the grape growers formed as an organization in 1976, and how they worked with Elmer Swenson, the region’s most important grape breeder who brought or helped bring about a dozen truly cold hardy or partially cold hardy grapes into production. It further notes the Minnesota Legislature provided special grape and wine research appropriations from the mid-1980s through the early 2000s to support and help build this industry.

Beyond tastes and quality of life issues, this is what public investment in research built: The first modern Minnesota winery – Alexis Bailly at Hastings – opened in 1978. Now there are more than 40 wineries in Minnesota and a few more soon to open, creating jobs, generating more than $11 million annually in direct economic activity, and supports millions more for Minnesota’s tourism industry.