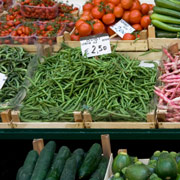 There is general excitement in the Red Wing area about the startup of the Riverbend Market Co-op, which has been a carefully developed community food system linking consumers with producers. As part of that excitement, and about as nonpartisan as anything can get in an election year, organizers of Riverbend advanced a resolution through at least one precinct caucus that merits attention by both major political parties statewide.

Clarence Bischoff, president of Riverbend and a farmer in Goodhue County (Vasa Gardens Farm), shares the following resolution that was passed a week ago at the Vasa Township DFL precinct caucus:

“Be it resolved that the State of Minnesota form a Local Foods Council to provide a vehicle for networking, communication, research related to the Minnesota food system, and reporting recommendations to improve the food system in Minnesota, specifically security issues and local-sustainable food production.”

Pretty simply and straight forward. But it can be complex as people around Red Wing, Duluth, Minneosta River towns and Minnesota college towns have discovered as they build local food systems. A helpful way of overcoming initital problems is sharing information.