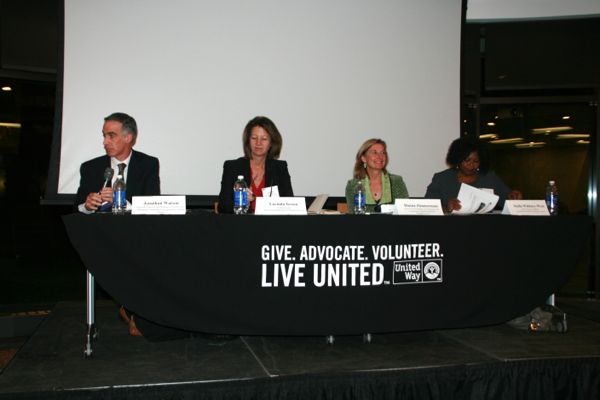 CORRECTED 12/11/2012: Minnesota may have a head start when it comes to putting the Patient Protection and Affordable Care Act(ACA) into practice, according to a panel of experts speaking at a forum sponsored by Greater Twin Cities United Way and held at the Amherst H. Wilder Foundation in St. Paul.

But, they admit, there are still a lot of questions to answer about the program, created in 2010. that has become known as Obamacare. The chief among these is how social services and health care agencies can provide the best health care for the least expense for the thousands of newly insured Minnesotans who are expected to sign on to the new system during the next two years.

Currently, there are about 485,000 Minnesotans without any kind of health insurance, according to the Minnesota Association of Community Health Programs. The number is expected to drop to 210,000 when the ACA takes full effect beginning next year. During the coming session, the Minnesota legislature will have to find ways to apply the new programs, making up the rules and regulations that, the experts hope, will result in a trouble-free transition. But, they admit, it probably won’t be easy.

“First we need to implement a Minnesota health insurance exchange and the legislature is going to have to figure out how we’ll do that,” said Lucinda Jesson, Commissioner of the Minnesota Department of Human Services.. “Second, we’re going to get people signed up for Medicaid expansion. We need to make it easier and more streamlined.”

The Minnesota Health Care Reform Task Force, of which Jesson is a member, came up with a narrowed-down 31-point list of their best suggestions, most of which centered on ways to make signing up and staying in programs easy for those who need it while increasing the quality of care and keeping costs down.

““We’re looking closely at the cost issue – we’re talking about the total cost of care,” said Jesson. “We need to redesign the delivery system to get more health for our dollar. If we don’t get costs under control, it’ll all be unsustainable. We have to start planning for this now.”

One of the task force’s suggestions includes hiring and training what are being called ‘exchange navigators,’ who will know the system and be able to help eligible people find the right programs. Another recommendation is to remove regulatory barriers and allow nurses and other health care workers to function at the highest point of their training. This would free up doctors to do needed specialized care and to focus on outcome based medicine instead of charging for unneeded tests and procedures.

An integrated care model, combining health care with programs for the sick with those designed to help people stay health will keep costs down, said Stella Whitney-West CEO of NorthPoint Health and Wellness Center in North Minneapolis. The Center has already started working on programs to do just that.

“North Minneapolis shows up with the highest percentage of smoking, childhood obesity, diabetes and the uninsured in the area. We’ve been having community events. Last summer, 700 people showed up for a family friendly event. We had jump rope, hip-hop dancercise and hopscotch along with health education. We need to address the social determinants of health and improve health equity.”

Technology also plays an important part of the mix. Hospitals, clinics and doctor’s offices use different systems to track patients and communicate with providers, insurance companies and government agencies.  Many can’t talk to each other. A switch to an integrated system is expensive but would save money in the long run. Many small clinics, both rural and urban, can’t afford the new software and computer systems needed and are looking to programs, like the SIM Grant, which have funds that could be used improve heath care technology across Minnesota.

Computers could also give patients greater control of their own care, said Whitney-West.

“Patients often do not have the expertise to use computers. We need to teach patients how to use computer software to monitor their own health care. We need to have someone at the clinic take them to computers and sit them down and show them how to access information.”

For more information on how various states are working to help implement the new health care bill, go to this website.

CORRECTION 12/11/2012: The forum was sponsored by Greater Twin Cities United Way and held at the Amherst H. Wilder Foundation in St. Paul.