Every Minnesotan will be required to have some form of health care insurance beginning Jan. 1, 2014, as a result of the federal Patient Protection and Affordable Care Act passed in 2010. States can operate their own health care exchange, or defer to a national exchange run by the federal government.

Some states began designing their own health care exchanges. Others chose to sue, claiming the reforms were unconstitutional, but the U.S. Supreme Court upheld the constitutionality of most of the federal health care reforms.

Minnesota DFLers decided they wanted to operate a state-run health exchange, but proposed legislation was stymied last year by state Republicans, who hoped the federal law would be repealed after the 2012 elections. When President Barack Obama was re-elected and Democrats won the state majority, Minnesota legislators put together a bill detailing what a state health care exchange would look like. HF5 is that bill.

Rep. Joe Atkins (DFL-Inver Grove Heights), who served on the health exchange task force, sponsors the bill, which cleared its eighth and final committee stop when the House Ways and Means Committee approved it as amended Tuesday. It is scheduled to be debated on the House floor March 4, according to Atkins. Sen. Tony Lourey (DFL-Kerrick) sponsors the Senate companion, SF1, which awaits action by the full Senate.

If Minnesota is to operate its own health exchange, the authorizing legislation must become state law by March 31. The Legislature is scheduled to be on break between March 25 and April 1, so time is running out.

Under the plan, insurance providers would have from April until October to design their marketplace offerings and get them approved by the Commerce Department. Plans would then be uploaded to a Minnesota Insurance Marketplace website. Providers of the selected plans would begin enrolling consumers Oct. 1, 2013, with the help of community navigators and brokers.

Who would use the marketplace?

One in every five residents is anticipated to obtain health insurance through the state health care exchange, including an estimated 300,000 uninsured people. A new law also expands Medical Assistance coverage to more low-income individuals, who could buy coverage in the exchange after an “apples to apples” plan comparison. Many could also qualify for federal tax credits only available through the health exchange.

Small businesses with 50 or fewer employees also could shop for plans on the exchange website. Businesses with more than 50 employees or companies that provide employee coverage by self-insuring them would not purchase insurance through the health exchange.

Enrollees would pay premiums and, depending upon their income, they may be eligible for federal tax credits.

As the bill moved through the committee process, several amendments were added that helped the bill become better, Atkins said. A bipartisan subcommittee worked on data privacy issues, but there are other sticking points likely to cause House floor debate.

How would the marketplace operate?

A new state agency within the executive branch would operate the health care marketplace, rather than the Commerce Department, which currently regulates insurance-related programs. A seven-member board of directors would be appointed by the governor.

Some lawmakers said that doesn’t go far enough, while others said health care experts are needed at the helm, but should recuse themselves when necessary.

Others said the board would have overreaching authority. Once the Commerce Department certifies that an insurance plan meets the requirements to be sold in the exchange, the board could select which of those plans, and how many, to allow in the exchange — a process called active selector model.

“You could qualify and not be approved to sell. It’s a critical flaw in the bill,” Rep. Kurt Zellers (R-Maple Grove) said.

“You also have to realize that … there are different tiers that consumers will have so we imagine there will be a number of products in each of the tiers,” said AARP lobbyist Mary Jo George. “We think if they have too much choice it actually is really no choice at all because they can’t make decisions very effectively.”

So, in Tuesday’s House Ways and Means Committee, an amendment was adopted that changed the way insurance plans would be chosen. In 2014, there would be no active selector model and all plans that meet federal and state criteria would be loaded into the exchange. Then in 2015, providers who want to participate in the exchange would be allowed to sell two plans, of which one must be the most popular plan for each of the four tiers. If they desire to have more than two plans, the additional plans would go through the board’s active selection process. 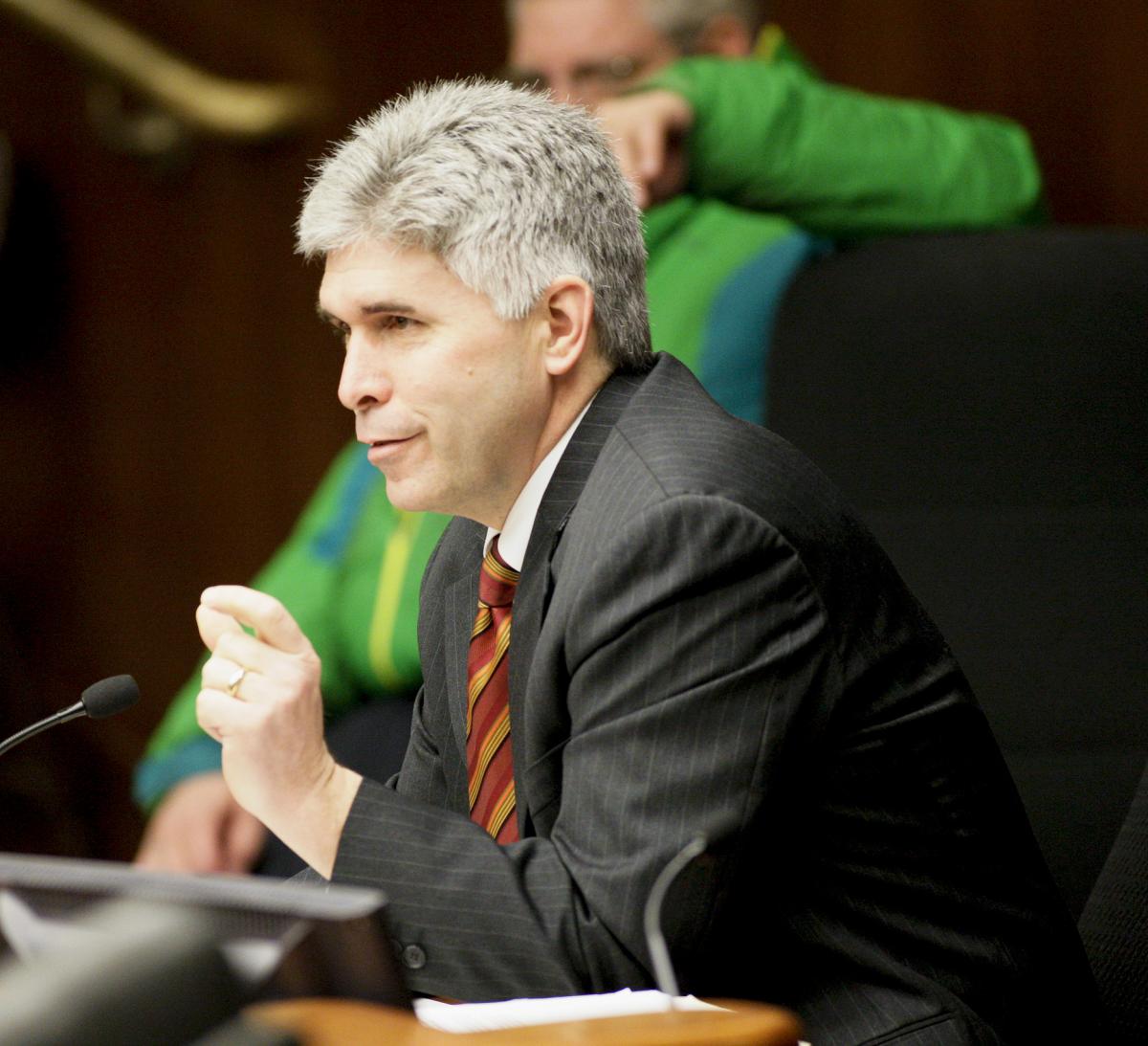 “I think this is a step in the right direction,” said Rep. Greg Davids (R-Preston). “It doesn’t get us where I’d like to be, but I think we’re making some progress here.”

When introduced, the bill gave the board broad authority to make rules quickly and forego the usual public hearing process. Atkins (pictured at right) said expedited rulemaking is necessary during the first year to launch the health exchange in time. Ongoing, the board would need the authority to quickly react to changes in the insurance market if it is to stay competitive, he said. Members understood the need for expedited rules during the first year, but amended the bill so there would be a 60-day rulemaking process with public transparency. The Senate bill would require a 21-day period.

The health exchange would create about 85 full-time equivalent jobs when it’s fully implemented, according to a House fiscal projection. An estimated eight senior managers would earn between $86,000 and $108,000 per year. In addition, there would be support staff, business operations analysts and officers, information technology administrators, marketing and communications staff and a broker/navigator licensing division.

The state received federal grants to get the insurance marketplace up and running.

Under the Senate bill, beginning in 2014 a portion of the Health Impact Fund, a 75-cent fee paid for each pack of cigarettes sold , would cover operating costs to manage the exchange. The House proposes funding it by withholding a portion of premiums paid by those who purchase insurance through the exchange.

If the House and Senate pass differing bills, they would likely meet in a conference committee to iron out the differences before the bill goes to the governor.

Under the House plan, the state would collect 3.5 percent from the premiums sold initially through the exchange. Depending upon enrollment numbers, that fee would be reduced in future years to around 2.5 percent or lower, according to projections.

The estimated annual operating cost of a new Minnesota Insurance Marketplace agency and board is $52 million to $60 million. Davids said that’s a lot of money for a website “portal,” but Rep. Bob Barrett (R-Lindstrom) said he doesn’t think the money collected will be large enough to cover the state’s financial risks.

Enrollment projections were compiled by Jon Gruber, a health economist, and Bela Gorman, a health actuary. Gruber and Gorman created budget estimates based on low, medium and high participation in the health exchange. House members have been pouring over the 47 pages of fiscal implications.

Individuals may see a savings by purchasing through the competitive online marketplace, Atkins said. But some won’t save a dime and may, in fact, wind up paying more for health insurance, according to Kathryn Kmit, Minnesota Council of Health Plans director of policy and government affairs. But Atkins said expected higher costs are due to the federal reforms, not due to the state health exchange.

“I have no doubt that (the federal laws) will increase costs when you can’t turn folks away and you gotta take all risks and you have to take everybody that comes. So, I’m not arguing with that at all,” Atkins said. “But, to the extent that we’ve got a good vibrant marketplace where folks have to compete for my business, that piece of it brings (the cost) down,” he added.

Small businesses hope to gain from the exchange because they would no longer pay into the Minnesota Comprehensive Health Association, which provides insurance for high-risk individuals who have been denied coverage from private plans. Because federal law will prohibit denying coverage due to pre-existing conditions, the need for MCHA goes away and the program will be phased out.

“…We feel as though we’ve been penalized just for being a small business,” Todd Mikkelson, president of a small export business, wrote in prepared testimony. “We’re very excited for the changes being made.”

To date, 18 states are moving toward conditional federal certification to operate their own health exchange; 10 have passed their state’s legislation. Additional benchmarks must be met after legislation is passed, according to Minnesota Insurance Marketplace Director April Todd-Malmlov. For example, rules are due in April regarding the organizations that will assist consumers in purchasing insurance through the exchange and technology improvements will need to be in place prior to opening day, Oct. 1, 2013.