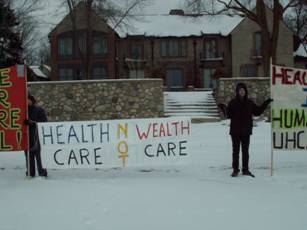 For some, it is simply wrong to profit off the illnesses of others.

Feeling ignored by senators and representatives that appear to listen only to lobbyists, a group of Minnesotans took their displeasure directly to the CEO of one of the nation’s largest health insurance companies on Saturday.

We don’t need insurance profiteers between us and our health care,” said activist and co-organizer Roger Cuthbertson, after planting a banner in the snow in front of the $6.6 million Lake Minnetonka mansion owned by UnitedHealth Group CEO Stephen Hemsley.

Elizabeth Frost, MD, and co-chair of the Minnesota Chapter of Physicians for a National Health Program (PNHP), joined the protest. “The reason we don’t have good health care is that our health care has been hijacked by the for-profit insurance industry and the for-profit pharmaceutical industry,” she said.

“We need to end this dichotomy between need and greed,” said Joel Albers, a pharmacist and organizer with the United Health Care Action Network.

“Because Hemsley loves lobbying so much we decided that we should lobby him,” said Bjorn Johnson, one of the protesters.

According to Consumer Watchdog, Hemsley had taken the unseemly step of telling all of his employees to use company time and resources writing letters to the editor and pressuring legislators to support mandated insurance, with penalties, and no public option.

“Today the Senate health care bill is looking very much like the system that Hemsley’s company was lobbying for,” said Johnson.

Steadily growing premiums have created many wealthy insurance executives. In fact, Hemsley barely made the Top 10 list of the highest paid insurance company CEOs of 2008, as compiled by FierceHealthcare.