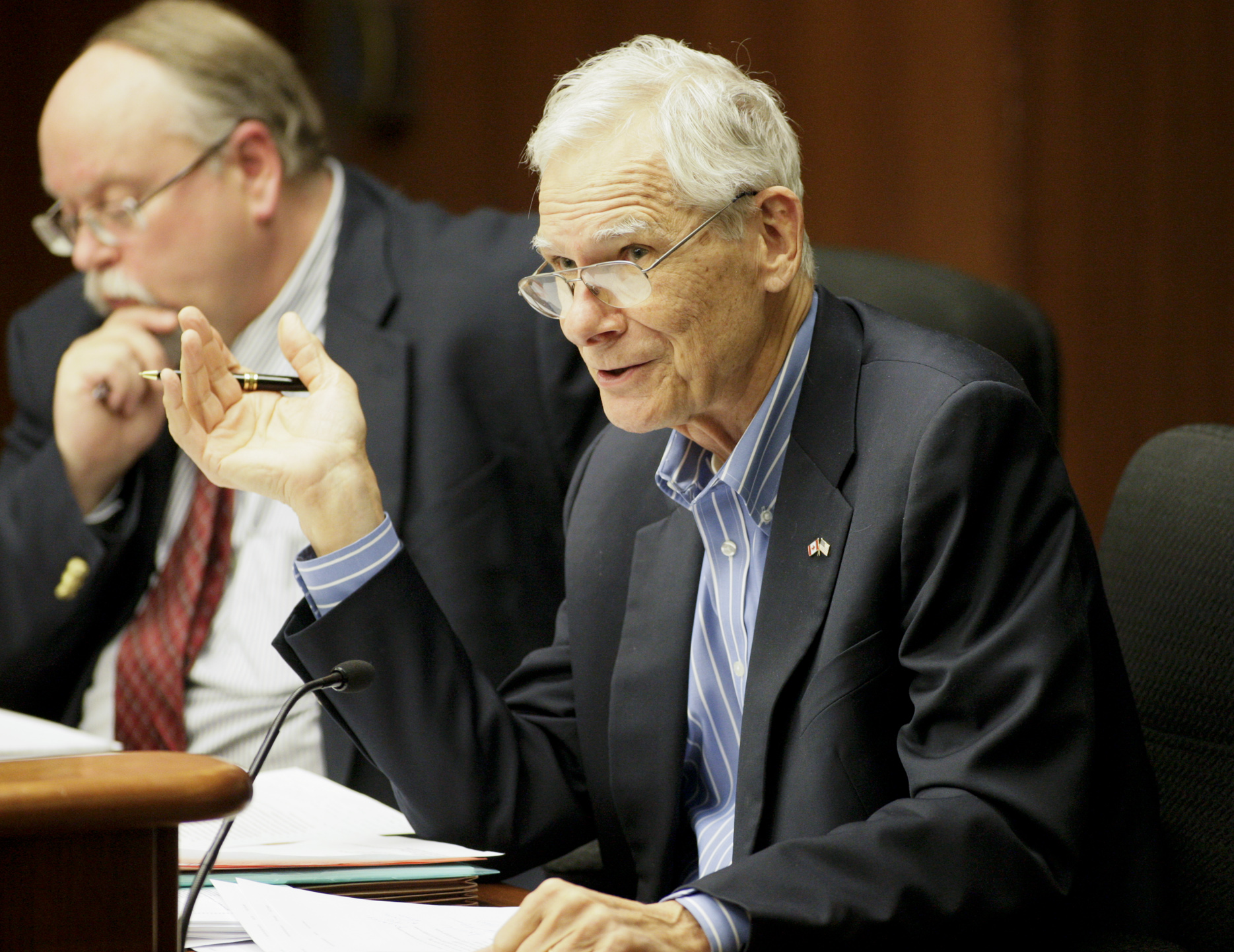 But after receiving a General Fund budget target that was $320 million less than the governor’s, Rep. Thomas Huntley (DFL-Duluth), committee chair, began surgically carving the block of health care initiatives while incorporating some of the House’s priorities. Health and human services was the only budget target that required $150 million in General Fund cuts.

The $11.5 billion omnibus health and human services finance bill would appropriate funding for a plethora of public programs, such as those that address the needs of infants and children, the mentally ill and individuals on Medical Assistance.

The bill would begin aligning state laws to new federal health care regulations and make changes to the MinnesotaCare program, the state’s version of basic health care insurance for low income residents who don’t qualify for Medicaid or Medicare. Most notably, the $10,000 annual limit on hospitalization for MinnesotaCare enrollees would be lifted.

Federal authority to operate MinnesotaCare is expiring, and it will be at least another year before a basic health care benefit plan can take its place, so the bill attempts to bridge that gap by directing health care access funds be used to provide benefits for those who earn up to 275 percent of the federal poverty level.

At the forefront of the public policy debate are about 60,000 day care centers and 90,000 home-based child care providers, many of whom seek liability protection from parents who would prefer an alternative sleep position for their child, other than the safe sleep practice of placing infants on their backs to sleep.

A sharp increase in the number of sleeping infants who died while in child care led to an investigation and a public safety campaign ensued, resulting in a drop in deaths. Now a consortium of child care providers and DHS are seeking legislation directing that infants be placed only on their backs to sleep, with nothing but a pacifier in the crib. Parents would need a physician’s note allowing the child care provider to lay the baby down on the stomach or side.

No blankets or pillows are recommended, which would affect those who engage in swaddling — wrapping an infant tightly in a blanket simulating a womb environment — an infant in order to calm the baby. The Department of Human Services has taken the position that swaddling should be prohibited, according to Jerry Kerber, the department’s inspector general. Swaddling can result in overheating or hip dysplasia, he said. Infants who kick a blanket free can suffocate if the blanket covers their face or if they roll over.

But day care providers said there are sleep sacks designed specifically for calming a baby that alleviate the fear of suffocation. The sleep sack only covers the torso area. They also argued that swaddling an infant is a preferred method of calming a baby among some cultures.

An amendment adopted by the House Ways and Means Committee on Wednesday would prohibit care providers from placing a swaddled baby, who has begun to roll over, down to sleep. However, with the written consent of a parent or guardian, the provider could place an infant who does not yet roll over down to sleep in a one-piece sleeper, referred to as a sleep sack.

When a provider is determined to have violated safe sleep rules, DHS would not be required to show that an infant died or was injured as a result of the violation and could issue a temporary immediate license suspension, under the adopted amendment.

Two other child services provisions incorporated into the bill include:

Nursing home and personal care attendants in home- and community-based settings were the targets of pay cuts in order to help balance the state budget during the last biennium. Huntley included a 2 percent pay increase for providers of waiver-based services. A pending 1.67 percent decrease would be repealed. 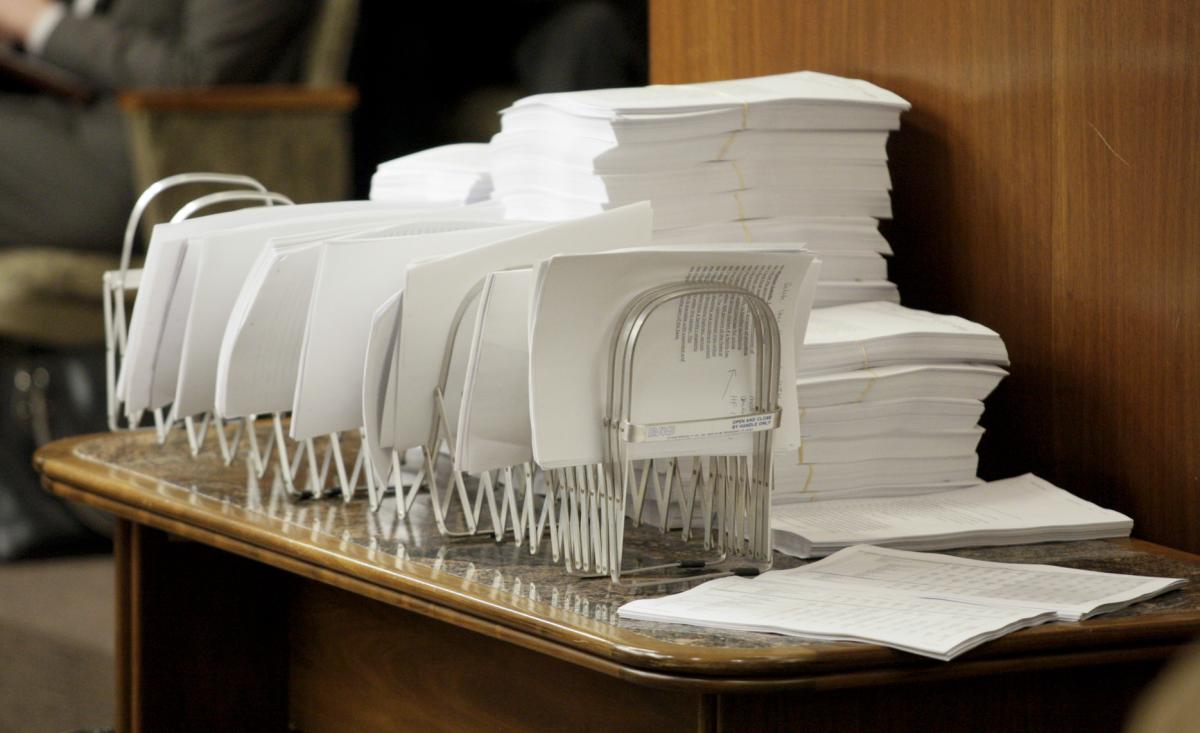 Left: Piles of materials sit on the committee table during debate on the omnibus health and human services finance bill during the House Ways and Means Committee April 17. (Photo by Paul Battaglia)

“We’ve cut the long-term care providers and nursing homes for so long that they’re having huge turnover of their staff and that affects the quality of care that people get,” Huntley said.

The rate increases would be funded by redirecting funds that would otherwise be proposed increases to the community service and development grant programs, which help provide capital improvements for long-term health care programs.

“It’s a worthy way to spend the money. I don’t know if it’s a good place to get it. This is capital funding so you can improve a day service or assisted living …,” Rep. Jim Abeler (R-Anoka) said.

The bill also seeks to protect vulnerable adults in their care by modifying the way maltreatment cases are reported. Electronic reports would be filed by counties using a common entry point through a Web-based reporting system beginning July 1, 2014.

Several ongoing health care reform measures are also reflected in the bill. As the state moves people out of institutional facilities and toward lower cost community-based services for the elderly and disabled, HF1233 would require a study to determine what the capacity is in local communities for serving older adults and people with disabilities or mental illnesses in community-based settings. The study, which would be due by Aug. 12, 2015, would include strategies to increase home and community-based services in regions with critical access needs.

Some older adults would fall into a new classification of services called individual community living support. Case managers or care coordinators would develop individual ICLS plans with the client.

Mental health initiatives would include requiring certain home- and community-based service recipients to consult with a mental health professional or a behavioral professional within 30 days of discharge from treatment programs. The goal would be to reduce or avoid emergency room visits, psychiatric hospitalizations and commitments to institutions due to crises episodes.

Some proposals were still being considered for inclusion in the omnibus bill, but required further hearings in the House. They could potentially be amended into the bill on the House floor.

One such bill is HF1780, which contains data practice provisions, background studies and other civil issues related to health care. On Tuesday, the House Civil Law Committee laid the bill over for further discussion. Sponsored by Huntley, it has no Senate companion, but some of the language appears in SF1034, the Senate companion to HF1233. Sen. Tony Lourey (DFL-Kerrick) is the Senate sponsor.

SF1034 also contains increased services for children with autism. Rep. Kim Norton (DFL-Rochester) carries a similar bill in the House which she continues to work on with parents and health care providers. It has been controversial because it would require private health insurance providers regulated by the state to include autism spectrum disorder coverage in their policies, including Applied Behavior Analysis therapy.

Norton also tried to amend an amendment that was added to HF1780 in the House Civil Law Committee on April 16. It would have protected anonymous private donors for the proposed Destination Medical Center from open meeting and data practice laws. “If it could get it out of this committee, I can commit to trying to find some better language to put in while it’s in the tax committee and it gives us a couple more days.

Several members objected to the amendment, which was later withdrawn by Rep. John Lesch (DFL-St. Paul), the committee chairman.

Article 15 of the omnibus bill is a list of contingency programs that would only be funded if a federal waiver is approved.