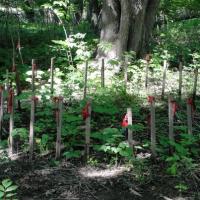 Following the Dakota – U.S. War of 1862, approximately 1,700 Dakota people – women, children and elders, were set on a 150 mile forced march to imprisonment near the site of Fort Snelling. They were assaulted en route and held in brutal conditions through the winter. Hundreds died.

This kind of inhumane treatment would be an international scandal today. Instead, it’s an overlooked episode in Minnesota history.

On Tuesday, November 13, 2012, there will be a ceremony to remember the walk and non-Dakota people are invited to participate. Tom Duke and Jim Bear Jacobs are involved with the St. Paul Interfaith Network and a project called Healing Minnesota Stories. They talked about it with KFAI’s Siobhan Keirans and Dale Connelly.

You can also get information about the commemorative march on Facebook, and at the St. Paul Interfaith Network. [Audio below]