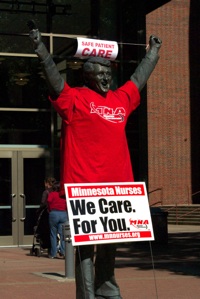 Nurses in the metro area will vote May 19 on whether to authorize a strike when their contract expires on May 31. After months of negotiations, the nurses and healthcare executives from Twin Cities hospitals seem to have reached an impasse. Now they are taking their cases to the public.

The Star Tribune published two versions of the broken-down negotiations. The two commentaries present diametrically different stories of the broken-down negotiations between 12,000 nurses and the six major metro-area hospital corporations. The nurses talk about quality of care and patient safety. The hospitals talk about the need to cut costs and say that nurses earn a lot of money.

The nurses say: The math doesn’t lie: The thinner that nurses are spread in hospitals, the greater number of patients who die.

The healthcare executives say: Clear evidence shows that when you need care, Twin Cities hospitals are among the best.

They can both be right here. The real question is how thin the nurses will be spread under the hospital proposal, and what impact that will have on patient care. The hospitals are demanding “flexibility” to move nurses from one unit to another, in order to maintain staffing levels but not over-staff anywhere. Nurses reply that moving someone from an oncology unit to surgery or from pediatrics to emergency room will make patient care worse.

How much worse? That’s hard to predict, but it’s clear that the hospital plan is about the bottom line, not patient care.

Nurses have plenty of stories of danger to patients when their patient load is too high, but can’t put names on the stories because of patient confidentiality. Hospitals say that they think patient care is just fine and they can’t respond to concerns about understaffing unless they have specific stories to investigate.

The healthcare executives say: The average salary of a full-time hospital nurse in the Twin Cities is more than $79,000 (the national average is $65,000).

The nurses say: According to the Twin Cities hospitals’ own financial data, the average Twin Cities nurse makes $62,574 in yearly wages.

The U.S. Bureau of Labor Statistics says the mean (average) salary of RNs working full time in hospitals in Minneapolis/St. Paul/Bloomington is $75,020. The median wage is $74,030. (Median means that half the nurses make more and half make less than this amount.)

The health care execs claim that nurses are demanding a “significant pay increase,” but don’t say how much that is, or how long it has been since the last “significant” increase.

The nurses say: The six “nonprofit” Twin Cities hospital systems currently bargaining with us made an estimated $700 million in profits during the 2009 recession. Some of their CEOs gave themselves 20 percent or even 30 percent raises during that time. Most of them make well more than a million dollars a year.

Our pension benefit, established in 1962, makes up approximately 1.14 percent of the hospitals’ $7 billion in annual revenue. The hospitals are asking to cut it by a third, pushing our pension back to 1968 levels.

The healthcare executives say: Today, nurses are drawing salaries well above Minnesota’s typical worker and still have a generous pension that is out of line with 90 percent of other professions.

Pension benefits are hard to pin down. Pensions vary, depending on length of employment, age at retirement, earnings during employment, and other factors.

The nurses cite high executive salaries, but they also give numbers that show the hospitals could pay the pension costs out of their profits.

The healthcare executives are not talking about the actual cost of the pensions. Instead, they say the nurses’ pension plan is too generous (“out of line”), and that nurses make more money than the “typical” Minnesota worker. Of course, it would be hard to identify a professional who makes less than a “typical” worker, and even harder to explain why there is a problem with years of training resulting in higher salaries.

Money is key in all of today’s health care debates, from Congress to the Minnesota Legislature to the nurses’ contract negotiations. The difficult lies in deciding what it means, and what weight it should carry.

Which factors are relevant, how are the relevant, and where can we find reliable information on:

Quick facts:
• Nurses vote May 19 on the hospitals’ final offer.
• Today’s vote involves 12,000 nurses in the metro area
• The dispute involves 14 hospitals in six groups – Allina Hospitals, Fairview Health Services, Children’s Hospitals and Clinics of Minnesota, HealthEast Care System, North Memorial, and Park Nicollet Methodist Hospital. Neither HCMC nor Regions is affected – their nurses’ contracts are not up for renewal at this time.
• Their contract expires May 31.
• The MNA says a strike would not happen until after that date.
• In 1984, five-week strike involved 6,300 nurses at 16 hospitals in the Twin Cities.
• In 2001, nurses struck two Fairview hospitals.