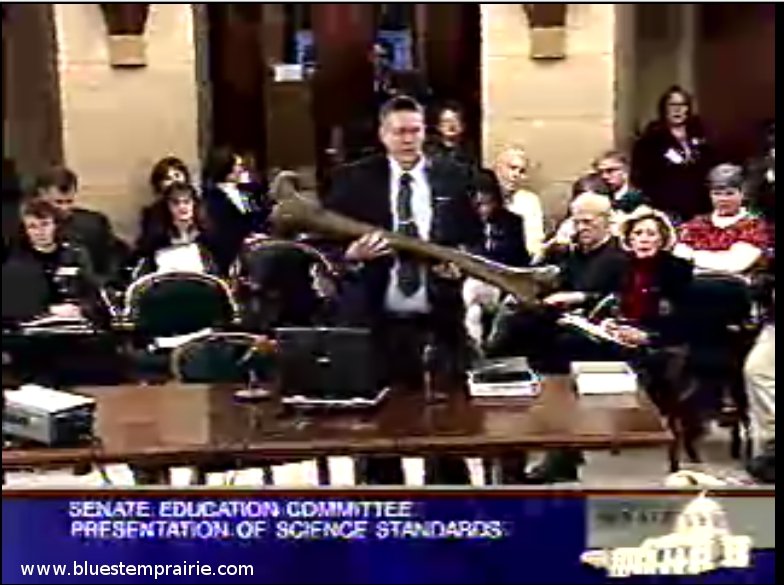 In a 2005 presentation at the Yampa Valley Baptist Church in Craig, Colorado, Minnesota House District 47A primary candidate Bob Frey argued against the theory of intelligent design as well as that of evolution.

Frey also repeated a creationist notion that the sun is shrinking, then attributed bad behavior in kids these days to teaching evolution in school.

Frey said this theory, referred to as “intelligent design,” asserts the idea that God created the world and creatures evolved. Frey said he doesn’t subscribe to the theory, and he urges Christians to fight to remove evolution from curriculums.

This position puts Frey on the more extreme edges of the public debate. As a contrast, endorsed Minnesota First Congressional District Republican congressional candidate Aaron Miller–who gained much attention from the national press over remarks he made about teaching evolution in schools–positions himself as a believer in intelligent design.

In the Colorado presentation, Frey also asserted that the sun was shrinking, a common claim from Young Earth creationists:

Frey said the sun is shrinking at a rate of five feet in diameter per hour. If scientific calculations are correct, the sun would have touched the earth 11 million years ago, he said. “That would have been pretty hard on the dinosaurs, don’t you think?” he said.

Not so, said Howard J. Van Hill, Professor of Physics and Astronomy at Calvin College in. Grand Rapids, Michigan. Writing from a Christian perspective, Van Hill explored the topic of The Legend of the Shrinking Sun- A Case Study Comparing Professional Scienceand “Creation Science” in Action. In his summary for the 1986 article, Van Hill wrote:

In recent years, advocates of the young earth hypothesis have assembled numerous lists of “scientific evidences” for their recent creation scenario. In this paper we critically evaluate the scientific adequacy of one such evidential claim of “creation-science,” viz., that the sun’s diameter has been shrinking in such a manner as to preclude the credibility of the standard multibillion-year chronology for terrestrial history. Within the professional scientific community, a preliminary report which suggested a long-term and rapid shrinkage of the sun presented a puzzle for solar astronomers. Consequently, additional studies were made and the credibility of the original data was re-evaluated. The result is that secular shrinkage has not beenPost Flare Loops on the Sun substantiated, but an 80-year oscillatory behavior was discovered. Within the “creation-science” community, however, the response to the original report has been remarkably different. The suggestion of rapid long-term shrinkage was uncritically accepted, the evidence and conclusions drawn from subsequent studies were generally dismissed, and extrapolations of the presumed rapid solar shrinkage have been performed without restraint. Isolated from the corrective of continuing professional investigation and evaluation, the “creation-science” community continues to employ this unwarranted extrapolation of a discredited report as a scientific evidence” for a young earth. The credibility of the Christian witness to a scientifically knowledgeable world is thereby clouded.

In short: uncritical cherry-picking of evidence by “creation science” believers makes all “Christian witness to a scientifically knowledgeable world” look bad. Heaven knows what freethinkers will say about Frey’s statement.

At the Baptist Church in Colorado, Frey repeated his claim that learning evolution in school today is what’s wrong with kids these days:

“Folks, this is a lie and we’re paying for it through tax dollars for our kids,” Frey said.

He said evolution in education has led to an increase in teen pregnancy, higher abortion rates and more teen suicides. He also said violent crime and divorces have skyrocketed and standardized test scores have dropped because evolution is taught in schools.

Without God, youths have no accountability and no one to answer to, he said.

Bluestem wonders how much Frey would attempt to promote these views–which are extreme within the broader Christian community–if elected. He’s already campaigned on his unfounded beliefs about Minnesota’s Safe Schools law and the nature of HIV.

The abortion rate in Minnesota is at a 30-year low and the teen pregnancy rate in the United States has declined 51 percent since its high-water mark in 1991. Teen suicides have increased, in part because of warnings about the use of anti-depressants.

Violent crime and divorce? Outside of prisons, the crime rate has declined. As for the divorce rate, it’s climbing again as the economy improves, but attributing it to a single cause is silly. However, at least Frey isn’t joining his friend Allen Quist in blaming food assistance for poor Americans.