Being a cheapskate at heart, I am always on the lookout for ways to save on dining out. I don’t like to use coupon deals like Groupon, because they seem like such a bad deal for the restaurants, which typically only get around 25 percent of the face value of the coupon. It feels especially tacky to use a coupon at a restaurant where I know the owner or the chef.

But there are other ways to save money on dining, and now that I am no longer dining on an expense account, I am becoming a bit of an expert on them: happy hours, cheap date nights, and movie nights. 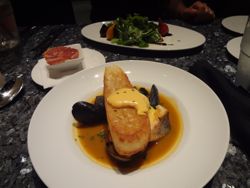 Most happy hours end a little too early for us — we rarely have dinner before 7 p.m., and nearly all happy hours end by then.  But Sea Change, Tim McKee’s sustainable seafood restaurant at the Guthrie Theater in downtown Minneapolis,  offers two happy hours: from 3 to 6 p.m., and again from 8 p.m. to closing (from 5 p.m. on Mondays), in the bar only. The menu offerings are pretty limited, but what they do offer is very good: fish tacos for $5, a bowl of bouillabaisse or a pot of mussels with frites for $6, a shrimp cocktail for $8. Portions are about half the size of a typical dinner entree, but it’s still pretty good value, and the quality is quite high. The bouillabaisse offered chunks of salmon, char and a few mussels in a traditional savory seafood broth. The mussels were poached in a typical white wine broth, accompanied by slice of grilled bread and a herb aioli. The limited happy hour drink selection includes a Muscadet (decent) and Chianti (haven’t tried it) for $6 a glass,  Jameson Irish whisky or Prairie vodka for $5, and Grain Belt Premium for $3.

I hadn’t dined at Chino Latino in Uptown in years, but I returned last night to try their happy hour menu. It’s served from 4:30 to 7 p.m. Tuesday through Sunday, but on Monday nights, it is offered all evening, in the bar area only; and in all areas of the restaurant on Sundays through Thursdays from 10 p.m. to midnight. Again, it’s a limited selection, but what we had was quite enjoyable: an open-faced quesadilla topped with chorizo, pepper Jack cheese, black beans, pico de gallo and a spicy jalapeno mayo ($4), a vegetarian fried rice topped with guacamole, a tuna roll ($5), some cod and shrimp croquettes ($1 apiece), and a couple of crab balls ($2 each). The cod and shrimp croquettes and the crab balls were nearly identical, with a dark deep-fried crunchy crust, and a soft and creamy mashed-potato and seafood filling. It’s everything you want bar food to be: cheap, filling, and tasty. You can wash this all down with a glass of the house red or white for $3, a tap beer for $4, or a variety of $5 cocktails and mixed drinks.

Lots of restaurants offer cheap date nights, and they are usually variations on the same basic theme: two entrees and a bottle of wine for around $32. At the Bryant Lake Bowl, it’s offered Mondays from 6 p.m. to midnight: Two entrées, a bottle of wine (or “a few beers”) and one round of bowling for $28 per couple. But my favorite so far is Tracy’s Saloon, which offers its cheap date on Friday nights from 5 p.m. to 1 a.m. For $29 you get a pitcher of beer or a bottle of wine, two starter salads, two entrees (limited but interesting selection), and a dessert to share. 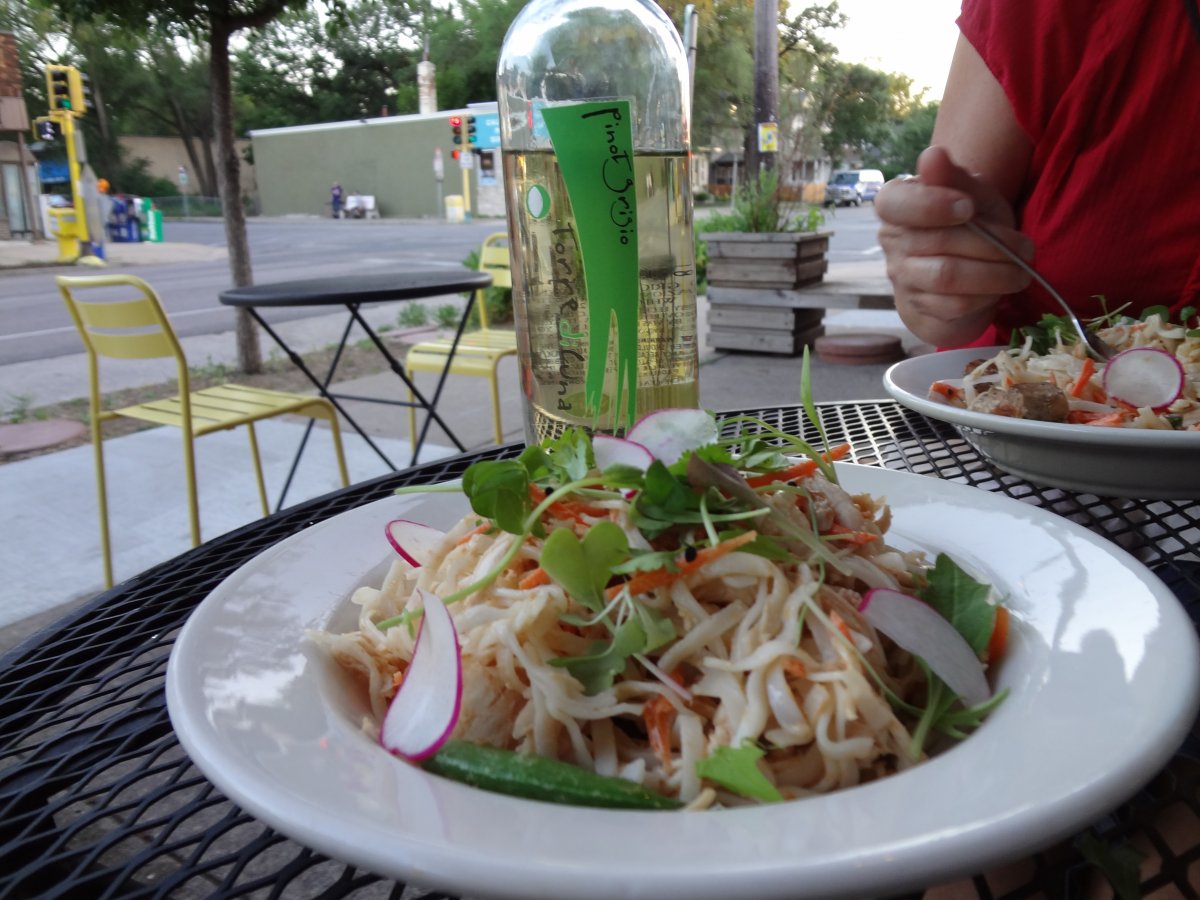 My newest discovery in this category is the Saturday night cheap date special at Gigi’s Cafe, 824 W. 36th St., (at Bryant Ave.), Minneapolis: salad (sometimes), two entrees, dessert and a bottle of wine for $28. The entree option change every week, and come in vegetarian and non-veg variations; on the night that we tried it, these were a Chinese noodle salad with choice of shredded chicken or fried marinated tofu, and a ginger orange cupcake for dessert. Neither of the noodle variations was very exciting, but the overall experience, sitting at a sidewalk table on a perfect summer day, was more than the sum of its parts.

I haven’t actually tried the Reel Deal at Mozza Mia in Edina, but I did dine there recently, and realized only later that we could have wrangled a couple of movie tickets out of the deal if we had thought ahead. The deal, available every day is, you get a pizza, a bottle of wine and two movie tickets, good anytime at the Edina Theater (right across the street) for $40.

You can even go to the movie first, and then have your pizza later, if you prefer, but you have to prepay for the tickets at Mozza Mia with a credit card. When you return to the restaurant after the show for dinner, the balance of the $40 will be charged to you card. You get your choice of a Summerfield Cabernet Sauvignon or Chardonnay — these aren’t on Mozza Mia’s regular wine list, but the person who answered the phone assured me that they were, “decent, good.”

The deal is good for any pizza on the menu. The highlight of our most recent visit to Mozza Mia was the Siciliana, an intensely flavorful thin-crusted pie topped with house-made smoked bufala mozzarella, grilled eggplant, roasted garlic and oregano ($15). The gelato of the day was actually a spumoni, three different flavors, topped with preserved Italian cherries ($6). Mozza Mia does offer a happy hour, too, Monday to Friday from 3 to 6 p.m. but I haven’t tried it yet – you can check the details here.