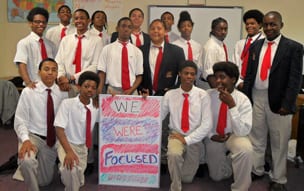 In 1992, the founders of Seed Academy & Harvest Preparatory School expanded a home childcare business to a kindergarten-to-first-grade elementary school. They now serve close to 1,000 students — and they assert that they have solved the puzzle of the achievement gap for their student body of predominately children of African descent.

When Eric and Dr. Ella Mahmoud met at the University of Wisconsin in their late teens, he working on a degree in engineering and she on a degree in journalism, Ella already had dreams of starting a school.

Upon graduation in 1983, she began a childcare business in their South Minneapolis home.

“Our home became an incubator for our school, starting with 10 children, and then every year our program would grow,” says Eric Mahmoud, now executive director of Harvest Preparatory School, during an MSR interview. Dr. Ella Mahmoud directs Seed Academy and oversees school-wide human resources.

The school’s five programs include:

A few years ago, Mahmoud began looking around the country for schools with successful academic outcomes working with a predominantly poor and/or African American student body. They began incorporating some of the strategies and built programs specific to their student population based on asking themselves five questions:

“So basically we built a system around those five questions that we call the gap-closing framework,” explains Mahmoud.

Last year’s results were not exactly what the Harvest staff expected. After a year of working very intensely with students, even though their efforts were praised in the Star Tribune for showing progress, the staff was confused and disappointed with their 43 percent proficiency rate, which was not the level of progress they had hoped for.

“What I said was, never will that happen again,” declares Mahmoud. “We’re going to know that we’re in trouble by September and October, not when we’re reading it in the paper a year later.”

Mahmoud showed what he called a dashboard, a colorful chart with data that tracks the results of students’ assessments. The color-coded data may mean nothing for those without an engineering degree, but the lay terms Mahmoud uses to explain them are plain and simple.

Last year, Harvest had seven terms lasting six weeks each, ending with students being given in-house comprehensive assessments. The dashboard is a snapshot of the results. The goal was for all students to function at 80 percent proficiency or higher.

There were two state-wide testing changes that worked in the school’s favor. The first is that the testing standards shifted, and schools that used mainly textbook instruction were unable to shift instruction to meet the new standards. As a result, many schools’ test scores went down.

Not Harvest. “The textbook doesn’t drive our instruction; the standards drive our instruction,” Mahmoud explains. “We’re constantly asking, ‘What do our children need to know, and what do they need to be able to do?’ So we ask that question in the beginning of the year.”

Secondly, though the state switched from a pencil-paper test to a computer test, schools had the option to choose between the two. The mechanics of switching between systems negatively impacted student performance. Harvest chose not to switch, believing as Mahmoud states, “You play the way you practice.”

Minnesota leads many other states in poor Black student performance when compared to White students, and the biggest difference between Minnesota and other school districts around the country is the state’s short school year. At 172 days, Minnesota has the shortest school year in the country. Harvest has a 200-day school year.

“If we were talking about football, if another team was spending 40 percent more time practicing, I would just assume that they are going to be better,” says Mahmoud.

‘The gap is closed’

Three years ago, 53 percent of Harvest Preparatory students were proficient in reading. Even then they were outperforming both Minneapolis and St. Paul School districts’ average. Since then, their reading percentages have increased by over 20 percentage points.

Sixty-one percent of Best Academy — which is comprised of the all-boys program, the S.I.S.T.E.R. Academy and the ELL program — beat the state average when ELL students are included. Harvest’s ELL population is at 33 percent proficiency in math. The state is at 27 percent. Looking at the ESL proficiency rate alone, Harvest’s East African students out-performed Minneapolis and St. Paul ESL students in reading.

“I have an affinity for the boys,” Mahmoud admits. “Because of all ethnic groups and genders, African Americans as you know, are at the bottom of performance measures… So I’m just really proud of the performance of our boys.”

“That’s powerful,” says Mahmoud. “That means the gap is closed.”

With the highest concentration of African American boys in the state, Mahmoud says, the only institution competing for higher enrollment of this population is the prison system. “They build prison cells based on the performance of third-grade math and reading scores. One hundred percent of our third grade boys were proficient in math. They’re not getting any of our boys.”

Harvest created its model from looking at high-performing schools across the country and tailoring their strategies to meet their students’ needs. After returning from several of those trips, Mahmoud began to realize that poor student performance was a reflection of administrators not doing their jobs.

Do other large, traditional school districts across Minnesota have the ability to produce a high-performing student body, regardless of race, ethnicity or native language?

“Yes, it definitely can be done; it’s being done all over the country,” Mahmoud says. A number of schools have already visited Harvest in hopes of finding their own answers. Last November, St. Paul Public Schools’ superintendent visited and is in the process of creating a school based on Harvest’s model. Several charter schools have visited as well.

However, Mahmoud says that a visit is just the initial step. One of Mahmoud’s visits was to Noble Street Charter Schools, the highest performing high school in Illinois that sits right next to the lowest performing high school in the state. Noble’s administrator says that the principal of the low-performing school visits every year and asks for Noble’s parent handbook and curriculum, which he willingly gives each year. Yet the school’s low performance remains intact.

Creating a successful high-performing school was something that began with changing Harvest’s teaching model. Harvest teachers work a minimum of 60 hours per week. Because they view teachers as the biggest component to achieving student success, they are always evaluating ways to enhance teachers’ skills, ensuring that they are supported and held accountable for outcomes.

“We don’t cry about parents not being supportive or students coming to school with their clothes dirty,” Mahmoud says. “We still have to teach them.”

However, Mahmoud doesn’t mean that there has to be an overhaul of school staff to achieve student success. Seeing other schools working with students that “looked like our children” initiated a change in mindset at Harvest.

Harvest Preparatory, as a public charter school, offers free and open enrollment to all students. They are located at 1300 Olson Memorial Highway in Minneapolis, and can be reached at 612-381-9743.