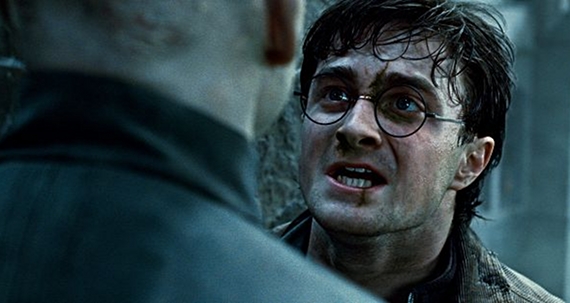 “Anna will probably stay in her room all day,” said the mother of the girl I was baby-sitting sometime in the late 1990s. “She’s reading Harry Potter.” Harry Potter? I went up to see what this new book was.

“Oh my gosh! You’ve never read Harry Potter? It’s the best book ever,” gushed Anna. “They’re at school, and there’s magic, and the paintings are alive, and…you just have to read it.”

That was my introduction to the fantasy epic that would come to loom so large in the cultural firmament that my friend Katie, who’s 25, refers to the release of the final film adaptation, Harry Potter and the Deathly Hallows Part 2, as the end of her childhood.

It’s not really a good movie, but it’s not exactly a bad movie either. Director David Yates has so few degrees of freedom in translating the second half of J.K. Rowling’s 2007 novel to the screen that watching Deathly Hallows Part 2 feels much more like participating in a ritual than being entertained for entertainment’s sake. The book’s events are faithfully rendered, but the movie never really achieves liftoff as an experience that stands independently of, rather than simply illustrating, the book.

I don’t even know whether the movie would be entertaining at all for someone who hasn’t read Rowling’s books. One of the great charms of the novels is the way Rowling slowly dispenses pieces of the incredibly elaborate puzzle she’s crafted—but that means that by this point in the series, following the action means being familiar with the plot to an extent that’s difficult to achieve by simply having seen the movies. If you haven’t even seen the movies, you’ll be completely at sea.

Books are in general better than movies at conveying the intellectual thrill of a dense plot unfolding, and many scenes in Deathly Hallows Part 2 recall scenes in earlier movies that didn’t bear the burden of Rowling’s dreams. The most direct comparison is to Star Wars; not only does Rowling drink deeply from the same mythopoetic cup that besot George Lucas, specific scenes in Deathly Hallows Part 2 align with scenes from the original 1977 Star Wars in ways so direct as to seem almost deliberate. There’s a scene where Harry and his friends fight to stay atop a rising tide of junk in a small space, a la the trash compactor scene; there’s a tight moment under fire on a catwalk that recalls Luke and Leia facing a chasm on the Death Star; and Ron gets an I-chase-you-you-chase-me turnaround straight out of Han Solo’s playbook.

Lucas was drawing from his own inspirations, from Homer to Errol Flynn to Buck Rogers to Leni Riefenstahl—the Hogwarts students marching in lockstep under Voldemort’s new fascist regime recall both Stormtroopers and the SS—but despite his famously tin ear for dialogue, Lucas made those scenes feel thrilling and fresh, abetted by the razor-sharp characterizations of a cast who looked like they were having fun. Nothing about Deathly Hallows Part 2 feels particularly fresh, and it certainly isn’t anyone’s idea of “fun.”

The other instructive comparison is to Peter Jackson’s Lord of the Rings trilogy. Jackson was also closely adapting a beloved series of books, but his delight in translating J.R.R. Tolkien’s tales to the screen was palpable. The different directors who have worked on the Harry Potter series have put different stamps on the material, but long stretches of the series—this final film included—feel dutiful rather than delightful. The most distinctive thing about the Potter films as a series—the fact that the same actors have appeared in all eight films, aging onscreen from children to young adults—is apparent in brief flashbacks, but isn’t taken advantage of as fully as it might have been.

The best scene in Deathly Hallows Part 2 is one of the simplest, with Harry Potter (Daniel Radcliffe) magically reunited in conversation with his deceased mentor Albus Dumbledore (Michael Gambon). Dumbledore, discoursing on imagination and the power of words, delivers what might be seen as Rowling’s thesis, and we’re reminded that the multi-billion-dollar global phenomenon began 21 years ago with a story written in a modest Clapham Junction flat by a young woman who had an idea while riding a train. For all the functional flatness of Rowling’s prose, the Harry Potter series is one of literature’s great feats of imagination, and it may be that, like Tolkien, Rowling will have to wait decades—in fact, past her own death—for a filmmaker to use her stories as the inspiration for movies that are great in and of themselves.

My friend Dana, who accompanied me to the press screening, is a much bigger Harry Potter fan than I am. I’ve read the books; she’s read each book multiple times. She went to see Harry and the Potters last week when they played the Triple Rock, and she was thrilled by the idea of a Books & Bars meeting devoted to the Harry Potter series. She didn’t say that seeing Deathly Hallows Part 2 was the end of her childhood, but for her as for millions of other Harry Potter fans, it was the end of an absorbing decade-plus journey from first cracking the cover of Sorcerer’s Stone to finally seeing the climactic battle between Harry and He Who Must Not Be Named depicted onscreen in 3D.

As we walked out of the theater, I asked, “Was that okay?”

“Yes,” she replied. “That was acceptable.”