What’s here you ask? My new, winter parka, of course! What? You didn’t spend last weekend’s sultry weather internet shopping for 600 fill down winter coats? Your loss people, ’cause I got the very last pink one. AND 61% off no less! (I believe that was some sort of “crazy person” discount, but I am not one to argue.)
Let me explain. Last Sunday I had a scheduled 18 mile run. Hoping to outfox the heat, I got up at 5:30– but no dice. A heavy rainstorm was thundering away outside, so gee golly, I HAD to go back to bed. When I woke up a hour or so later, the sun was beaming merrily outside and yet it was still raining…
… and raining… and raining… and raining…
All the while the air continued to heat up. By time the rain finally tapered off, it was in the eighties and steam was for real rising off the ground and rolling across the running path. I made it eight miles before common sense kicked in and I decided to finish my run on the treadmill. In the basement. Under the air conditioning vent and with the fan pointed directly at me. Periodically I would yell for the kidlets to “… Get down here and put some ice in Mommy’s water bottle!” (A little gin wouldn’t have hurt either, but I was being all responsible or something.)
To cap the whole thing off, I streamed Die Hard with a Vengeance on our television, which was maybe my most genius idea ever. Trust me, it is very comforting, along about mile 16, to know that no matter how horribly crappy you are feeling, John McClane looks worse. 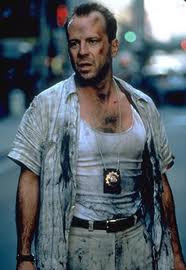 Seriously. Nobody is having a worse day than this guy.

The thing is, something in my brain clicked that day and I am done with summer. D-O-N-E, done. Yes, I DO realize that a mere 10 weeks ago I was shedding tears over the never-ending springtime snowflakes, thank you for the reminder. It’s just that during those sweaty eight miles, I believe that I stored up all the heat I need in my core to get through next winter and so for me, summer is winding down.
I didn’t even realize I had made the switch, to tell you the truth, until Hubby caught me cheerfully humming a little tune and updating my Christmas Gift Ideas list. (Yes, I have one. Nothing weird about it. And furthermore, with that tone, it’s highly unlikely that you’ll ever get on it, so there.)
“You are a NUT!” he said, which pretty much downgraded his future Christmas present from a new electric drill or fishing reel to a toilet plunger. This is what happens when you mock the list. I’ve also made an inventory of our winter gear and made a second list of who needs winter coats, boots, etc. along with their sizes and color preferences.
The effect of this mental mindset/delusion is that I’ve been able to face this tropical streambath of a week with far greater cheerfulness than anyone who knows me would expect. Well, except for that one day, when I had to drive Miss Teen Wonder, Eldest Son and their friends to see Harry Potter in our A/C-less minivan, pick them back up and drive everyone home. THAT day, when the McDonald’s at the mall chose the woman ahead of me as their last customer of the night and refused to sell me a vanilla soft serve cone, I actually teared up. But other than that, I’ve been great.
It helps that I try not to leave the house. I can’t. I’m too busy doing my Christmas shopping online. 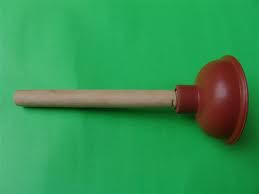