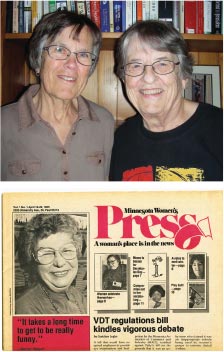 “What if women were in charge of public words and the news? What if our voices were being heard?”

These questions became the impetus for a women’s newspaper when it was just a dream in the head of Mollie Hoben in 1983. At the time, she was on leave from her job as a teacher of vision-impaired students. She was working as editor of the Park Bugle, a community newspaper in St. Paul, and was taking classes in feminist studies in literature at the University of Minnesota. This mix made the timing just right for a conversation one sunny afternoon with her friend Glenda Martin.

“I remember it so clearly,” Martin says. When Hoben said she had been exploring the question of “what news would look like through women’s eyes,'” Martin recalls pausing to feel the strength of the question, and then replying, “Well, let’s find out.”

The times were right for such an endeavor, Hoben says of the mid-1980s. There were other feminist newspapers in the country, and a lot was going on in Minnesota with women’s activism. Martin’s career was in education administration, a male-dominated field. “All of my colleagues were men, even though my students and staff were primarily female.”

The two gathered a small group of women who for a year researched organizational and business structures, media design, distribution systems and funding models to determine how to launch the publication. On April 15, 1985, the first issue of the every-other-week, tabloid-sized newspaper hit the streets.

A key decision was to be a for-profit business. “That was unusual at the time for a women’s organization,” Hoben says.

“I was so committed to the for-profit idea,” Martin says. “It was important that we make a statement that women could create a business based on women’s words and make it work.” Although it took many years for the struggling young business to reach profitability, “I still think it was the right decision,” she says.

The business was launched as a subchapter S corporation, with some 30 women and a few men investing as shareholders, making a statement about their belief in the value of women’s words, ideas and stories.

“At the time many did not think it was possible,” Hoben says. More than one critical adviser told them they wouldn’t last a year.

“Our mission has not changed from the beginning,” Hoben continues, “to honor, promote and spread women’s words and ideas. Our work has always been based on creating a sense of community among readers, in ways that encourage change. The mission still drives what we do every day,” she says.

“One of our key undertakings was to give women a platform, a forum to say their own words. In the Women’s Press, women tell the stories, women make the images through photos and art. There is not an intermediary of male’s eyes. Women own their words and language, and that’s important,” Hoben says.

For 29 years, MWP has also hosted women’s book groups – gatherings of women to read women’s words. “What women discover about themselves because they read women’s words is absolutely amazing,” Martin says. “The Press has done that in print, and we do that in the book groups, too.”

Over the years, the company’s Center for Feminist Reading, led by Hoben and Martin, has expanded to include book trips and reading retreats, and has compiled a list of more than 500 “Great Books” by women authors – chosen by MWP book group members as the books that have most inspired, challenged, intrigued and evoked strong response and discussion.

“A lot has changed for women, between 1985 and now,” Hoben says. “But it’s a mixed picture. There have been changes for the good – women do have more power and visibility. Yet as we know from the topics we still write about – violence against women, the pay gap, etc. – a lot hasn’t changed. We still live in a patriarchal system that does not recognize and honor women as it should. Women are fighting for many of the same things as 30 years ago. There’s a lot yet to do.”

The Women’s Press has evolved over time. Early in the emerging online technology world, MWP’s website was launched. In 1996, Hoben and Martin turned the leadership over to Magnuson and Olson, and in 2009, in the midst of the economic recession, and after nearly 25 years as a biweekly, mostly black-and-white tabloid newspaper, they transformed the publication into a monthly, full-color magazine.

“One of the reasons we are still around and a valuable model is our ability to evolve and change, to learn and grow as the times and the world have changed,” Hoben says. “When I think back to when we started, we were seen as far out, scary and crazy,” she says of MWP’s feminist-based beginnings.

“As I look at the Women’s Press now, I think it is so strong and positive, still feminist – readers get something very different than from a lot of women’s magazines. Hopefully, readers find something richer for themselves,” Martin says.

“Our feminism is more than an ‘equal rights feminism,'” says Hoben. “Our definitions – we have always found that there are many definitions of feminism – have tended to be more about changing the basic values of society and of the individual women and men in it. Our feminism is rich and complex, a sophisticated way of looking at the world and what we want to see changed and how to go at it.”

Now, at 30 years, we still believe that every woman has a story and that women’s words have value and need to be heard.

Article
Bill Lindeke
Do NOT follow this link or you will be banned from the site!
X