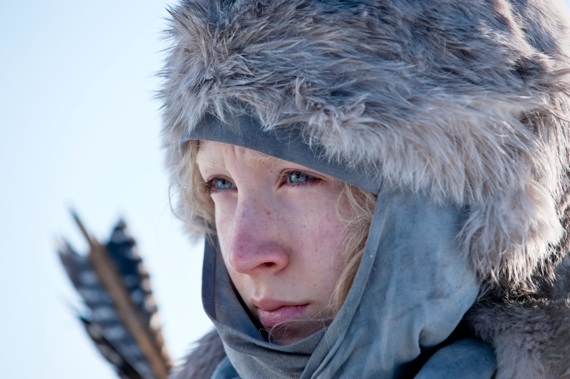 In one of Hanna‘s quieter scenes, two teenage girls lie close and share secrets. Most directors would make this a medium-close shot, so you could see both girls’ faces as they interact. Joe Wright, though, brings his camera in macro-close, panning over the girls’ cheekbones and down into their eyes as though he’s making an IMAX film about the Alps. It’s a visually beautiful series of shots, though it’s not the approach you’d take if you really wanted your viewers to focus on the dialogue and the characters. Dialogue and characters are not this film’s strong suits, but fortunately Wright’s holding plenty of trump cards.

The overvisual secret-sharing scene is typical of Hanna, which is a brilliant cascade of high-style action shots set to a thrilling score by the Chemical Brothers. (Pitted against Daft Punk’s TRON: Legacy score in the battle of EDM soundtracks, the Chemical Brothers win big with Hanna.) Wright gives us a lot to look at and listen to, but not much to think about. That’s fine; you can go ahead and smoke up or get drunk before going to see Hanna, with no fear that you’ll have any trouble following the plot or that you’ll miss any penetrating insights into human nature.

Scripted by Seth Lochhead and David Farr, Hanna finds its eponymous 16-year-old protagonist (Saoirse Ronan) living in a remote cabin with her father Erik (Eric Bana), who’s taught her every language in the world and trained her to assume a false identity. Apparently taking a page from Inspector Clouseau’s training manual, he regularly ambushes his daughter and forces her to beat the crap out of him so she knows how to defend herself.

Why? Because, it’s revealed, Erik knows that someday, when they come out of hiding, Hanna’s going to have to spend her life evading pursuit by the American government—as represented by CIA operative Marissa (Cate Blanchett) and a personal army of heavily armed bros—which helped bring Hanna into being and wants its property back. When Erik and Hanna are ready to roll, they signal Marissa (since Erik departs the cabin by simply walking off into the woods wearing a business suit, it’s unclear why he arranges for his daughter to have an airlift from her mortal enemy), and Hanna takes out the SWAT team Marissa sends to apprehend her. From that point, the chase is on.

From Hanna‘s first frame to its last, Wright keeps the film fast-paced and easy on the eyes. The best thing about the film is that nothing except the plot feels out-of-the-box: every shot feels fresh and inventive. The movie was filmed on location in Africa and Europe, and Wright and cinematographer Alwin H. Kuchler don’t just spotlight the locations, they make love to the locations. From a mountainous desert to a subway station to an abandoned amusement park, everything looks stunning. In this movie, even a Google search becomes an odyssey of sound and light as Hanna, having never used a computer, somehow manages to figure out almost the entire, highly classified, story of her creation. The scene made me wonder whether I should switch from Firefox to Chrome.

All the cast members have to manage in a film like this is to keep looking like they’re taking the whole situation with deadly seriousness, and Ronan, Bana, and Blanchett manage that with aplomb. Comic relief is provided by a scene-stealing Jessica Barden as the talkative daughter of a pair of bohemian adventurers Hanna falls in with. The film keeps dropping hints that the plot is going to become more complex, but it never really does: the characters learn things (usally things we’ve long since figured out), but they don’t develop as characters. As movies about teenagers go, this is like the anti-Breakfast-Club.

Friends of mine who have seen Hanna are already raving about it in tones of unqualified adulation, and I can understand why: it’s certainly a rush. It’s the filmic equivalent of Pop Rocks: it crackles and pops and makes you smile and maybe even gasp a little, and then it’s gone.