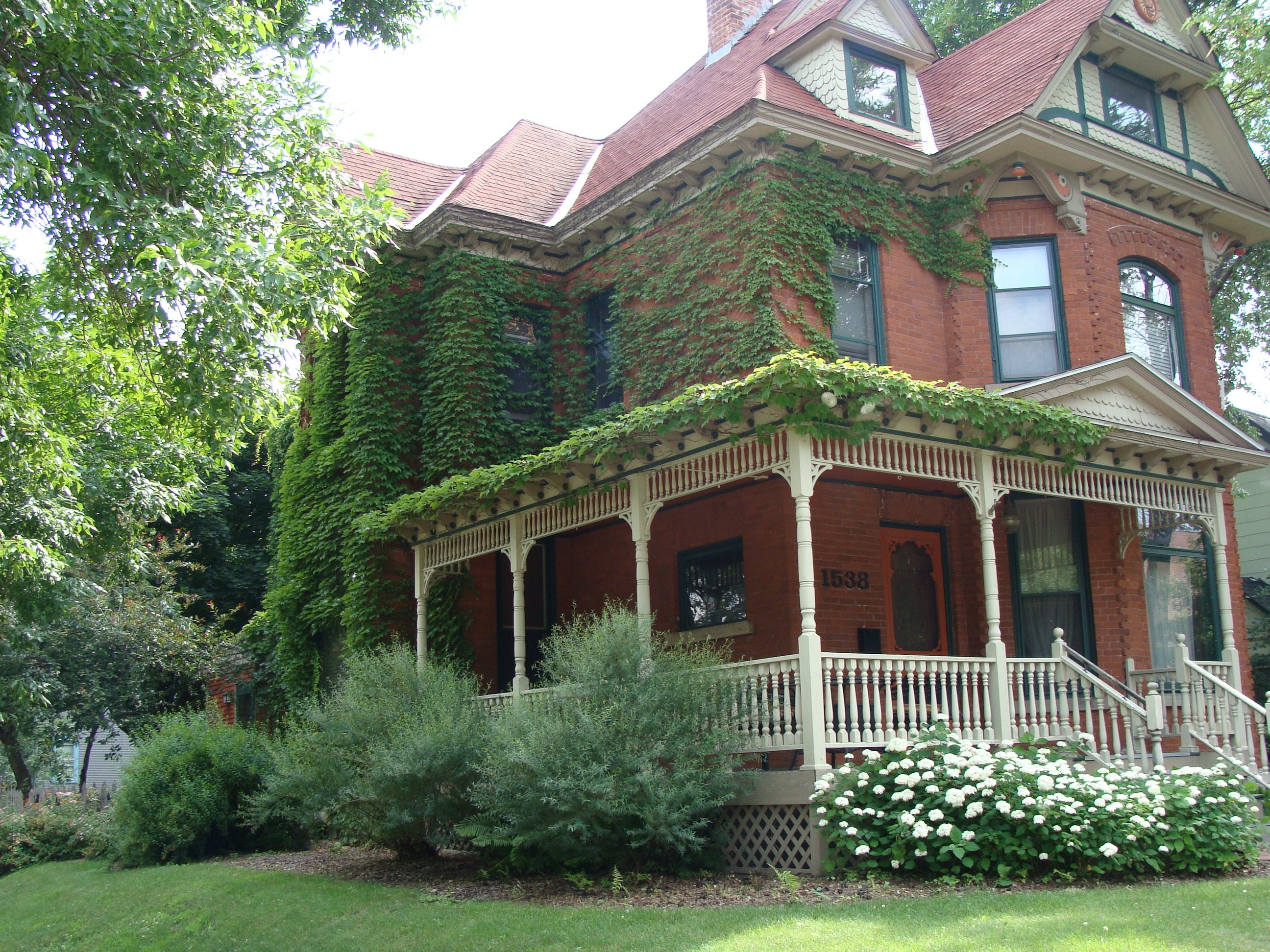 This home at 1538 Englewood Ave, built in 1887 and currently serving as the Hamline "Guest House" was targeted for demolition in Hamline's 2008 expansion plan.

People walking or driving along Minnehaha Avenue and neighboring streets near Hamline University may have noticed bright red signs beginning to dot several residential lawns. They look like the standard campaign sign one often sees this time of year, except no candidate’s name is to be found. Instead, the words “STOP THE DEMOLITIONS” appear in large block letters, with the added message, “Tell Hamline University to Respect Our Neighborhood, Not Tear It Down!” printed below.

What’s going on? Is Hamline University in the midst of a major expansion? That’s what many in the neighborhood would like to know. In July, the University razed the White House, an “11-room, four-bath Greek Revival” structure built in 1903 that housed nine Hamline presidents from 1912 to the 1990s but which the school claimed was too expensive to maintain. (Note: in early 2005, the Board of Trustees purchased a six-bedroom Summit Avenue home to serve as the “new” White House. Its cost? $1.5 million.) Four more homes were torn down along Hewitt Avenue, and demolition began in early July on the historic G.D. Walcott house at 1549 Minnehaha, a Victorian home built in 1888 by Hamline’s former chair of the Psychology and Philosophy Departments. (That demolition was temporarily halted by University officials when concerned neighbors brought the matter before the Hamline Midway Coalition.)

In response to those demolitions, local residents have come together to form Historic Hamline Village, the group behind the new lawn signs, and created a Facebook page by the same name. The group believes that any future expansion by Hamline should be based on sensible development strategies that incorporate community input and innovative solutions rather than simply tearing down historic homes to create open lots. They have called on Hamline to voluntarily agree to a one-year moratorium on any further demolitions in the neighborhood and to engage in a series of conversations that will address the university’s potential expansion needs while minimizing impacts on the surrounding community.

Of course, it’s hard to know what Hamline is thinking these days. The university’s latest expansion plan was unveiled more than six years ago at a time when the administration anticipated undergraduate enrollment would grow by 5% per year in five years—or 500 more students by 2013. In reality, overall enrollment has only grown 5% during the past six years, or less than 1% per year. And whether those 100 additional students wish to live on campus or pursue off-campus housing options is unknown.

Why Hamline has suddenly dusted off its old expansion plan is also unclear, but the recent demolitions appear consistent with the administration’s 2008 strategy that called for new dormitories, additional parking lots, and more green space by expanding the campus boundary southward to Minnehaha Avenue and tearing down as many as twenty-two homes, most of which date back to the early 1900s. However, there have been no public meetings held in the past six years, nor has the university approached the city seeking a formal boundary change.

What the university has done is engage in “demolition by neglect” with the properties it already owns, including the historic 1549 Minnehaha Ave home that it acquired last year. The previous owner had installed new plumbing, new windows, new electrical, a new roof, and was in the midst of replacing the siding when the project was abandoned because the home was clearly on Hamline’s hit list.

The last Hamline expansion included the removal of several homes along Englewood Avenue in order to build a new graduate school dormitory. In the last five years, graduate school enrollment has declined nearly 25% and law school enrollment by nearly 40%. Given the ever-increasing cost of higher education and the recent trend in developing online learning platforms, are more dormitories and parking lots what’s really needed to grow enrollment? Or would the university benefit more by embracing the historic character of the surrounding neighborhood and repurposing the many grand old homes as specialty residences, campus offices, or even to incubate student-run business startups?

To date, Hamline has provided no formal response to neighborhood concerns about the fate of 1549 Minnehaha or the request for a moratorium on future demolitions.

According to an agenda agreed upon between Historic Hamline Village and the university, those issues—as well as an update on Hamline’s development plan—will be addressed and debated at a public forum this Wednesday, September 17th, from 6:30 to 8:30 p.m., at the Hamline United Methodist Church, 1514 Englewood Ave.

Tom Goldstein is a lawyer, former St. Paul School Board member, and a founding member of Historic Hamline Village.