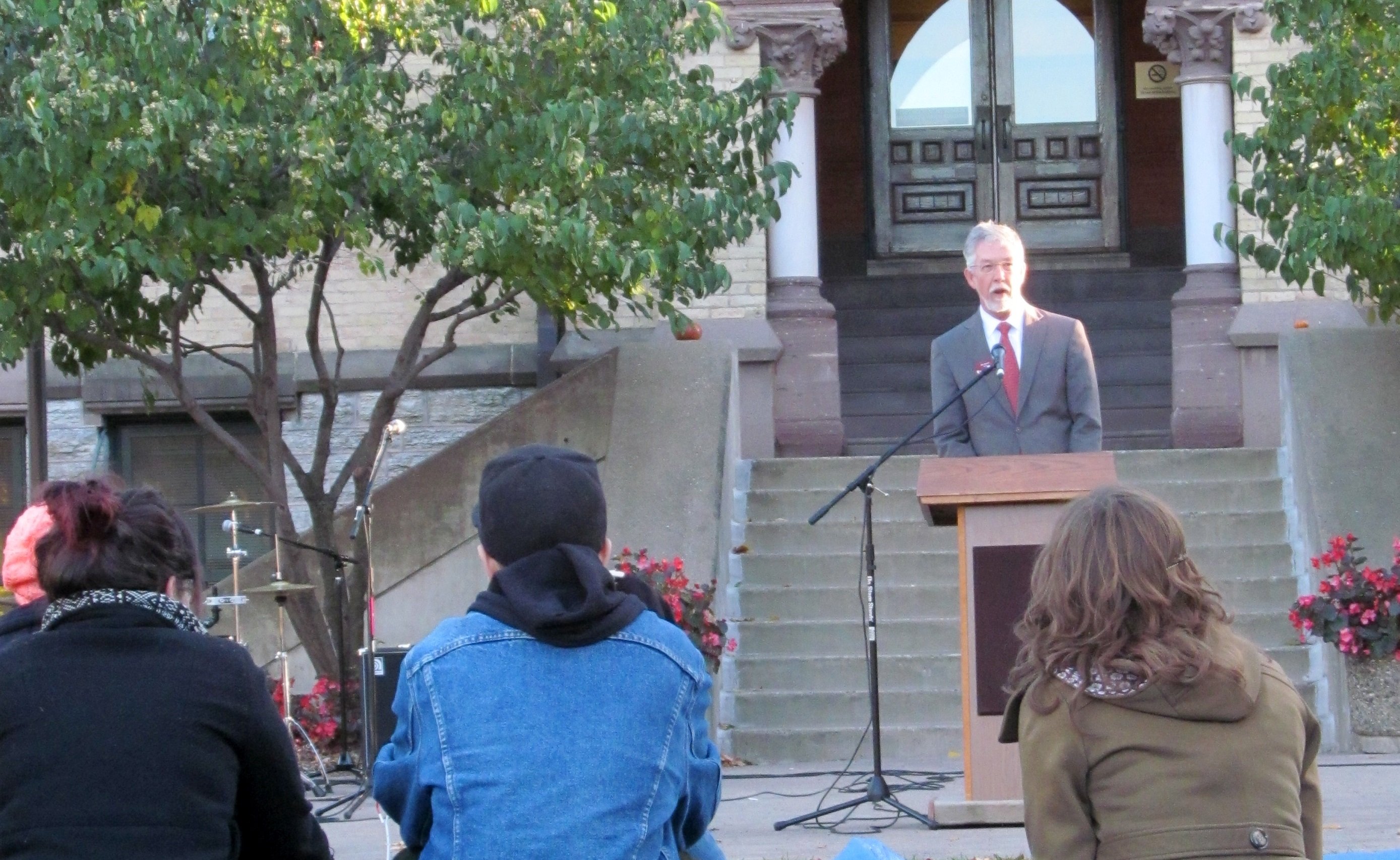 (Photo by Sarah Ellen Miller) Hamline's Provost Dr. Eric Jensen speaks to eventgoers at Hamline's Old Main Lawn on Oct. 21. When it comes to sexual assault at Hamline, he said, "Much work remains, but we're moving."

There’s a time to speak out and a time to shut up. That was the message being spread at Hamline University’s Take Back the Campus last week.

The university’s Women’s Resource Center hosted the event on Oct. 21 with the goal of including a diverse group of speakers and performers. Informational tables and a line up of a wide range of speakers were aimed to rally against all forms of gender violence and opening a dialogue about how to better prevent sexual assault.

“Creating a culture of respect that celebrates and requires affirmative consent and positive sexuality is hard work,” said Cards Against Harassment founder Lindsey. “It means shutting up that voice once in a while and letting other people talk about their experiences.”

Lindsey, who keeps her last name private to protect her professional career, designed and printed business cards that she would give to cat-calling men in downtown Minneapolis. The encounters, many of which she recorded on her phone and uploaded to YouTube, reveal the unbalanced power dynamics in street harassment, where women are often not shown respect that would be given to men.

At the event at Hamline, Lindsey said individuals coming from priviliged backgrounds, like herself, sometimes need to step back and let others have the stage.

As a white, cis-gendered female, Lindsey said, she knows her experiences are not as extreme as many women of color, or transgender persons. She recalled examples of recent tragedies as a result of gender violence, such as an instance in Detroit earlier this month where a woman was shot and killed after she refused to give a man her number.

(Lindsey’s video, posted back in July, shows her encounter with two male cat-callers in downtown Minneapolis)

Communications Director for the Minnesota Women’s Consortium Eric Baudry also spoke from a perspective of privilege, but chose to direct his words to other cis-gendered males. “I think it’s important right now to recognize why sexual assault of people like me is a fundamentally different issue than sexual assault of women,” Baudry said.  “That’s because not matter how awful sexual assault may be to individual men, men have the privilege to think of sexual assault as an event and not as an eventuality.”

Baudry said in order to become a feminist ally, men need to educate themselves about current events and terminology, acknowledge their own male privilege, speak out against acts of misogyny and believe people when they report sexual assaults.

As the event was closing, Baudry said he felt the evening went very well and that he was happy to see the goal of a diverse attendance being met. “When you talk about issues as important as gender based violence and sexual assault, it’s really important to make sure that all of those perspectives and viewpoints are represented,” he said, “I think Hamline did a really great job of doing that.”

Women’s Resource Center graduate assistant Natalie Robinson, the event coordinator, focused on increasing the diversity of representation at the event this year. “Basically it’s not just a white heterosexual women’s rally. We really wanted to make it all encompassing and inclusive,” Robinson said.

In order to make the event more open to individuals without any previous connection to the subject matter, the event began with definitions for forms of sexual violence. Tables lined the Old Main Lawn on Hamline’s campus with representatives from student groups and community organizations providing information about the ways personal violence relates to their particular constituents.

Later, representatives from Hamline’s Students Preventing Sexual Assault Elena Anderson and Brynna Morgan listed statistics gathered in a survey last spring. Of the undergraduates surveyed, a fourth had been sexually assaulted in their lifetime. Of the students who answered that they had been assaulted since they started at Hamline, slightly more than half responded that the assault took place on campus. These statistics are not more extreme than national trends, with an estimated 1 in 4 college women experiencing sexual assault before graduating.

Morgan said Hamline does not have to contribute to national trends. “We have the ability to be exceptional on this campus.”

While the event focused on ways individuals, groups and communities can better prevent and respond to sexual assault, it also allowed for survivors to speak about frustrations. A number of students performed spoken word pieces, including Kenny Ngo, Chia Lor, Puck Matz and Blythe Baird. Topics ranged from personal survivor stories, role of bystanders in prevention and the objectification of women.

“I was glad to still hear a good dose of anger,” Lindsey said. “I think a lot of the calls for collaboration and for friendly accessible messaging can leave certain groups behind, because it doesn’t work for everyone.”

She said in order to make policy changes and work to solve the national prevalence of gender violence, there needs to be a balance between anger and constructive conversation.  “Ultimately it’s somewhere in between pure madness and pure kumbaya.”

Correction: A previous version of this story incorrectly attributed two survey statistics to one another. Of the undergraduates surveyed, a fourth had been sexually assaulted in their lifetime. And of the students who answered that they had been assaulted since they started at Hamline, slightly more than half responded that the assault took place on campus.