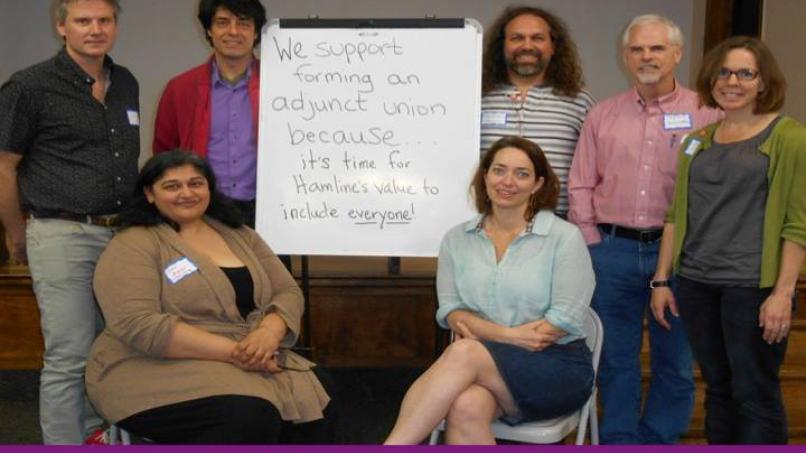 In the first union-organizing election among faculty members at a private college in Minnesota, adjunct instructors at Hamline University in St. Paul voted to join Local 284 of the Service Employees International Union.

Eligible faculty members at Hamline cast their ballots by mail earlier this month. A vote tally took place this morning at the Minneapolis office of the National Labor Relations Board, with 72 percent voting in favor of forming the union.

In a press release announcing the election results, SEIU declared the election results a “victory for adjunct faculty across the nation,” noting that Hamline faculty members had joined instructors at Northeastern University, Georgetown University and a growing number schools across the U.S. in forming unions via the SEIU’s Adjunct Action campaign.

Forming a union is also a step toward improving higher education for students and instructors at the 160-year-old institution, adjunct faculty members said. David Weiss, an adjunct instructor in Hamline’s Religion Department, called it a “great day for faculty, students and the whole Hamline community.”

“By coming together to address the low pay and lack of benefits and stability for adjunct faculty, we are taking steps to strengthen all of higher education for students and faculty alike,” he said. “I’m confident that our success today will help empower other workers, including adjunct faculty like ourselves at schools like St. Thomas, to change working and learning conditions in higher education.”

Adjunct instructors at St. Thomas are scheduled to vote on joining SEIU later this summer.

Contingent faculty at Macalester, who petitioned the NLRB for a union election in May, have pulled that petition, and no election is scheduled.