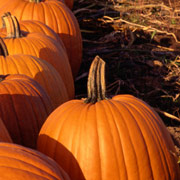 While most national attention is focused on the “Frankenstorm” that pounded the East Coast this Halloween, Minnesota farmers appear to have wrapped up a good to great harvest for most crops this season.

We don’t know that officially. USDA offices in Washington were still closed as of Tuesday morning so the weekly crop weather and progress report from the Minnesota office of the National Agricultural Statistics Service had not been released. That weekly report is issued locally at 3 p.m. on Mondays during the growing season.

But there were plenty of signs in Minnesota that the combines are heading for the sheds and fall specialty crops such as pumpkins are harvested. This mostly brings to an end what promises to be a successful harvest for the Minnesota economy if not record setting yields for most crops.

“We’re tearing down the maze as we speak,” said Sharon Peterson who with husband Sever Peterson and family members operates Sever’s Corn Maze & Fall Festival in Chaska, on the southwest edge of the Twin Cities. Somewhere between 40,000 and 50,000 people visited the maze, bought pumpkins, enjoyed hayrides and played on the Peterson family’s farm grounds since mid-September.

Sunday, was the last day of the season for Sever’s Corn Maze, considered by many the granddaddy of Minnesota corn mazes, pumpkin patches and similar fall festivals that combine agriculture with tourism. By some listings and especially the Minnesota Grown directory published by the Minnesota Department of Agriculture, there are at least 74 such enterprises scattered among 18 Minnesota counties.

Today – Halloween – is the last day of the fall retail and family entertainment season for Country Sun Farm in Lake Elmo on the opposite end of the Twin Cities. It has been a “pretty good” year at Country Sun, said Eileen Bergmann, the “mom” of the family clan’s farming, greenhouse and garden center businesses. Leftover pumpkins and gourds will disappear after today and will be replaced by wreaths and Christmas trees by Thanksgiving for the start of the Bergmanns’ Christmas retail season.

“Weather really influences traffic,” she said. “A year ago (2011) we had an especially warm fall and that really brought out the people. We had a cool weekend a while back that slowed traffic for a few days, but it’s been good.”

Pumpkins grew surprisingly well this year despite drought conditions. This crop is mostly for ornamental use and is considered a “fun” farm product. It is such as comparatively small specialty crop in Minnesota that actual production data aren’t available.

With Halloween serving as an unofficial end of the growing season, let’s pause to look at where Minnesota ranks for major commodities and farm products as well as for smaller, specialty crops for which data are known.

In 2010, the last year for which data are complete, the National Agricultural Statistics Service ranked Minnesota first in sugarbeet production, third in soybeans and spring wheat production, and fourth among states in corn production among the nation’s largest commodities.

Among crops of lesser production and value, and in some cases specialty crops, Minnesota ranked first in oats, sweet corn for processing, and green peas for processing; third in canola production for the oils market, fourth in dry edible beans and flaxseed, and fifth in sunflower production. Minnesota farmers also make the top 10 lists for potatoes, barley and for all wheat classes.

Given the widespread drought across most of the major agricultural states this year, Minnesota’s ranking will likely move up in several crop categories when 2012 production data are assembled.

Meanwhile,with grants from USDA, the Minnesota Department of Agriculture, the Farm Business Management (FBM) programs at the Minnesota State Colleges and Universities system (MnSCU), and the Center for Farm Financial Management at the University of Minnesota have started to track financial performance on specialty crop farms in Minnesota.

In a report released earlier this year, the collaborating groups tracked production costs and wholesale values for apples, blueberries, cantaloupe, grapes, pumpkins, raspberries, strawberries, sweet corn and assorted vegetables. The data were assembled from 47 farms that participated in the ongoing farm management training programs between 2008 and 2011 and thus may be too small a sampling to reflect industry sector results.

Pumpkins are fun, and people like to grow them as well as carve them. That aside, the collaborative Minnesota Specialty Crop Farm Performance study is revealing. It shows why fun-loving entrepreneurs would rather sell their pumpkins at retail than at wholesale, and why the Bergmanns and Petersons have diversified by turning their farms into family fun centers for the metro area.