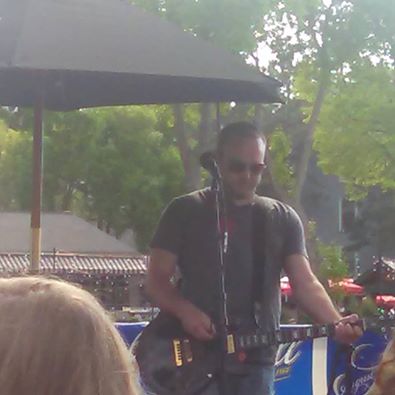 Saturday night at the Cabooze Gabriel Douglas fronted the 4onthefloor. They were loud and rocking and disheveled, to put it lightly. There were two new members on the lineup since I had last seen them play, leaving Douglas the only original member. The groove was different but the place was packed, partially because the show was moved indoors after the Cabooze patio was rained out. It was hot and sweaty with tons of people drinking, dancing and singing (or shouting) along. Douglas sported his signature big beard and sweaty curls.

Fast forward to Wednesday at the Bayside Grill for The Current and Schell’s Brewery patio series, Douglas is unrecognizable with the beard completely gone and head shaved. Fans in the audience nearly gasped when they realized it wasn’t a stranger setting the stage; it was the same man many of us saw tipping and dripping on stage nights before. It was and it wasn’t the same man.

Playing solo, Douglas started with Undertow, which he had sung Saturday as well. Only at Bayside, it was slower, sweeter more soulful. I heard the waitress say, “he has such a nice voice.” And he does but on Saturday night he “rocked” there was no nice or even good or bad to it, just rocking. As much fun as that is, it’s enjoyable to see another dimension. Douglas said himself, it’s “sad and sappy” but in a good way.

Douglas writes good songs; the beat is stomping but the lyrics are astute. On Wednesday the lyrics played a more center stage than usual. Douglas’ voice did as well. While he pulled out the raw auditorium size voice a few times, the voice was softer and lower through most of the set. He played a few new songs. They seemed to have as much of a country feel as the usual blues hues but that might be because of the solo guitar backing. It’ll be interesting to watch Douglas and 4onthefloor move forward. It’s tough not to watch it from afar without thinking of their song First on a List of Things I Don’t Need. (The song starts, “Change, who needs it/It just jingle jangles in my pocket.”) But change can change a person!