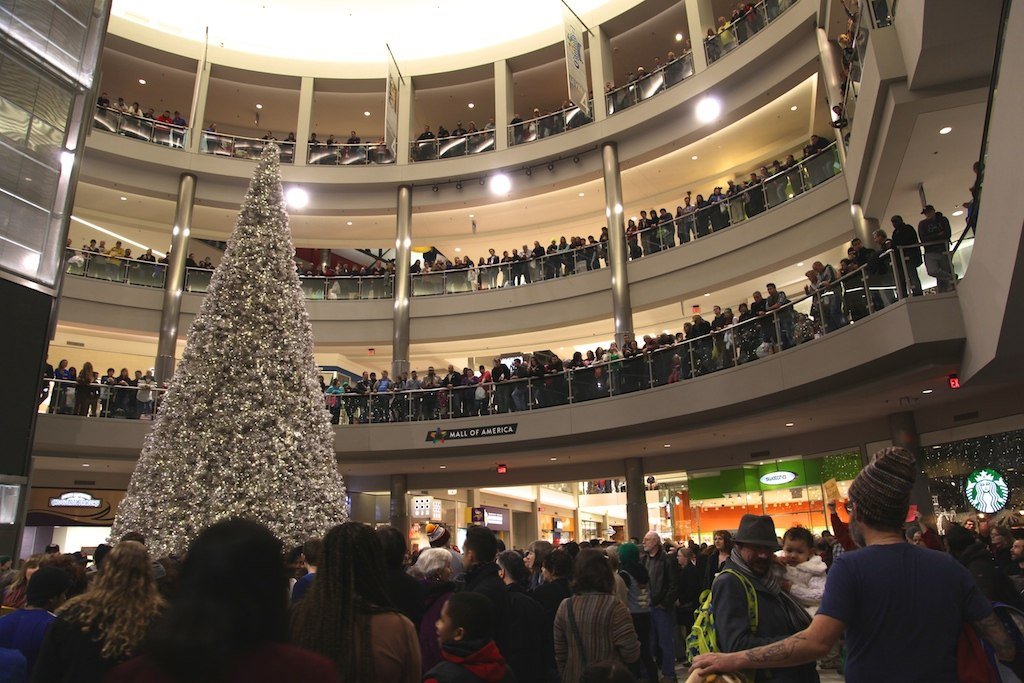 I’d seen a lot of references to the disappointing 1999 decision of the Minnesota Supreme Court in upholding the legal right of the Mall of America to exclude demonstrators.

The inspiring BlackLivesMatter action at the Mall this weekend–well covered in the Daily Planet–caused me to finally look into that case. What I found was that the Court of Appeals and the Supreme Court failed, to put it mildly, to distinguish themselves. But this case is also the story of a Gutsy District Court judge, Jack Nordby, who did distinguish himself.

Nordby was the trial judge and found the defendants Not Guilty. The Attorney General of Minnesota, shamefully, appealed. The AG apparently was Hubert III in the beginning, replaced by Mike Hatch during the case.

Nordby apparently wrote a long decision in the matter but I’ve not been able to find it online.

The Court of Appeals decision: http://caselaw.findlaw.com/mn-court-of-appeals/1178147.html

The case was remanded back to Nordby, who said this in his final Order: Not Guilty.

You really should read the whole thing, here: http://www.homelinemn.org/wp-content/uploads/State-v.-Wicklund-Final-Verdict.pdf

A couple of excerpts to, hopefully, get you interested:

4. I had, before denying the motion to dismiss, reflected upon the constitutional question and delivered myself of certain obiter dicta, [“remarks of a judge which are not necessary to reaching a decision, but are made as comments, illustrations or thoughts.“] the crux of which was the rather simple (and, at least to me, obvious and scarcely debatable) proposition that when the people of Minnesota contributethrough enforced taxation a very large sum of money to enable private persons to erect a commercial property, they (the people) are entitled to expect that their Constitutional rights, more particularly their right to free speech, will be respected on that property. As it turned out the dictum was debatable. But it was nevertheless dictum, the harmless musings of a lowly district judge. The Supreme Court (otherwise so properly unwilling to decide non-issues or to promulgate advisory opinions) apparently misunderstood the nature of the dictum, (for which I, as its apparently insufficiently lucid author, am no doubt to blame), decided these remarks were “critical” to the case, and directed the Court of Appeals to hear the appeal (no doubt to that court‘s surprise and displeasure).

I am naturally bound by the result reached by my superiors on the Supreme Court, and I do not propose to disobey it. But because the opinion misrepresents, both affirmatively and by omission, what I wrote, and because my unimportant dictum has now been transformed into law (contrary law, but law nevertheless), on a surpassingly important subject, as a matter of personal privilege I shall allow myself a few corrective observations.

Although my order expressed a Constitutional belief, and how I arrived at it, it made no ruling upon the right to free speech (and if it had, it would have been of no precedential force). The Supreme Court in this case, however, has appropriated a trial judge’s unessential opinion as a
vehicle to render a constitutional decision. It has, in other words, created a constitutional confrontation where no justiciable controversy existed. It has not merely disagreed with my views and scolded me for them; it has made new (constitutional) law where none was called for. (Had I
granted the motion to dismiss on constitutional grounds, of course, the prosecution would have been quite justified in appealing and the Supreme Court would have had a justiciable issue before it.)

What is more, in doing this the court misrepresented my order and impugned my scholarship, leaving the impression that my reflections upon the Constitution were not only incorrect but casually, carelessly and superficially achieved. But an attack on a judge’s scholarship should at
least embody some honest scholarship itself, should at least reveal that careful attention was paid to what is being attacked. A reading of the opinion suggests, however, that the Supreme Court either did not read my order at all (relying perhaps on the Court of Appeals‘s opinion instead), or at best read it carelessly.

Had they read my order, the judges would have found this rationale:

l. The Minnesota framers considered and rejected the language of the federal First Amendment. 2. They deliberately chose instead language that is very different and much broader and more affirmative protection of speech. (I analyzed the constitutional debates in detail to demonstrate
these points.)

3. The First Amendment merely forbids Congress to abridge speech; a negative formulation. The Minnesota version insists affirmatively that “all persons may freely speak, write and publish their sentiments on all subjects.” The courts above are unable to see any difference, or any
significance, in this remarkable, obvious and radical reformulation.

4. Since the Minnesota language is undeniably very different, it must mean something different, or the drafters engaged in a futile and meaningless exercise.

5. Since, furthermore, the state may grant greater but not less freedom of speech that the First Amendment does, the only possible conclusion is that this provision does precisely that. (How much greater, and in what specific circumstances, are, of course, quite other matters. But it is
absurd and disingenuous to say the Minnesota clause does not provide different and greater protection.)

6. The Minnesota Constitution, as I pointed out, was drafted in the turmoil approaching the civil war, when states’s rights and individual liberties were very much an issue.

7. The Minnesota drafters were chary of the danger of using public funds for private purposes, as I also demonstrated, a concern memorialized in the many provisions of Articles X, XI and XII (as now numbered). For example: “The legislature shall pass no local or special law . . . creating
private corporations, or amending, renewing or extending the charters thereof,” or ” granting to any private corporation, association, or individual any special or exclusive privilege, immunity or franchise whatever, or authorizing public taxation for a private purpose.” (Article XII, Section l.)
Yet here we have taxation benefitting a private corporation and, the Supreme Court says, this may extend to a 100% subsidy with no constitutional consequence (in the sense at issue here, that theublic contribution would carry with it the duty to respect the rights so assiduously protected
elsewhere in the Constitution). (The fur trade was a particular concern to the Minnesota founders, as I also showed).

And so on. Read the whole thing. How many District Court judges, or first-level judges anywhere, have the gumption to stand up to the highest courts in the state in this way? When we are almost every day reminded of the harmful antics of the clowns dominating the US Supreme Court, it’s nice to be reminded that some judges do honor to their profession. Nordby reached the mandatory retirement age of 70 in 2011.