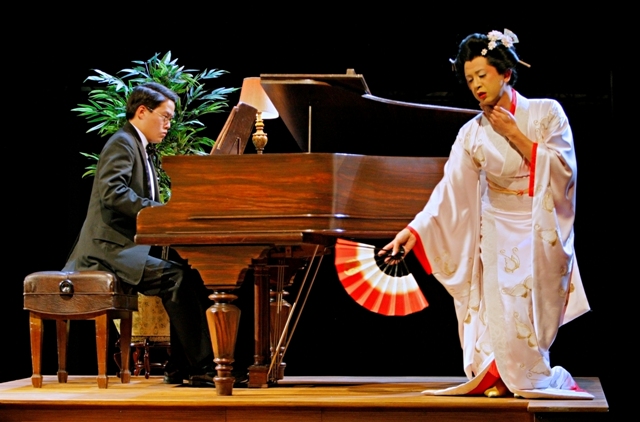 Over 20 years ago, David Henry Hwang wrote M. Butterfly, his monumental play addressing fantasy and power as they relate to East-West relations. The Guthrie’s current production of the work, directed by Peter Rothstein, masterfully illuminates Hwang’s deconstruction of Puccini’s opera Madame Butterfly, in a gorgeous and intelligent production that both draws the audience in to the story and illuminates the critical ideas with which Hwang’s script grapples.

The plot involves elements from both Madame Butterfly and from a historical incident involving a French diplomat accused of treason in 1986. The diplomat had carried on a 20-year affair with a Chinese spy, first in China during the Vietnam War and then in France. In court proceedings, the diplomat swore that not only did he not know that his lover was a spy, he also didn’t know that his lover was a man. In the program notes, Hwang quotes the diplomat from a newspaper column the playwright read in 1986: “I thought she was very modest. I thought it was a Chinese custom.”

Hwang theorizes that this bizarre turn of events comes about because the diplomat, called Rene Gallimard (Andrew Long), is so blinded by his fantasy that he cannot and will not face the truth. Gallimard’s refusal to see his lover, Song Liling (Randy Reyes) for who he really is serves as a metaphor for Western relations toward the East. Hwang writes that the diplomat’s mistake is “consistent with a certain stereotyped view of Asians as bowing, blushing, flowers.” Hwang concludes that the diplomat fell in love not with a person, but with a fantasy stereotype: a demure, submissive “Oriental” woman.

The Guthrie’s production accentuates Gallimard’s fantasy by placing scenes where he describes Madame Butterfly high above the main action of the play in what looks like a movie screen with an illustrated backdrop. The physical distance dramatizes how far removed from reality Gallimard’s fantasies really are. The set design by Allen Moyer, lighting design by Marcus Dilliard, and costume design by Linda Cho all make the fantasy more colorful and alluring than the drab world where Gallimard lives—both in his life as a diplomat and also in the confines of his dark prison cell.

Andrew Long is appropriately bumbling and pathetic, which is needed to draw the audience’s sympathy. In order for the play to work, we need to understand how he could have been seduced into believing such an outrageous lie. He is duped by love, but not real love. It is the love of an idea, one that satisfies his longing for power and control, which is something the mid-level diplomat and lifelong dork hasn’t experienced much of. The allure of the gentle submissive butterfly that his “girlfriend” represents is so pleasurable to him that he can’t see the truth.

Randy Reyes is stellar in the role of Song Liling. He transforms believably into a woman so that even the audience can see at times how someone might mistake him for one. Reyes flip-flops between Liling’s coyness and her pretended shyness as he embarks on his seduction of Gallimard, and then changes effortlessly into the Chinese citizen who is cold and calculating but also afraid: after all, if he doesn’t succeed in his plot, he’ll after to answer to Chairman Mao, who has decreed homosexuality as being against Communist principals. Reyes also adds another layer to his performance, one that I have never seen in other productions that I have seen of this play: a quality of yearning. Though it is very understated, his performance seems to suggest that a part of him does love Gallimard. It’s almost as if he wants his lover to know the truth, to love him for whom he really is and not for the fantasy.

The rest of the cast rounds out the production quite well, particularly Tina Chilip’s wonderful performance of Liling’s boss Comrade Chin. Charity Jones, too, does a wonderful job playing Gallimard’s wife Helga.

M. Butterfly, which won a host of awards when it premiered 20 years ago, including a Tony Award for best play of the year, the New York Drama Desk Award, the Outer Critics Circle Award for best Broadway play, and the John Gassner Award, establishes itself further in this production as one of the great plays of the twentieth century. It’s an important work that speaks to both the historical imperialism of the West toward the East, and also to the lingering stereotypes that continue to pervade society.