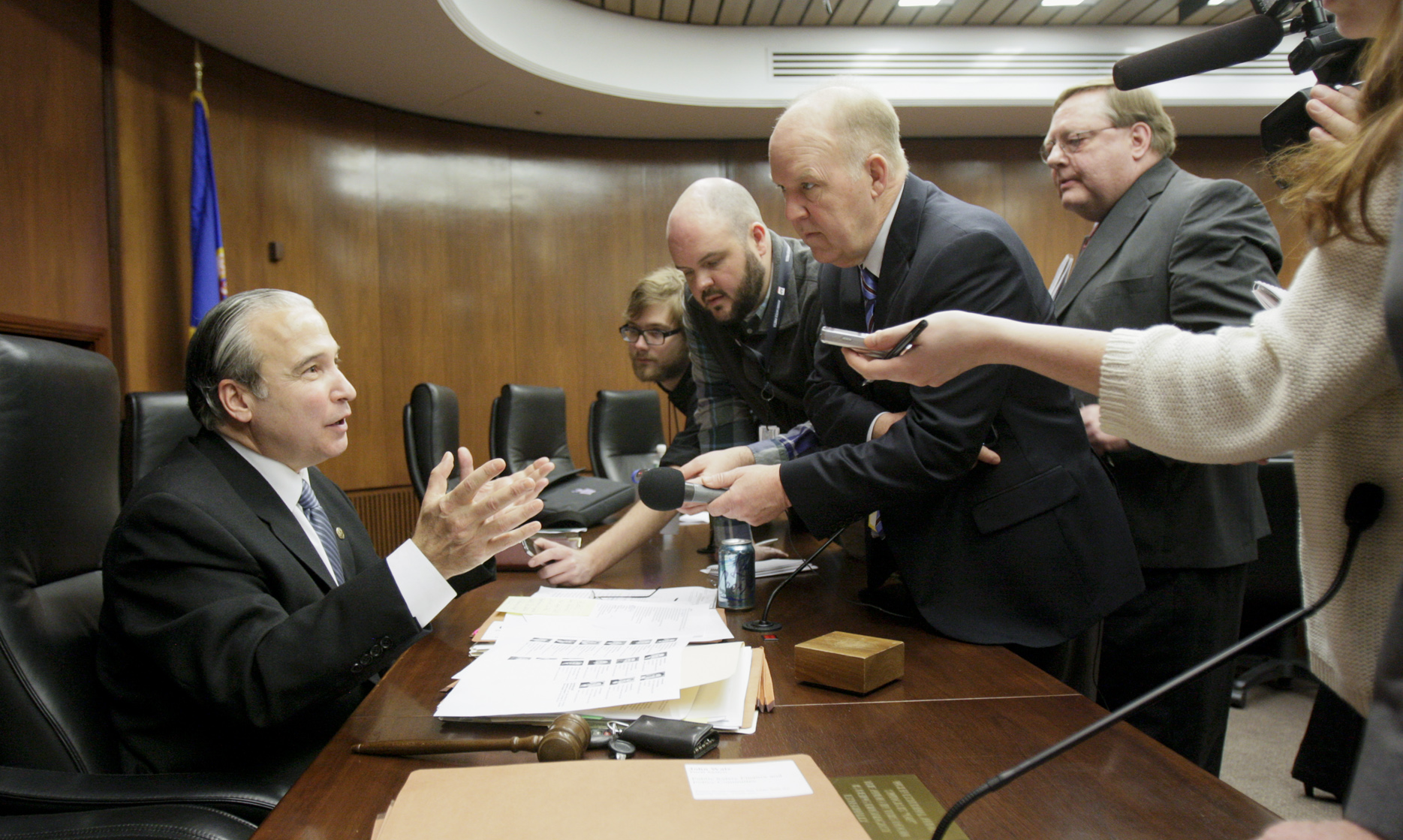 (Pictured above, members of the Capitol press corps gather around House Public Safety Finance and Policy Committee Chairman Michael Payman, left, after the first of a series of hearings on gun bills.)

A series of gun bills before a House committee are pitting those who want enhanced gun safety against those who believe the integrity of the Second Amendment needs to be upheld.

In a packed committee room Tuesday morning, proponents and opponents of two bills respectfully offered their thoughts on proposed legislation that would close some perceived loopholes in background checks at gun shows and potentially further limit people with mental illness from accessing firearms.

The bills are the first of what is expected to be three days of testimony about upwards of a dozen gun bills, including the banning of assault weapons and high-capacity ammunition magazines and penalties for unlawfully possessing a firearm on school property.

The House Public Safety Finance and Policy Committee was scheduled to hear more bills beginning at 6 p.m. Tuesday, and 10 a.m. Wednesday and Thursday. If necessary, the Thursday hearing would reconvene at 6 p.m. Live coverage of most, if not all, hearings will be available on the House website.

No votes are scheduled to be taken, but Rep. Michael Paymar (DFL-St. Paul), the committee chairman, said he hopes to put together an omnibus gun bill later this month that would encompass some of the ideas shared during the hearings.

“We all have a piece of the truth, and neither side has all the answers,” he said.

Sponsored by Paymar, HF237 would expand to gun shows and private sales, including those online, the background check now required when a licensed firearm dealer sells a weapon. “It would require additional information when applying for a transferee permit to law enforcement; it provides language on verification that the person who is applying to law enforcement is actually the person they say they are, it increases the waiting period from five to seven days and it adds a penalty to a person who knowingly transfers a weapon to someone who is disqualified from possessing.”

Dennis Flaherty, executive director of the Minnesota Police and Peace Officers Association, was among those testifying for the bill. “There are certain people who just simply should not have (guns). Now is the time for us to do more to prevent criminals and people experiencing mental illness issues from obtaining them,” he said. He added that selling weapons at a gun show sans a background check is “a gaping hole” used by felons and people who fail a background check.

He said the bill has strong support from the public, sportsmen and most members of the law enforcement community.

“This bill is sensible, and it will work,” Flaherty said. “It still allows transactions to be made by private parties, neighbors and friends. It just requires the buyer to go to their police department, obtain a transfer permit and then conduct the transaction through a federally licensed dealer.” The bill would not affect sales among family members.

According to a handout from the Minnesota Chiefs of Police Association, federal law requires individuals “engaged in the business” of selling firearms to have a federal firearms license. Holders are required to conduct a background check and maintain a record of all gun sales. However, other kinds of sales — such as between private parties — are exempt.

“Criminals purchase guns from other criminals, they steal guns, because they’re criminals,” Andrew Rothman, vice president of the Gun Owners Civil Rights Alliance, said in opposition to the bill. “This won’t stop the criminals, but it will put an unfair damper on a constitutional right to keep and bear arms.”

Chris Rager, state liaison for the National Rifle Association of America, said private sales are the exception, rather than the rule. “It’s also important to note that firearm ownership here in the United States is at an all-time high and violent crime is at an all-time low. Universal background checks would only be an inconvenience for some law-abiding citizens.”

Rep. Jim Newberger (R-Becker) sees the bill as an “egregious attack” on the Second Amendment. “We are creating a second class of citizens; a second class that says once you are mentally ill you are always mentally ill and therefore you shall not have the right to defend yourself.”

People with a mental illness would be further limited from accessing firearms via HF240. It would allow a local authority to require a person whom they have had prior contact suggesting a mental health or chemical dependency problem to get a statement of fitness from a doctor or mental health professional before permitting the applicant to receive a permit to buy a gun.

“This is not about trying to prevent them from getting it; this is about making sure they are safe when they do,” said Rep. Dan Schoen (DFL-St. Paul Park), the bill sponsor.

Hennepin County Sheriff Rich Stanek noted that when people with a mental illness are correctly treated, they can be just as safe as those without an illness.

Rep. Tony Cornish (R-Vernon Center) said current law provides a sheriff or police chief to deny a permit if they can prove it with facts. “I can’t imagine a doctor putting his or her signature on something that would allow somebody to get a permit just out of the goodness of their heart and worry about the lawsuits that would come if something ever did happen.”

Other bills scheduled to be heard this week include:

• HF184, which would create a registry of people who voluntarily prefer to be treated as ineligible to possess firearms for any self-determined period of time;

• HF241, which would, in part, make it a crime to manufacture, import, transfer or possess an assault weapon with limited exceptions;

• HF242, which would create a large-capacity magazine crime; and

• HF244, which would expand the penalty of transferring firearms to an ineligible person.