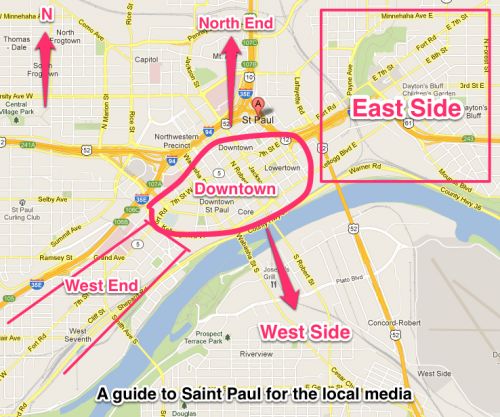 It is Friday and Fridays are for fun. The local news media even those who write for our newspaper. . .the one that has been serving the city since the late 1800s have a hard time understanding the geography of St. Paul and the names of our neighborhoods so they re-name parts of the city to make things easier for themselves and at the same time they show us St. Paul natives that they are not from our beloved city.

There is no “East Saint Paul” — the name was given to the East side of St. Paul by the news media at some point in the 1980’s and some people who didn’t know any better started calling the east side “East Saint Paul”. There is a West St. Paul and a North Saint Paul and a South St. Paul. They are not part of St. Paul — they are separate cities. They even have their own mayors.

Over the weekend when there was a water main break and one of the local news papers actually referred to the “Lower West End” in a news story. There is no lower west end! My neighbors are most upset. They have not yet lit their torches and chased anyone out of town but it could still happen.

There is no such place as St. Paul – Minneapolis or Minneapolis – St. Paul but that is the subject of a future rant. You can call them the twin cities but they are not identical twins and they are two separate cities.

If you write for our local paper or talk about St. Paul on the local TV news stations or on the radio please print this and post it in your news room and stop renaming parts of the city and greater metro area.

Image: Map of the world