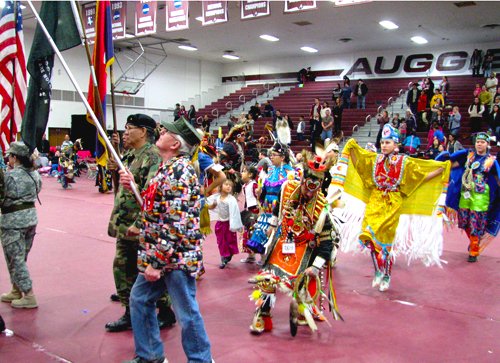 The afternoon Grand Entry at the 7th Annual Augsburg Traditional Powwow in Minneapolis on March 28. Veterans hold a special place in Native American culture, often leading the Color Guard before the dancers. (Photo by Deanna StandingCloud)

World champion jingle dress dancer Willow Abramson (Shoshone-Bannock) faced difficult challenges in her life. In 2005, she and her family were involved in a car crash; her baby daughter and husband did not survive. She found healing in dancing.

It’s officially Powwow Season in Indian Country! The anticipation and excitement dancers and singers built up throughout the winter months will be unleashed within many traditional and contest powwows throughout the country this year. Indigenous people have always gathered to celebrate and heal through song and dance. What has evolved is our contemporary powwow, the opportunity to share culture across various tribes.

Taking part in the powwow circuit can create connections for lifelong friendships, as dancers and singers alike. Frankie Graves (Leech Lake Ojibwe) has been involved with powwows since he was a young child. Graves has been a Grass Dancer, singer, Arena Director and even a master of ceremonies at various powwows across the Midwest. He shares his experience with the powwow culture, “So many beautiful Nations come together in the summertime, almost creating one large nation, like a big family.”

There are hundreds of different tribal nations, all with very unique dances including the Hoop Dance from the Southwest region, the Chicken Dance from the western tribes, or the Smoke Dances from the East Coast. Although only the primary dance styles are highlighted here, it is important to keep in mind these dances all originated with teachings and stories.

The Fancy Shawl dance is the most recent edition to the powwow scene, which appeared around the 1950s. Women used their shawls, which looks similar to how a butterfly moves about. The fancy shawl dance is a hybrid adaption of various tribal dances. Their moves are often large and the footwork is a complicated bounce, as women move lightly across the arena.

Like Northern Traditional, Southern style has buckskin, velvet or other cloth dresses. However, beadwork is only used as an accent. Southern style Women’s Traditional dancers do not stay along the perimeter, but gracefully step throughout the arena.

The Jingle Dress dance is considered a newer dance. There are different stories that come with its creation. In one story, a young Ojibwe girl became very ill. Her grandfather had a dream about a dress with these jingles all around the dress, which gave the whooshing sound, like the sound of the creation of the universe.

In the dream, the young girl was to wear the dress and become healed. The story goes that the young girl was too sick to dance, so she was carried around the circle and was healed. The jingle dress since then was introduced to other tribes and spread into the powwow circuit. The Jingle Dress is considered to be a powerful medicine and women who take on the dance style are to be very respectful.

Tin cones are sewn around the dress, often 365 of them representing every day of the year. Women often dance in small foot moves, in a zig-zag pattern, creating a specific rhythmic sound with their jingles.

The newest edition to the powwow, Men’s Fancy Dancers were at first considered clowns. Like Women’s Fancy, this style of dance was an adaption of various tribal dances. Men’s Fancy Dancers use incredible bright and bold colors with their fast movements. Often using high jumps and fast beats, fancy dancers wear two large bustles and two smaller ones on their arms made of ribbon, yarn or hackle feathers creating a streaming movement look to compliment dancing.

Also known as Straight Dancing, Southern style Traditional Men’s Dancers do not wear a bussel and their movements are more concentrated compared to the Northern Men’s style.

Originating from the Omaha Warrior Society, the Grass Dance began as a victory dance and has since evolved. Outfits have ribbon or yarn fringes somewhat resembling grasses flowing in the wind. Dance moves are symmetrical, as dancers create movements in one direction to be duplicated with the other side.