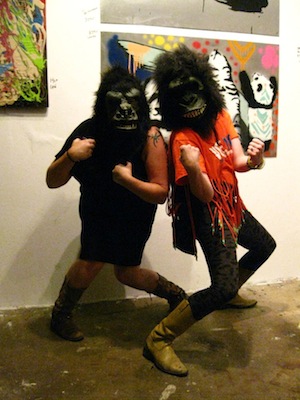 CORRECTED 10/3/2012: Joan Vorderbruggen, who founded Artists in Storefronts, a project that turns empty storefronts into works of art, was seething one day about the upcoming election and the two amendments that aim to limit marriage to only heterosexual couples and to require voters to show government-issued photo IDs. She began thinking about public art and its role in creating change. Then, she hit on an inspiration: the Guerrilla Girls, she thought. They would be the ultimate public art activists to speak to these issues we’re facing. (Disclosure: I have been an artist in Artists in Storefronts, and I donated to the Guerrilla Girls campaign.)

Vorderbruggen sent the Guerrilla Girls an email through their website describing the two amendments we are facing this November. “I never in a million years thought they’d actually get back to me, so when I got a voicemail from Frida Kahlo a week later I just about fell off my chair,” she said.

No, not the Frida Kahlo, of course. The person Vonderbruggen was talking to has a pseudonym taken from the famous Mexican painter. The Guerilla Girls have maintained their anonymity by all going by pseudonyms, and doing public appearances dressed in gorilla masks.

Though she’s concerned about both amendments, Vorderbruggen thought it would be wise to give the Guerrilla Girls a choice between the two for their billboards. Initially, they said they would like to speak to both amendments, although as they began to develop the image, they ended up focusing mainly on the marriage amendment. “Kahlo” said there may be a possibility of doing something with the other amendment too—perhaps an additional smaller poster that can be distributed.

To make the project happen, Vorderbruggen partnered with Cult Status Gallery. The owner of Cult Status, visual artist Erin Sayer, said that the marriage amendment fight is very important to her. “So many of my friends can’t get married because it’s not legal,” she said. She read Vorderbruggen’s initial post on Facebook, saying she wanted to get the Guerrilla Girls to do a billboard, and immediately reached out to Vonderbruggen, saying she should have a fundraiser at the gallery.

Sayer was also concerned with the voter ID issue. “This world has become so intrusive on our lives,” she said. “It’s great to have art intersected with activism in a perfect marriage.”

The fundraiser was held on August 11, and included a silent auction with art donated by local artists including members of WARM. They made about $2,000 at the fundraiser, with more donations made through an Internet campaign. 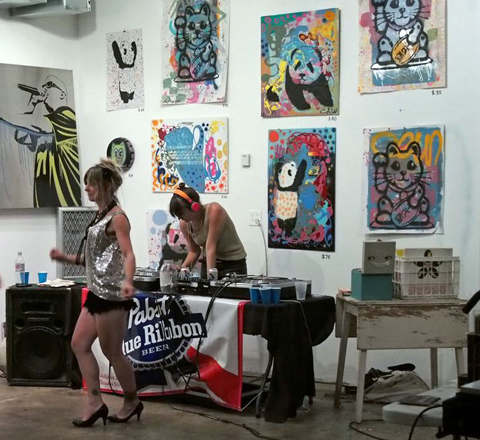 Renting a billboard: Not as easy as you’d think

The process of actually renting a billboard was rather complex, with some roadblocks along the way. The number one problem was Clear Channel Outdoor, a subsidiary of Clear Channel Communications, which has a significant presence in the market.

According to an article by G.R. Anderson Jr. in City Pages from 2005, Clear Channel arrived in the Twin Cities in 1999, and by the time of the article owned 80 percent of the billboards in St. Paul, for example. When I contacted Clear Channel Outdoor to find out what percentage of the Twin Cities market they own today, they declined to comment. Jim Cullinan, vice president of marketing and communications, said, “We obviously have a significant presence in the Minneapolis-St. Paul area. Besides that, we don’t particularly comment.”

Clear Channel Communications is also known as a conservative-leaning corporation. The owner of virtually all of the conservative talk radio stations, they have since 2008 been owned by CC Media Holdings, a corporation formed by a private equity group formed by none other than Bain Capital Partners, LLC and Thomas H. Lee Partners, L.P. In 2010, Clear Channel Outdoor rejected two billboards promoting the St. Petersberg Pride Parade in Florida, according to a news station from the area.

When Vorderbruggen first contacted Clear Channel, they seemed fairly receptive. She told them that she was looking to create a billboard public art promotion running four to six weeks in the month of October, and they responded that as the project was art-related there would be deeply discounted rates.

Then, when Vorderbruggen mentioned that the billboard would be political in nature, aimed at defeating the marriage and voter-ID amendments, she was told that Clear Channel has a corporate policy that all politically related advertising be purchased off the “common rate” card. The price suddenly went up from $2,700 a month to $7,000 for a month.

“Their political rates are so inflated it excludes participation by most grassroots organizations,” Vorderbruggen says.

When I inquired with Clear Channel Outdoor’s media relations, Cullinan said in a voicemail that Clear Channel’s political pricing is “all about fair access, and allowing anyone to have access.” In response to a question about whether billboards that promote anti-abortion messages are subject to political pricing, Cullinan responded via voicemail that policy discussions don’t fall under the same umbrella, “so that’s just negotiated space.”

Luckily, the project ended up landing a much better deal with CBS media: for $2,400, half of what the company would normally charge ($4,500 for 4 weeks). A similar deal with Clear Channel would cost closer to $7,000, according to Vorderbruggen. The billboard will be 48′ x 14’, on the entrance ramp onto 394 from Downtown Minneapolis.

I’ve seen the image; though I’ve been asked not to discuss its nature until the billboard goes up, I can say that it’s sure to get some attention. As a precaution, Vorderbruggen has sought legal advice. The billboard will state that it’s been paid for by Artists in Storefronts, Cult Status Gallery, and fellow concerned Minnesotans. 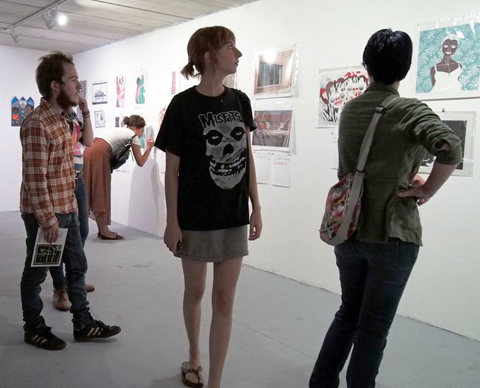 Pressure from anti-amendment groups to stay on message

Even though the image hasn’t been released publicly yet, Vorderbruggen says they’ve experienced some pressure from other groups that oppose the amendment. “There has been some concern voiced by organizers working on the marriage amendment regarding the image that will be used,” she said. “I allowed them to contact Frida via email, but I wasn’t surprised when she basically responded that although she appreciated receiving as much information as possible, the Guerrilla Girls weren’t planning on censoring any of their ideas based on it.” According to Vorderbruggen, a representative from Minnesotans United for All Families as well as Minnesota Citizens for the Arts have requested information about what the image was. Kelly Schwinghammer, director of communications and research at Minnesota United, could not be reached by press time for this article.

Sheila Smith, from Minnesota Citizens of the Arts, said, “We were contacting to find out if they wanted to know what our messaging strategy is. The Guerrilla Girls are very independent, and they’re going to do what they want to do. We did have a little bit of conversation, but it was no big deal.” Frida Kahlo said the group has been quite busy this year with the coming election. For instance, they are doing a project in Washington D.C. that involves “an estrogen bomb poster,” she says.

About the poster the Guerrilla Girls have designed for Artists in Storefronts, Kahlo said, “It’s going to cause a lot of people to talk.”

A lot of what the Guerrilla Girls do is outreach. “We don’t function in the art world the way other artists do, finding galleries and rich people to buy their work,” she said. “We are a different breed of artists. We’re culture jammers. We are about empowering.”

For years, the Guerrilla Girls, a group that formed in 1985 in response to the lack of representation in art museums of women and people of color, have been kept alive as a group by selling books and posters. “It would be easier to sell paintings,” Kahlo said. Instead they make a lot of small exchanges, and have never been represented by a gallery. “For too long the art establishment is run by the one percent. We want to present an alternative to that.”

They’ve had a website since 1996, and a lot of what the Guerrilla Girls do is networking, traveling all over the world to do presentations and workshops. Recently, they’ve been doing more special projects like the Artists in Storefronts project.

They first created a billboard about a decade ago, Kahlo said, and they’ve created various billboards and banners in Hollywood, Venice, Istanbul, Montreal, etc. They’ve also, along the way, been shown in museums, such as the Walker Art Center, which currently is exhibiting one of their pieces in an exhibit on the 1980s. The fact that museums are now showing their work, she said, means they “are doing something right.”

“We are offering an alternative to the establishment,” she said. “In our own way, we have affected history.”

The idea they came up with for the poster pertains to the marriage amendment. “It’s unbelievable how many states have passed marriage amendment legislation. We were shocked.” The Guerilla Girls wanted to encourage Minnesota to reject that, “to stop that tendency and trend, and stand for its liberal history.”

While Kahlo declined to say how many members Guerrilla Girls has, she said they are smaller in number than you might think, although many members weigh in on projects. “It is a group effort,” she says.

They’ve certainly had their share of controversy over the years. There was the famous Get Naked poster, which was originally rejected by the Public Art Fund in New York, ostensibly because the issue was not clear enough, but Kahlo said because the agency “didn’t want to criticize the major New York institutions.” They also almost lost a grant from the National Endowment for the Arts when the George H.W. Bush White House tried to block it.

Kahlo said they can’t wait to see the poster up, and to see see how voters respond. “For sure we support gay marriage,” she said. “For us it’s a civil rights issue. If [the billboard] is controversial, we are ready for it. We hope it engenders discussion.”

In terms of gay marriage, she believes “we are on the right side of history. Those who oppose it will be a little embarrassed.”

They also don’t believe in Voter ID, which they believe is voter suppression. “It’s another way to limit our democracy,” she said. “The small instances of voter fraud don’t in any way require the kind of laws that are trying to be passed that make it difficult for average people to vote.”

While the billboard is going to be about the marriage amendment, Kahlo said “that doesn’t mean the other issues isn’t as important.” There is also a possibility that they will design an additional poster that can be distributed.

Kahlo said they hope to come to Minneapolis to see the billboard, and are currently looking for a school or organization to bring them in for a workshop.