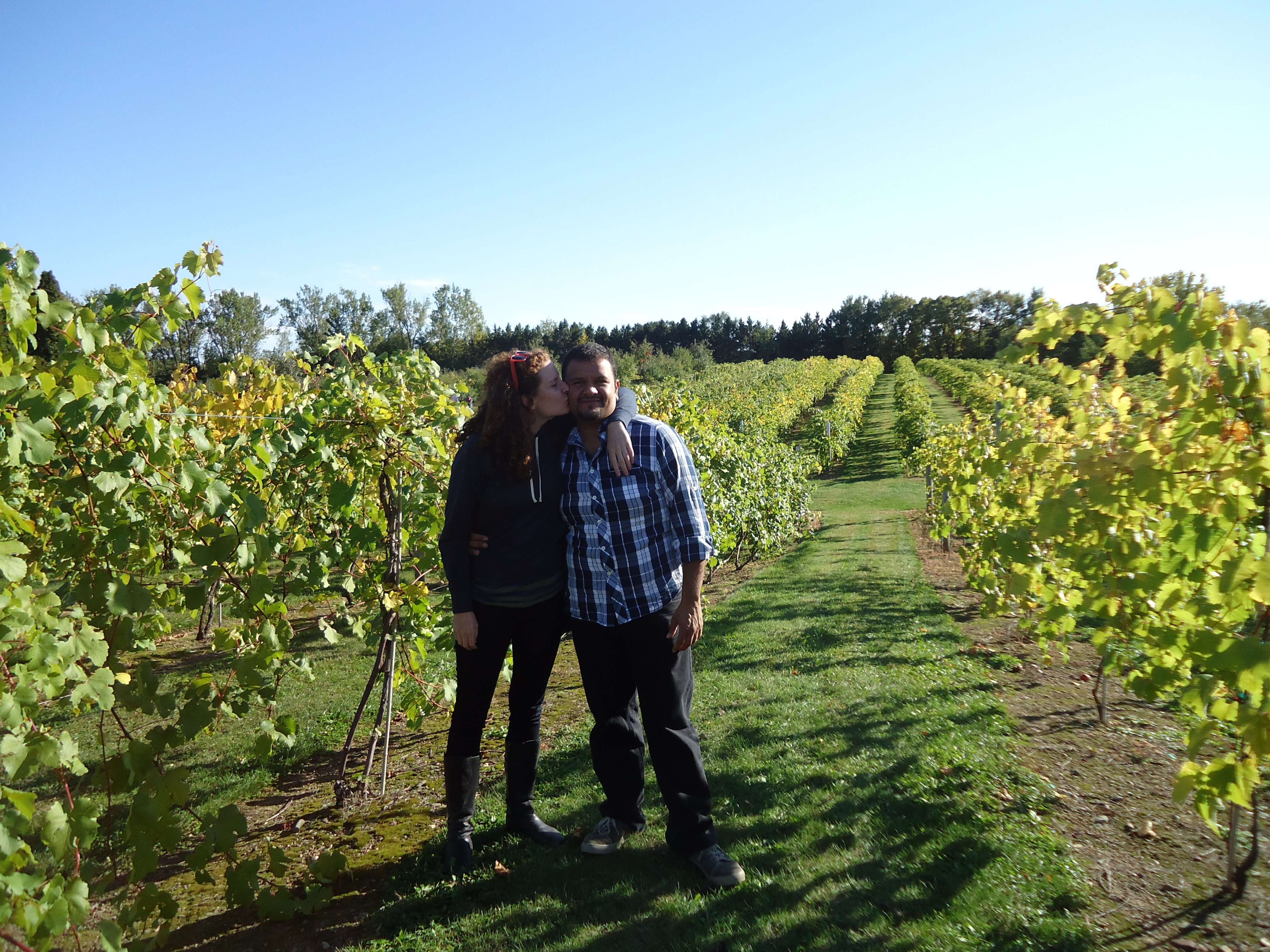 Kate and Carlos at an Apple Orchard in Minnesota

I am originally from Minneapolis, but have been living and working for a non-profit called Somos Hermanos in Guatemala for the past five years . This is the story of how my Guatemalan partner and I decided to apply for a tourist visa so he could travel to Minnesota and meet my family. Originally, this was an e-mail sent to all of our loved ones.

About a month ago Carlos surprised me and let me know that he intended on applying for a visa so he could join me on my visit to Minneapolis in a few weeks. I wanted to share our personal visa process with you because not only was it important to us personally, but also to show a perspective that is rarely available in regards getting legal permission to visit the country we live in.

We spent about 3 weeks gathering paper work in Quetzalteango, Guatemala so that we could fill out the online tourist visa application. This meant long lines at super slow and bureaucratic government offices, long lines at the bank, and lots of brainstorming of which documents would help Carlos’ case. We had to prove that A) Carlos had the funds to go and B) he had enough ties here in Guatemala to make sure he wouldn’t over stay his visa in the States.

Eventually we thought we had enough information to fill out the online application. It took us 6 hours (this with me, a native English speaker), two trips to the bank, $150 and many stressful moments because we knew every answer was crucial. Finally we filled it out and got the date for the interview in Guatemala City for a week later.

We spent that week trying to gather even more paper work to show at the interview (No, I don’t think bringing samples of your bread is a good idea), speculating at what they would ask, which would be the best answers, and imagining the process so that the day of we would be prepared. It was horrible. Each person we knew who went through the process had a different tip, some of which contradicted each other (You should bring Kate! Whatever you do, don’t bring Kate). All of the questions, ideas, doubts were constantly bouncing around in our heads and every night one of us would wake up at some point with a new idea of paper work or doubts on how we filled out the application. Meanwhile, Carlos is prepping everything so that his businesses continue to run while he is gone.

Finally we took the 4 hour bus ride through the mountains and rain to the capital for our interview the next day at 8:30am. Luckily Carlos’ mom, Dona Irma, lives in Guatemala City so we were able to save money by staying with her. At 6:00am the next day we got up extremely nervous. Carlos’ Mom and brother spent the morning criticizing his choice of shoes, the shirt he decided to wear, and his hair cut. We have our 10 pound envelope filled with proof of everything Carlos has done in his life including his participation in the Slow Food movement, news articles from when his business opened, and even a copy of his restaurant’s menu, knowing full well that often times they don’t even look at your paperwork. Finally we got in the car with Dona Irma so she could drop us off at the U.S. Embassy.

As we are weaving in and out of the craziest traffic I’ve ever seen, Carlos’ mom has the radio on to a evangelical preacher radio station which Carlos keeps turning down and she keeps turning up. Then Carlos’ sister calls and Dona Irma starts talking on the phone. I see him start to pinch certain acupuncture points for stress and I’m gasping every other minute as I almost see us run over every poor motorcyclist as we cut them off. There is so much traffic that it is 8:15am and in between talking on the phone and turning up the radio, Dona Irma keeps telling us that we should be in line by now and that we are going to miss the appointment. Suddenly I don’t care about the appointment and I just want to make it there alive.

The ride from hell eventually ends with Dona Irma sending us with God, Carlos goes in to the embassy, and I take a seat outside along with 75 other people and try to relax. I watch everyone walk out of the embassy one by one, most of which are crying, either for happiness or out of frustration and sadness. I see all of the family members eagerly awaiting their loved one’s and everyone is speculating about the things that help or harm your case. Families are dressed up like they are going to a wedding, and occasionally you see indigenous folks wearing their most sacred traditional clothing. I try not to cry each time someone comes out and shake their head before hugging their family member. I also try not to cry when I see people come out with joy in their face and run and jump into their loved one’s arms with happiness of getting the visa. The power of the visa, the opportunity to go to the states and what it means for so many people feels so incredibly absurd it makes me want to run, yell and cry at the same time. I imagine Carlos’ face and how I will react when he tells me he didn’t get it. I know he will be frustrated, discouraged, and concerned for what this means for our relationship. I keep telling myself that I won’t cry, that I will be understanding and that Minneapolis is cold that time of the year anyway.

Later I found out that where Carlos was waiting, all of the interviews are on a speaker phone . For three hours he listened to all of the questions, the answers and results of each interview. Additionally, they were testing their security system so that every 15 minutes an alarm would go off and a man’s voice would say, in English, “step away from the windows! Step away from the windows!”, everyone would tense up, due to English not being included in the 23 languages spoken in the country, and then “this is just a drill, this is just a drill”.

After an agonizing period of time, I see Carlos walk down the stairs, come out of the security gate and look at me. I can’t tell by his face what happened and he says “Let’s go, let’s get out of here”. I’m walking behind him wondering what that means in regards to his visa when he looks back and winks at me. We walk in silence into a cafe where he orders a coffee and I, a beer.

As I turn to go to the bathroom, he tells me, “They’ll send me my passport with the visa in 3 days.” I give him a hug and call him an asshole for making me wait, and then I go into the bathroom and sob.

His interview lasted 2 minutes. He got a nice looking older lady who asked him why he was going to the States. As we had prepped, he took advantage of the opportunity to self advocate and handed her the letter of invitation I wrote. She read every wors of it, and due to the month it took me to write it, it gave her a lot of the info she needed about his life and investment in his community. Then she said, “Minneapolis, wow. And it says you have two restaurants?” Again, Carlos took full advantage and handed her all of the bank statements, patents, proof of ownership and official tax documents. She opened the packet from the back, and looked at the page where we had glued his business cards and publicity onto a blank page 11:00pm the night before. “Yum, Bagels…I’m hungry!” she said with a smile. She asked a few more things about his work, his mom’s visa, and then turned to the computer. “You passport will be mailed to you in 3 days with your visa Mr. Valdez”. Carlos said thank you and left.

I still can’t quite believe this is happening, but Carlos will be coming with me on the flight in October. We feel so lucky, to have gotten that hungry lady in a good mood, that Carlos is good at seducing people with talk of bread, to have brought the right things, to have the means to fill out the application, to pay, to travel, take time off from work, etc. While going through so many emotions, I can only think what this means to me, to him, and for our relationship, and how our case is fairly trivial in comparison to those who want the visa to meet their mom for the first time, to see their children, to get medical treatment or say goodbye to a loved one who is passing away.

I can’t begin to imagine how tolling the process is on them.

It was important for me to share our story with you to remind ourselves of how insanely privileged we are to have documents to this particular country. I never thought seeing Carlos in Minneapolis would become a reality, and thanks to his bagels, we will be biking through the fall leaves and picking apples in two weeks time.