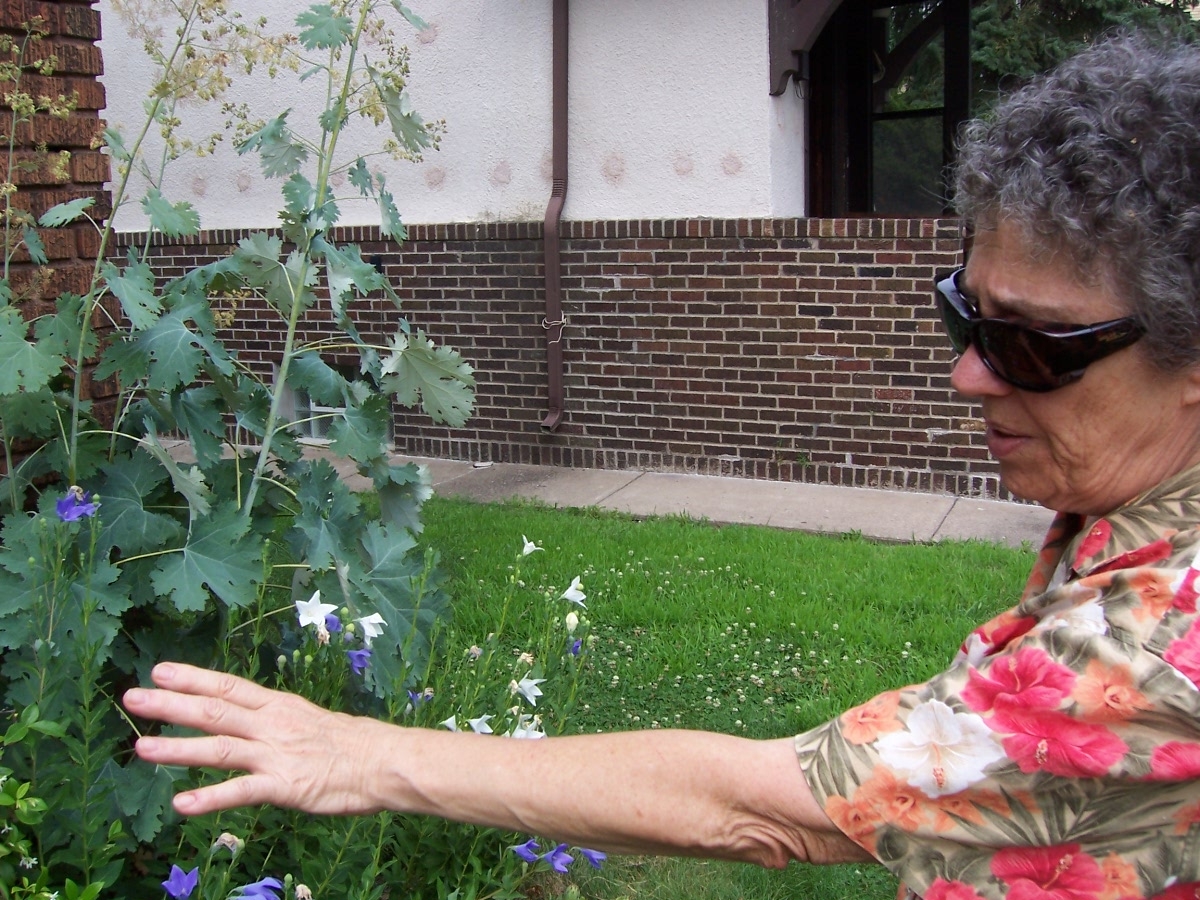 Diane shows off one of her many gardens.

I meet Diane on a hot July morning and we walk together to a nearby bus stop. Diane has suggested that we attend Chalchiutlicue, an Environmental Justice Summit and Ceremony in West St. Paul, and do our interview on the bus, en route. I agree, and we are off. As the day progresses, I realize that this suggestion in many ways epitomizes Diane’s style—active, engaged in the community, and adventurous. Throughout the day, both inside of the conference and waiting at various bus stops, we run into her old friends and converse with new ones. “Much of the time, I like to connect people and then just get out of the way,” Diane laughs, “It’s all about building trusting relationships. I don’t know any of a better way to make change in the world. That’s what keeps me going.”

Throughout her life, Diane has been involved in numerous community projects across the state. In her retirement, she serves as a Master Gardener with Ramsey County Extension, gardens and manages the bee hives in the Midway Green Spirit Community Garden, is an appointee to the St. Paul/Ramsey County Food and Nutrition Commission, and works with the Growing Food and Justice for All Initiative. I was blown away by just how involved Diane remains—especially when she explained that she had surgery on her hip last winter and lives a car-free life. After listening to her talk about her passion for gardening and creating just, inclusive food systems, I started to recognize an inner drive and resourcefulness that have accompanied Diane throughout her life.

Diane was born in a working-class neighborhood in Duluth. Growing up during World War II she saw differences in the way people thought about and procured food. “You couldn’t go to the store and buy anything,” she recalled. “For one thing it just wasn’t there. Then there was rationing. I remember playing with ration tokens on the floor.” Her first gardens were victory gardens and her first teachers were her grandmothers, both avid gardeners and food preservers themselves. She remembers learning by helping her family members, an education woven into the daily rhythm of gardening, cooking, and eating.

After high school, Diane moved to Minneapolis to attend the University of Minnesota. “I didn’t get my bachelor’s degree,” she explains, “instead I got my MRS.” “What’s that?” I ask. “I got married,” she laughs. She and her husband moved around as newlyweds, starting a family and growing food wherever they could. As a resident of the Seward neighborhood in Minneapolis in the 1960s, she was involved in the cooperative movement, organizing and working to start what is now the Seward Food Co-op.

In the 1970s, with a growing family and the desire to be more self-sufficient, Diane and her family bought 80 acres of land near Chippewa State Park in Northern Minnesota for $15 an acre. They moved there to hunt, gather, and grow their own food. “ I realized that it is possible to grow, hunt, and find most of your own food if you are willing to put in a lot of work,” she said. Along with a group of friends who accompanied them on the acreage, Diane continued to live the back-to-the-land life with her husband and four children for more than a decade.

Eventually, the group dispersed and Diane found herself in the Twin Cities once more. She worked much of her career as a clerk—first for the United States Postal Service, then for the St. Paul Public Library System. Throughout this time, she continued planting and tending to her own urban gardens, becoming increasingly involved with local food justice issues.

Diane recalls that at first the meetings, presentations, and initiatives she attended relating to food security did not necessarily represent the voices and experiences of diverse communities. Instead, they were heavily attended by white academics. The urban neighborhoods where she lived and worked included people from many different ethnic and socioeconomic backgrounds. Why, she wondered, weren’t they involved in conversations over access to healthy, local foods? “The more I thought about it,” she recalls, “the more I wanted to change things.”

Joining up with group of like-minded activists, Diane helped form the Growing Food and Justice for All Initiative. This group, with fiscal sponsorship of the Milwaukee-based organization Growing Power, considers dismantling racism and empowering people of color as key to creating an equitable food system. It hosts annual gatherings and trainings to support people doing similar work in different parts of the country. Diane explains with pride that their mission is to affirm that, “all people, at all times, have the right to fresh, affordable, culturally acceptable, sustainable food raised in a socially-just manner.”

I asked Diane to elaborate upon how she understands the relationship between growing food and dismantling racism; “For me, gardening is a metaphor for life. It makes me feel a connection to the earth and the way a flourishing ecosystem is always diverse and balanced,” she said. “It’s very nurturing.” Diane loves to work with people in the garden, not only so that they too can realize their connection to the planet, but also so that they can build connections with one another. She continued, “I’ve had the unique opportunity to develop trusting relationships with people who are different than I am. It’s been one of the most affirming things in my life.”

When she is not working to improve access to healthy local foods through policies, trainings, and community initiatives, Diane can be found in the garden. Her favorite things to grow are garlic, sweet potatoes, and edible “weeds” that spring up and just need to be harvested. Her favorite local food to eat is stinging nettle— “Just wear some gloves and pick the small growing tips in early spring. Rinse them three times, then steam them until they wilt and add a little bit of butter.”

Is there an inspiring gardener in your life? Or a gardening story? Tell us about them in the comment section (or write an article!)