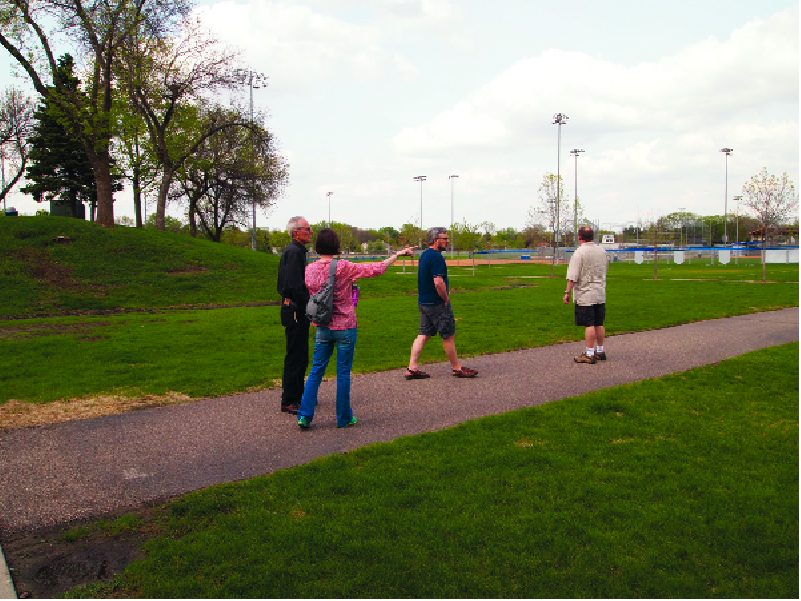 May 18, the Citizens for Sustainability looked at potential garden spots. (Photos by Margo Ashmore)

Whether it’s challenging each other to see “how low you can go” with the home thermostat in February, or looking at swaths of public turf grass for their potential to hold community vegetable gardens, sustainability and Transition Town groups are popping up all over.

Jon Freise, a national trainer on the subject, told a recent gathering that the Transition Towns movement came out of concerns about three things: Climate change—temperature extremes brought on by pollution, “peak oil”—fossil fuels running out, and economic instability.

There are many things individuals can do to immediately decrease fossil fuel use and in many cases, save money. There are also macro, policy level things that could be done, but these groups admit those changes will take a lot of elapsed time and perhaps a few more crises. “Transition” refers to transitioning “from oil dependency to local resilience,” says Rob Hopkins, founder of the Transition movement.

Sustainability groups, instead of being “apocalyptic,” in the words of one organizer, strive to build a sense of community and hope for an improved quality of life. They do it by both informing individual change and, in some groups, encouraging public officials to pursue broader policy changes or specific infrastructure changes. Freise said Milwaukee Avenue in South Minneapolis is a perfect example. Taking out a street there and making a pedestrian mall raised the standard of living and made it more pleasant, “rather than misery, sadness or deprivation.”

One of the newest groups, Citizens for Sustainability (CFS), meets at St. Anthony Village City Council Chambers monthly on Saturdays from 3-5 p.m. At their May 18 meeting, they heard from a consultant who has extensive food gardens in her yard, met in subject-related groups for a while, then shared what they’d discussed. At the end, they strolled the grounds at the community center and looked at a site they may request for a garden.

The next CFS meeting is Saturday, June 15, a CFS Forum featuring several members presenting individual interests and initiatives. Saturday, July 13 will feature open discussion and planning of activities for fall, in conjunction with University of Minnesota professor Dave Wanberg and students enrolled in his sustainability class. Clifton Ware, a U of M music professor emeritus, organized and facilitates the group. Contact: warex001@umn.edu. Website: stanthonyvillage.wordpress.com

Tim Jordan from the Northeast Minneapolis Transition Town group shows up at Diamonds Coffee Shop on Tuesday mornings 8:30 a.m. to greet potential new participants checking it out. (He noted he’ll be absent June 11 and 18.) Jordan describes the group, with three to four regulars, as still in the “mulling” stage, early thinking after more than a year.

Some of those who’ve met in the Northeast group have decided to put their energies toward specific outcomes; Jordan is interested in building furnaces that use wood scrap, Peter Doughty has put his focus on local food resource hubs, for example. 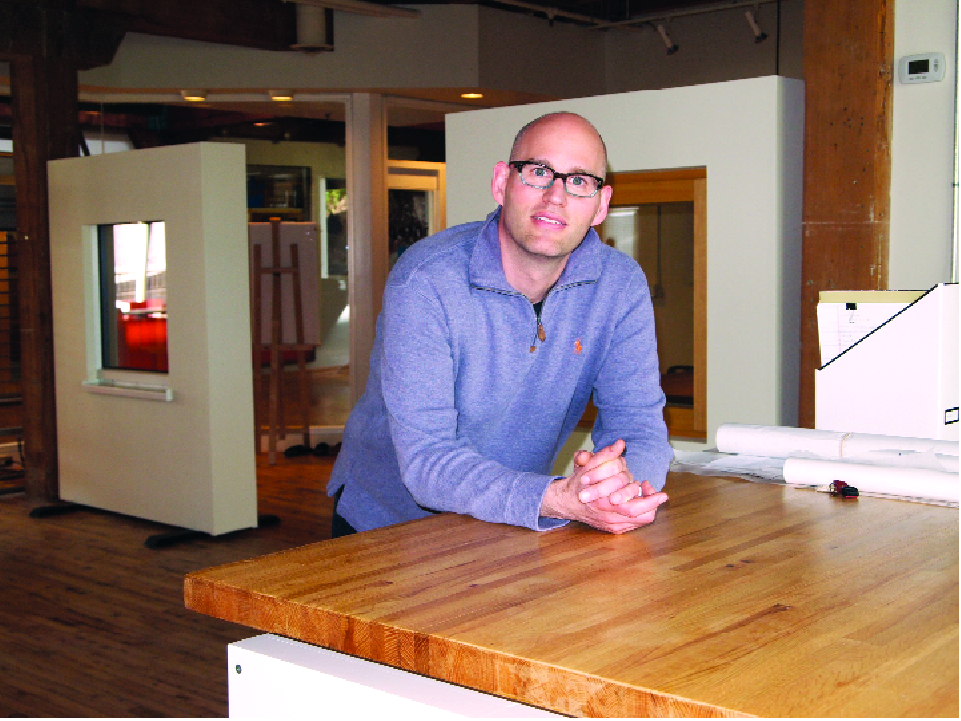 Northeast resident architect Tim Eian (right) is an expert in building “passive house” homes designed, situated and built such that on most days there’s no energy spent, and on the worst cold days they could be heated with the equivalent of three hair dryers. He has spoken to several Twin Cities sustainability groups about his work, and has these observations about their structure and focus:

“The above-60 age bracket are the leaders. They may instigate but they won’t see it,” the full transition, in their lifetime. “I don’t see as many young people as would be appropriate, though there are some gung-ho college kids. Those who would be the economic engine are missing,” people who have young families, two jobs, and not much time to think about these things.

Leslie Mackenzie and Peter Foster of Longfellow neighborhood are a little younger than 60, but took up the sustainability focus as their last of five children left home and they decided to take on college students as roommates. Coincidentally, Leslie left a corporate job and completed the urban farming program at the Permaculture Research Institute for Cold Climate.They blog about their experiences at thinkofitasanadventure.com

Perhaps Eian’s family would be an exception that proves the rule: As their two kids got to the ages where both parents had to bring them in opposite directions for school and activities, a second car was necessary. But until then, even the first car, a hybrid thoughtfully purchased when the previous car expired, didn’t get much use, between walking, biking and bus for work, errands and outings. A list of the family’s other energy and environment-conscious choices accompanies this article.

European countries are more population-dense and have had to deal with energy and environment issues sooner for various reasons. Eian was born and raised in Germany, where the passive house is the building standard.

Tim Eian said, “in the last election energy independence came to mean it’s okay to import from Canada and maybe Mexico,” just not other places. “My idea would be to disconnect from” fossil fuels. “So under the hood, nothing has changed” in the U.S. where it has in many European countries. “And we have more poverty than they do.”

For links to other Transition Town groups in the Twin Cities, see the www.transitiontc.org website. Tim Eian’s website is www.testudio.com.

People don’t need to go to meetings to start making these types of changes in personal/family lifestyle. Here’s what Tim Eian’s family has done: