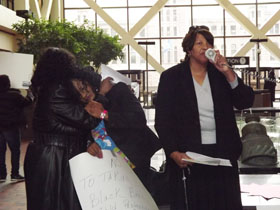 3524: Dorothy Dunning (center) is consoled by Willie Mae Demmings (left) as Hattie Bond addresses Dunning's supporters during a rally at the Hennepin County Courthouse. Dunning is fighting to get her grandchildren out of the state's foster care system.

Even though the Minnesota Supreme Court ruled against her, Dorothy Dunning is fighting on in her quest to gain custody of her granddaughters.

Dunning has been in a nearly three-year battle to get her granddaughters, Princess Knox, 3, and Dorothy Knox, 2, out of the foster care system and away from their foster parents, Steven and Liv Grosser. The Knox girls were placed in the Hennepin County foster care system when their parents – both battling substance abuse at the time – relinquished their parental rights. Dunning, the girls’ paternal grandmother, has been certified fit to care for her two grandchildren. The children are African-American. The foster family, the Grossers, are white.

Last month, the Minnesota Supreme Court ruled 5-2 against Dunning and thus, the girls remain in the custody of the Grossers, who say they plan to permanently adopt the sisters. But despite the fact that the state’s highest court ruled against Dunning, she has vowed to fight on and is pushing for legislative change in how children are cared for once parental rights have been terminated.

“I’m willing to take care of my grandchildren for free, and the state of Minnesota is charging you (tax payers) to take care on my grandbabies,” said Dunning, during a protest rally inside the atrium of the Hennepin County Courthouse in downtown Minneapolis

Dunning claims the state is paying $1,400 a week to care for her grandchildren, including hiring a nanny for the Grossers.

“Why would you (tax payers) pay somebody $1,400 a week and I don’t want a dime,” asked Dunning. “This is what you should be appalled about; it’s about your money.”

Dunning has vowed to take her fight beyond the reach of Minnesota and is set to travel to Washington, D.C. to meet with legislators from Minnesota and her home state of Mississippi. Members of the National Action Network, a civil rights advocacy organization, will accompany Dunning.

Lennox Abrigo of the D.C. branch of the National Action Network is calling on the United States Congress to intervene on Dunning’s behalf.

“Not only do we need a change of heart, we need a change in legislation,” said Abrigo. “These rallies will continue until Mrs. Dunning gets her (grand) children. Those who took them must return them. The problem is the hearts of (Minnesota) government officials are as cold as the weather in Minnesota.”

“Minnesotans call it Minnesota Nice; actually it’s Minnesota Ice,” said Seals when talking about the state’s foster care system. “Minnesota is more racist than Mississippi, Texas and Alabama all put together. They are snatching up our babies. White folks are getting rich raising our children.”

Hattie Bond, who spoke during the 30-minute rally, said what is happening with the placement of African-American children in the foster care system is akin to the slave trade.

“It’s important to keep African-American families together,” said Bond. “We are human beings. We are not puppies; we are not cattle.”

Dunning said for her this issue is not merely about race; it is about family. “It’s not a Black or white thing, it’s about a grandmother who loves her grandchildren,” said Dunning.