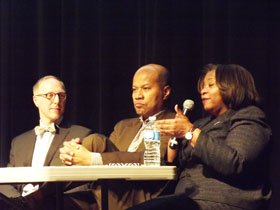 All around Minneapolis proof of the economic boon can be seen with the recently developed or under development commercial and residential sites – everywhere except north Minneapolis.

The new Vikings stadium is taking shape nicely, transforming the downtown landscape. Over the past few years Uptown has become unrecognizable from its former self with a plethora of upscale multi-use commercial and residential buildings now dotting the area. Development is all around it seems, with the exception of north Minneapolis. Outside of the recently completed Minneapolis Public Schools (MPS) headquarters on West Broadway Avenue, development on the Northside has been stagnant … to put it mildly.

To drive down West Broadway in many ways looks like a trip back to the 1960s or 1970s but there seems to be a renewed interest in developing north Minneapolis and West Broadway in particular. An Anytime Fitness now resides on West Broadway near Penn Avenue and within the past month a new standalone Walgreen’s has replaced its unkempt older store at the corner of West Broadway and Lyndale Avenues. Now there is news that come summer of next year, just a couple of blocks from the Walgreen’s, a blighted building that once housed a two-story Lincoln dealership and later a used furniture store will be transformed into the new home of the West Broadway Education and Career Center.

The massive 47,000 sq. ft. building located at 800 West Broadway Ave. has long been the discussion of redevelopment but has remained vacant for years. Now construction on the building is scheduled to commence this June.

The West Broadway Education and Career Center will be home to a unique set of tenants who are joining forces in hopes of providing solutions to residents and an area facing a myriad of issues. The Minnesota Department of Employment and Economic Development (DEED), along with MPS, Minneapolis Community and Technical College (MCTC), and NorthPoint Health & Wellness Center are not only going to occupy space in the building, but will work with one another in efforts to better serve north Minneapolis and its residents. The unique partnership will offer workforce training and resources, secondary and postsecondary education assistance and health services to area residents.

“When Gov. (Mark) Dayton put forth this initiative it wasn’t about a new building, it was about a better delivery model to help people to find employment within the community,” said Jeremy Hanson-Willis, the state’s deputy commissioner of workforce development. “It’s a new model to give people a pathway to a bigger and brighter future.”

With the new facility, aside from the hopeful dividends of providing better access to healthcare and offering various education opportunities, the project will provide immediate jobs in construction with many of those jobs being filled by residents of north Minneapolis. Sherman Associations is the lead contractor and the company’s president, George Sherman, said his company is working with Summit Academy OIC to boost minority and women hiring and it is breaking down subcontracting projects in smaller parcels to better accommodate smaller minority-owned and women-owned contractors who may not have the capitol resources to bid on larger projects.

Stella Whitney-West, CEO of NorthPoint Health & Wellness, agreed that the project is beneficial to the area in a multitude of ways.

“Not only are we healthcare providers, we’re also a major employer. We employ more than 400 people, many who are being offered a second chance in life,” said Whitney-West. “That’s something that this partnership represents.”

Hanson-Willis said the new workforce center is a dire need, not only for north Minneapolis, but for all of Minnesota.

“Right Now we don’t have enough workers for jobs, yet in north Minneapolis there are a lot of people who don’t have jobs,” said Hanson-Willis. “So in this community we have to get this right. We have to get people the right training and right skillsets. If we don’t get this right the entire economic structure of Minnesota is at stake.”