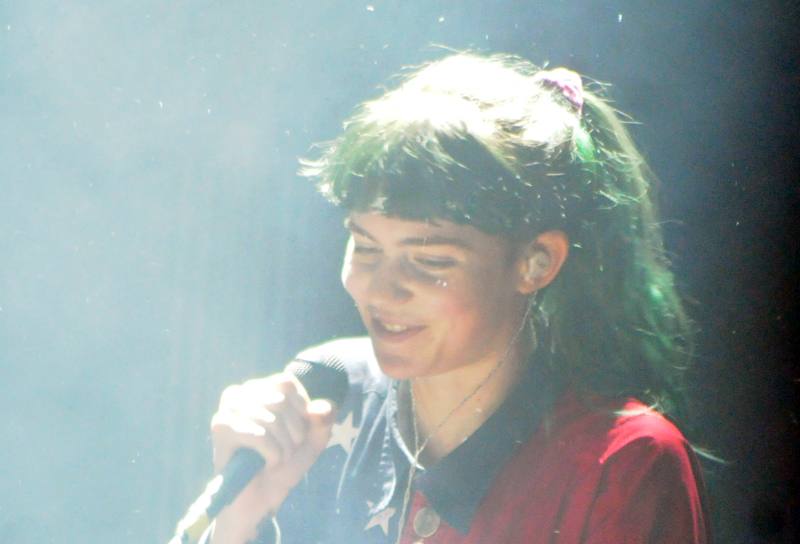 Okay. So. As I said in my recent Cadence Weapon review I’m a huge sucker for a lot of acts that have been coming out of Canada of late. I’m constantly enraptured with the likes of Born Gold, Slim Twig, Sean Nicholas Savage, and numerous others. That being said, it was no surprise that I thoroughly enjoyed myself at the sold out Grimes show on October 22 at the Varsity Theater. I departed from my abode with a Taylor Swift t-shirt and a handful of fake silk flower in hand (and, uh, backpack).

The first Canadians on the bill were the ghostly, powerful, and dark act that are Myths. They began the set not with a bang, but with a soft sort of lull that seemed directed to simply ease the crowd into the show. Lief Hall was sporting a mirrored pyramidal headdress with white fringes cascading off of it, while Quinne Rodgers wore a sparkly black jumpsuit. Gauze and flowers littered the stage in a manner that only added to the atmosphere of the event. After the soft lull of the first song, Myths began to tap into their punchy, punk-esque vocals backed by booming bass and disjointed synth rhythms. Myths are definitely not a band that everyone would enjoy. You’d have to appreciate the more noisenik side of things to truly enjoy Myths.

That said, they also have a certain kind of power about them that even a casual listener or viewer would be attracted to. When they screech and squeak and shout into the microphone, both Lief and Quinne hold themselves with a posture and attitude that is reminiscent of many rap artists. They lunge and dance and pounce across. One particularly enjoyable song of the set was “Deadlights” which comes off of their self-titled album. This dark and moody piece really set the tone of the whole show. The chorus especially was delivered with a lot of energy behind the words. This was not the first time Myths have ever taken a trip south to Minnesota, as they’ve played a private venue before. Definitely a show and a band worth checking out if you think you’re tough enough to stomach the girl power.

Why did I have a Taylor Swift t-shirt, you ask? Well, if you know much about the musical likes of Elite Gymnastics’ James Brooks, you know that he has a passion for a wide array of girl pop artists ranging from Tori Amos to Madonna and everything in between. He tweeted of his distress before the show in finding no Walmart in which to purchase a Taylor Swift shirt near the Varsity, so I figured, why not? The Canadian-born longtime Minneapolis resident, now residing in New York, has seen a shaky support in our local scene. Howler’s Jordan Gatesmith recently received a lot of slack for making a few negative comments about the music scene here, but it’s true that we face some issues. After discussion with artists, fans, and music professionals around town, I’ve found that the scene here is extremely supportive, but only if you fit into a certain niche. The niche doesn’t have clear guidelines and qualifying characters, but it definitely exists. I recently went to James’s free show at Macalester, and had the chance to talk to him afterwards about a lot of up-and-coming Canadians to whom he’s closely connected.

The moods between the Macalester show and the Varsity show were as different as night and day. The band of bros and their bro friends that opened for him at the Macalester show completely cleared the room once the bro band went off stage and left behind a few members of a subdued crowd who mostly looked they were only there because they had nothing better to do. The show that James put on was deeply sad, yet intimate. He included his “hits” so to speak, but also delved into some sadder songs, like a spoken word piece about a lonely drug dealer and a woman who was told by her god to be a prostitute.

The Varsity set was still emotionally-charged—but not on the electron side of things (you guys, I just made a science joke). Because of the higher freedom and tailoring that a larger show allows, James was able to decorate the stage like a Japanese garden. The fake flowers that were a part of Myths’ set were also strewn around for Elite Gymnastics’ set as well. A couple of Totoro plushies stood guard at the synths while James walked onto stage wearing a camouflage jacket with the Taylor Swift t-shirt that I brought for him. I was so dorky-happy. I just really love the entire feeling that accompanies all three of these bands. So many shows involve separate acts with bands that really couldn’t care less about who comes before and after them, but that was so clearly not the case with these bands. They are all close friends and help and support each other throughout their whole tour. That’s likely one of the reasons that I’m so enraptured with this Canadian music scene is because of the great deal of support and friendship that they have within their community. During the Grimes show all three acts were on stage having what seemed like a very good time. 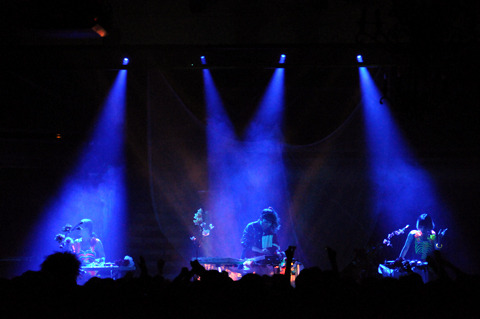 The final act of the show—the lady who sold out not only the 7th Street Entry this past March but also the Varsity Theater for this gig—was the wonderful Grimes. Grimes, a.k.a. Claire Boucher, really broke into the indie music world with her album Visions, which came out earlier this year. I was in attendance for her 7th Street Entry show but regrettably I had not yet gotten into her music yet. I was really only there for Born Gold. Six months later and at least six times more into her music, I was ready to really enjoy a Grimes show.

Of course Boucher has recently been named as the style icon of many, so I’m going to detail what she was wearing: button-down American flag shirt, baggy black shorts, black tights, and rhinestone sneakers with small platforms. There were three synths set up on stage, with Lief and Quinne manning the other two at first covered in gauzy sheets which were later shed to reveal these (super awesome) neon, glitter-covered, skeleton rompers. I’m such a sucker for the whole aesthetic that Grimes presents that I couldn’t help but to be excited by the costuming. The flowers and the gauze still adorned the stage, but the projector (not aforementioned) was facing the audience this time instead of the hanging sheet-for-a-backdrop. 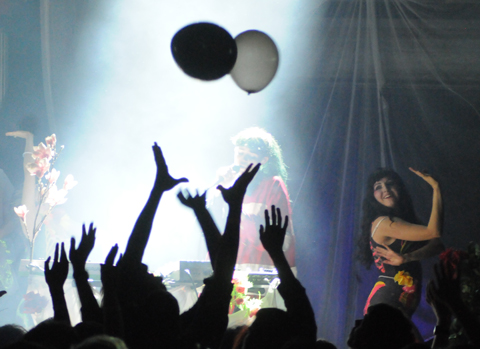 The set that Grimes played involved—refreshingly—a mix of not only Visions material but also some tracks from her older albums. The crowd was enraptured by her, which was actually a bit annoying to be honest. It’s okay to love an artist and to truly appreciate them, but I’m starting to see the wrong in idolizing a musician or group of musicians. They’re all just people. A bunch of concert-goers were screeching and shouting how Grimes is their queen, and she’s not. She’s a mega-talented and progressive producer. It’s almost demeaning to see someone be boiled down to an “idol.” I’m very guilty of having idolized bands and musicians in the past, but it’s refreshing to realize now that it’s just not healthy. By beginning to treat musicians as the people they are, I’ve been able to talk and actually make friends with many more of them than I ever would have been able to in the past. I mean, just imagine having people follow your every word and convulse with glee every time you did something remotely funny.

All this being said (sorry for the sidetrack), Boucher put on a fantastically entertaining show. The way she moves across the synths and pedals and knobs is almost like a jerky crawl, synchronizing with the bass here and the video games sample there. She also took the opportunity to dance around a bit between parts where she wasn’t immediately needed. In a recent Tumblr post, Deadmua5 discussed the role of producers, DJs, and electronic artists on stage, and James Brooks replied to it, saying that you can be honest about what you’re doing on stage as a musician, but you need to find a way to make it interesting for the crowd. Grimes knows how to do that. 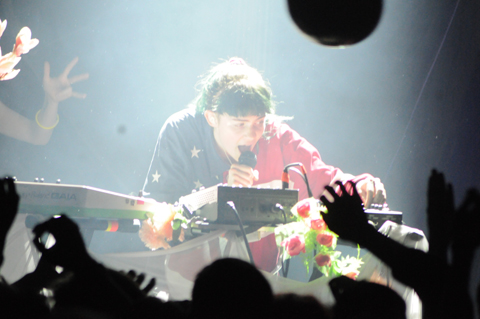 There was scant discussion between songs (if I recall correctly she talked only twice—one in greeting and the second time to explain why she wasn’t doing an encore and make reference to her friend, Blood Diamonds). It wasn’t really needed, though. The energy behind her set conveyed all the excitement and graciousness that was felt. I also am really awed by the image she portrays in her videos, music, and live shows. It embodies sweetness and strength, sexuality and positivity, all things that should be inspiring both the girls and women of the day. Hipster Runoff can make fun of her as much as they want for being some sort of indie queen, but she’s more than that.

The highest point of the show was signaled by the increasing pressure of the stage against my hips. People were getting pretty rowdy. Like, not rock-show rowdy but there were mini-fights busting out behind me because some drunken guy apparently peed his pants. Maybe he just has a puppy bladder and Grimes was just too much for him. The last few songs were especially fun. Boucher played the token “Genesis” in the final moments of the show which—of course—got the crowd especially excited. James re-joined Myths and Grimes back on stage to bop around some balloons, dance with Quinne, and swing the giant Totoro plushie over the crowd. 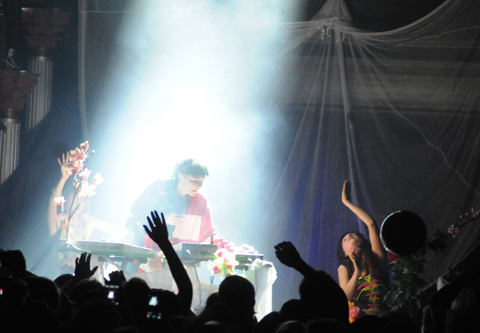 The show ended with the security guards pushing meanderers out of the venue and onto the sidewalk. I joined a group of people hoping to meet Boucher after the show because I wanted to talk to James again and introduce myself to Claire. Unfortunately the venue manager came out and told the nine-strong group of people that Boucher wasn’t coming out. Oh well, if you really wanted to meet her, you would’ve just stalked her at the Mall of America on Sunday.

(Side note: I really wanted a pussy ring but they’re $30. It shouldn’t cost that much to have a plastic vagina on your fingers, I mean come on.)