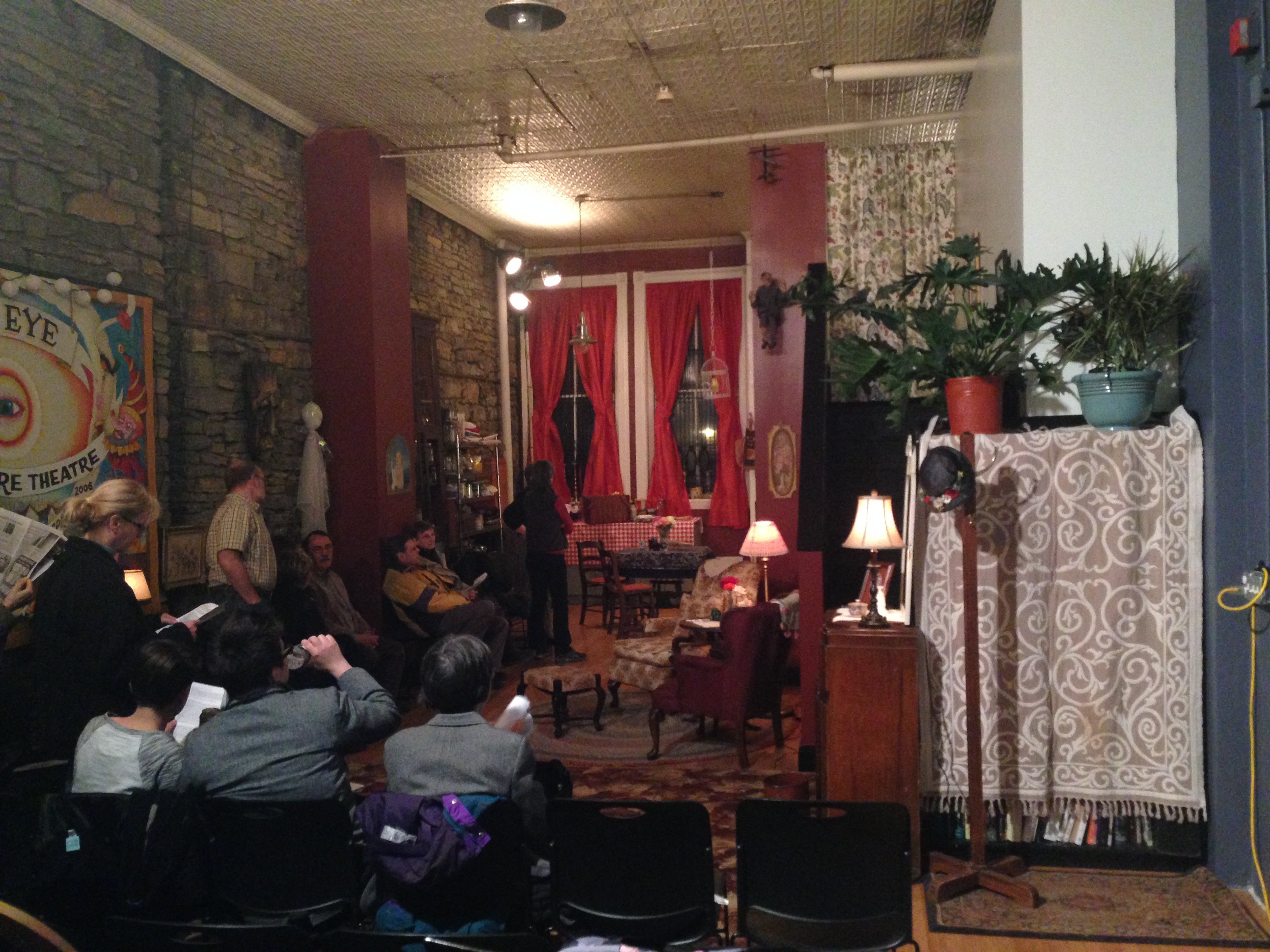 The Studio/Apartment Stage next door to Open Eye Figure Theater

After having lost their lease at their previous theater space, last week, Gremlin Theater’s A Lovely Sunday for Creve Coeur (directed by Jef Hall-Flavin) lost its venue at the 11th hour because of a St. Paul zoning snafu. The stage manager, Sarah Bauer, explained how the artistic director, Peter Christian Hansen, spent hours with city officials looking for a loophole that would allow the show to go on in the house owned by St. Clements Episcopal Church in Saint Paul. Unbeknownst to the company and the church, the Blue House at 897 Portland Avenue was apparently not zoned for public events. Creve Coeur, unbroken, re-grouped and became resourceful by tapping into the local arts community. Thursday, March 13 they opened the show at the studio space next to the Open Eye Figure Theater.

The story is tense and tightly wound as the characters face off about what they know and don’t know about each other and about who they are in society–which they can’t change.  Dorothea, a bit of a Southern Belle and a civics teacher at a nearby high school, moves into a cluttered small apartment with Bodey, a second-generation German old-maid, with a really nice brother who likes beer and cigars. (No pressure…but she is just desperate to set Buddy and Dorothea up). The two women share the small apartment until Dorothea finds something else. An unexpected visitor, the uncomfortably uptight and overly gentile teacher-colleague Helena Brookmire (Jane Froiland), enters the apartment like the spritzer in a cocktail. Snooty and directly disparaging, she puts the others on edge.  She needs to collect Dorothea’s share of the rent for a posh apartment they want to move into. Dorothea, however, won’t leave until she gets a phone call from the principal of the school (she sees him as her potential fiancee). The other women don’t trust him. What do they know that Dorothea doesn’t? You’ll have to come to find out. (Hint: Tennessee William’ places perfect clues in the first two minutes.)

Add the confused whimpering German-speaking neighbor Sophie Gluck (Noë Tallen) to the confines of this apartment and verbal punches start to fly. Gluck, which ironically means “happy” or “content” in German if you make it ü, was well-played by Noë Tallen. She shuffles around inconsolably, mumbling in German, which, even if the sentences were incomplete, was very convincing. Perfect timing and a clear Midwestern clarity to the characters, particularly Suzanne Warmanen’s Bodey, puts just the right twist on her lines giving the contrived plot a bittersweet level of tension. I imagine the East Coast failure of this play (at Spoleto and off Broadway in the late 70s, when Williams was still alive to rework this short play) might be attributed in part to location. Something about Jane Froiland’s Helena only just misses the mark, but I can’t pinpoint how. Too immature? Her costume was stunning. Maybe she just needs darker lipstick and penciled eyebrows. Sara Richardson draws her Dorothea simply sweet, endearing, albeit clearly deluded, with ablomb. I was a bit afraid that some of her scenes at the telephone by my elbow might have been affected by my nearness.

The studio efficiency apartment in Minneapolis functions well as the staging required a functional kitchen, a bathroom, bedroom off the main space, and a staircase to another apartment upstairs. After a few re-blocking run-throughs they were ready to go.  The kitchen is used to actually cook chicken for the outing to Creve Coeur (an actual park, with a resort and a lake outside of St. Louis, Missouri). The grease crackling with the chicken in the cast iron pan adds a huge element of tension during the first part of the show. I sat, without knowing the consequences, directly next to a cabinet with a telephone on it. The telephone practically plays a character in the storyline, as pining Dorothea (Sara Richardson) waits and lives for a call from her esteemed lover.  From where I sat, I could feel the actor’s breath and could see a sweat breaking out on the enervated forehead of Bodey (Suzanne Warmanen). At times I was almost inside the play, but only during a monologue in the second half does an actor intentionally break the fourth wall.

Nothing brings the efficacy of theater home more than an event in a real, non-theater space. Gremlin also produced the successful After Miss Julie in the J.J. Hill Kitchen in 2011–what Jay Gabler called “hanky-panky in the pantry.” Alternative venues are trending–see The Receptionist produced in an office space last fall by Dark and Stormy productions, Theatre Coup d’Etat’s Hamlet and Ghosts at American Swedish Institute in the ballroom (which has a diminutive stage).

In this venue when the lights go down, all the lamps and accessory lights also go down, and the theater space is defined nonetheless by poles for lighting at the entrance. This was also the case in the J.J. Hill kitchen: light poles, complex sound effects. The sound0–wired phone and radio cued by the computer make you feel like you are a voyeur in real space. I haven’t decided if this is a good way to frame the experience, or if in the end no lighting would uncomfortably intensify the experience and erase the distance to the piece. The lighting definitely reminds you that you are in a theater-like relationship to the action in front of you. In the end, the intimacy of the space ultimately serves the play well. In the apartment setting we can enjoy the voyeuristic moment to the bitter end. Another solid piece by Gremlin not to miss, now that it has a home through next week’s run

This production, as was the case with Gremlin’s 2009 Enemy: Time, will head to Provincetown, Massachusetts in September to be performed in the Tennessee Williams Festival.