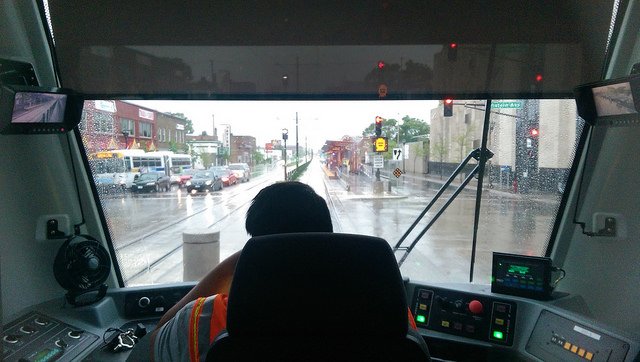 As the Green Line opened on June 14th, most of us were just excited to finally have a new service plying the busy Central Corridor area, but many were keeping an eye on their clocks and watches, checking its speed against the schedules that had been posted a couple of weeks earlier. On opening weekend, many trains were taking more than an hour to make it from end to end. The signal priority system that’s necessary for trains to operate smoothly just wasn’t working right. But hey, it was opening weekend, when 107,000 people turned out for free rides over two days—things were bound to be worse than normal.

Sunday turned to Monday, the first day of revenue operation, and things were…still slow. Fortunately, signal timing has been refined through the University of Minnesota campus and in downtown Saint Paul since then. Riding today is much less aggravating than during the first few days, but trains still aren’t hitting their scheduled times, so it’s clear that there’s room for improvement.

It has been difficult to find good information about how signal priority systems work in general and particularly how they’re set up on the Green Line. I sent a bunch of questions to John Siqveland of Metro Transit to try to clarify the situation. Personnel from Metro Transit and Saint Paul Public Works were kind enough to answer them.

Q: When did work begin on setting up signal priority?

A: Transit Signal Priority (TSP) was identified as the strategy to be used for traffic signal operation during the project scoping and design strategies in 2008 or 2009.

The Transit Signal Priority timing values were developed with the signal timing plans for the corridor in 2012 and were implemented during the train testing phase and continue to be reviewed and adjusted.

Q: How much progress has been made?

A: Since partial implementation began in February, we believe we have perhaps 10-15% more refining to do at this stage.

Q: How long is it expected to take to get signal priority functioning as well as possible?

A: This is a continuous process and transit signal priority adjustments are made as we determine them. We expect another step forward within the next few weeks.

Q: Is signal priority being implemented in downtown Minneapolis?

A: No. It operates the same as Blue Line. LRT is however accounted for in the 5th street signal timing plans.

Q: Is signal priority being implemented on the University of Minnesota campus?

Q: Is signal priority being implemented on University Avenue?

Q: Is signal priority being implemented in downtown Saint Paul?

Q: Are there any particular places that have been problematic?

A: We have been dealing with some issues with equipment and are working through a troubleshooting process to try and pinpoint the issue to determine if it is software or hardware. The City has recently installed a solution to this problem that appears to be working. We have been focusing on making adjustments to minimize stopping at lower volume intersections along University Avenue.

Q: Are there places on the line where signals are working particularly well?

A: Yes – The University of Minnesota campus area.

Q: Are traffic signals set up to create “green waves” for cars, especially on University Avenue? If so, how fast are they supposed to propagate along the roadway?

A: The traffic signal timing plans are developed to create “green bands” to facilitate movement of all vehicles in both directions on University Avenue. Adjustments are being made to provide good progression for cars at 30 mph and for trains at their posted speeds.

Q: In what ways are controllers able to change the phasing/timing of signals? Is green extension the only method available, as indicated on this Metro Transit page about route 10, or are the options broader, such as on this list on Wikipedia?

A: The controllers are using transit signal priority to provide green extensions and early greens and at locations where LRT has its own exclusive phase, there is phase insertion.

Q: Do the TSP emitters/detectors use radio or optical (infrared?) communication? Some other method?

A: There are loop detectors embedded in concrete between rails that are hard wired to the signal controllers.

Q: Are signal controllers able to detect trains via the tracks?

A: Yes. Via the loop detectors.

Q: How close does a train need to be to an intersection before a controller detects it?

A: Any detector is able to provide a detection call to any traffic signal in the system. This allows a call to be placed to a traffic signal well in advance of a particular intersection.

Q: Is the TSP system able to understand how far away a train is from the next intersection and how soon it will arrive, or does it simply aware of the presence/absence of an oncoming train?

A: Yes. The loop detectors send a signal to the controller when the LRV crossed the detector. Based on the spacing and estimated travel time, the timing plans are set.

Q: Can a signal controller know that a train is coming if it is more than one intersection away?

A: No. The signals are timed to provide a green band on the street to allow trains and cars to travel through on a green light. The train detection tells the signal the train is approaching which allows the controller to implement TSP by bringing up an early green or extending the green time if it is needed.

Q: Have signals been changing too early for trains because they get detected when they’re too far away (such as before pulling in to station stops)?

A: Every situation may be different, but if the train has to slow unexpectedly or someone holds the doors at a station, for example, it can have this effect.

Q: Can signal controllers at neighboring intersections communicate with each other?

Q: Are the interlocking signals able to communicate with traffic signal controllers?

A: No. Interlocking signals take priority (just like Blue Line).

Q: Is communication between train emitters and stationary detectors being affected by weather?

Q: Is communication between train emitters and stationary detectors being affected by obstructions such as catenary poles and wires or signal poles?

Q: What are the government entities that own and manage the hardware involved in signal priority? (City of Minneapolis? City of Saint Paul? Hennepin County? Ramsey County? MnDOT? others?)

A: The hardware is owned and/or operated by all of these entities plus Metro Transit.

Q: In late May, it was reported that the City of Saint Paul had just received some new hardware that was necessary for the correct TSP operation. Can you explain what that device was, and how it relates to TSP?

A: There was some equipment (C-11 connectors) that needed to be procured for implementation of part of TSP (Dual phase insertion)

Q: Who are the manufacturers of the signals, controllers, detectors, and emitters involved with TSP?

Q: Who are the contractors involved with installing and configuring TSP?

A: Traffic signal construction was done by Ames-McCrossan and Walsh. TSP programming has been installed by the cities with assistance from Central Corridor Project Office and their consultants.

Q: How many levels of priority/preemption are available with these signal controllers?

A: These controllers are able to be configured for many levels of priority and preemption. For instance, today the controllers handle emergency vehicle preemption, TSP for LRT, and regular vehicular traffic operations.

A: TSP is operated by the traffic signal controller.

Q: Could an emitter on the rear end of a train cause problems with TSP?

A: Trains do not use emitters.

Q: Have LRV operators been forgetting to either enable or switch the direction of the TSP emitters on the train?

A: There are no emitters. Train operators do not have to do anything to enable TSP.

Q: There are dozens to hundreds of cars passing through each intersection for each train that goes through. Are signal controllers being overwhelmed by the number of cars?

A: Not now and not before.

A: We do not believe so.

Q: Are there any laws or regulations preventing more aggressive signal priority, such as a requirement to maintain previously-existing levels of service (LOS)?

Q: Are there other comments you would like to make?

A: No. Thanks for the opportunity.

I was glad to get these responses, in part because it proved that some of my assumptions had been wrong. Did these questions help you better understand the behavior of car and train signals along the Green Line? What would you ask about?