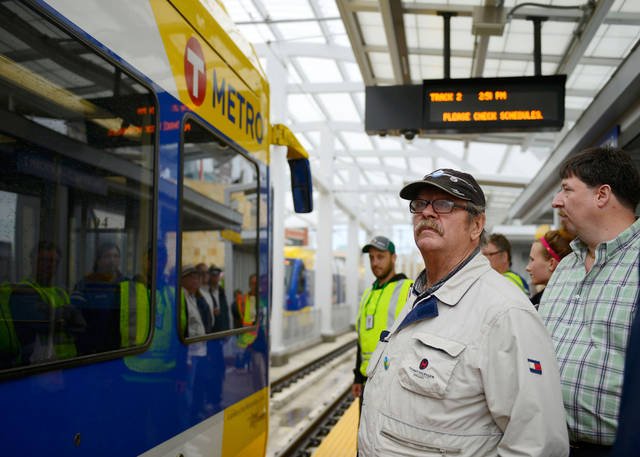 Passengers wait to board the Green Line at Target Field Station on Saturday. Despite the rain, the opening day of the Green Line drew large crowds to ride the new light rail between Minneapolis and St. Paul. (Photo by Chelsea Gortmaker)

Steady rain put a damper on festivities along the Metro Transit Green Line grand opening Saturday, but it didn’t stop crowds from turning out to ride the new light rail that connects 11 miles between the Twin Cities.

Politicians celebrated the $957 million project, which they said had been on Minnesotans’ minds for 30 years.

“We know our future is stronger when we are together as the Twin Cities,” Rep. Betty McCollum said.

Many also touted the new rail’s economic benefits — which according to Metropolitan Council has already contributed to at least $2.5 billion in construction and redevelopment along the Green Line’s corridor.

“This is about getting a transportation system that moves people to match the economy we’re walking into,” Sen. Amy Klobuchar said.

Community celebrations were held at seven stations along the line, including West Bank Station and Stadium Village Station, near the University of Minnesota campus.

The West Bank Station’s gathering included music and a traditional dance by the Oromia Youth Association.

Emi Nguyen, a recent University graduate, said she plans to take advantage of the downtown-to-downtown connection the Green Line provides.

“I just graduated and got a job in downtown. I live at the Station on Washington,” she said, “so I’m really excited, it’s really convenient.”

Ward 3 City Council Member Jacob Frey said students will benefit from the three campus stations that connect the University to both downtown Minneapolis and St. Paul.

“It provides an excellent connection for students at the University to jobs downtown,” he said. “It makes it a lot easier to call ourselves the Twin Cities when were connected by a rail.”