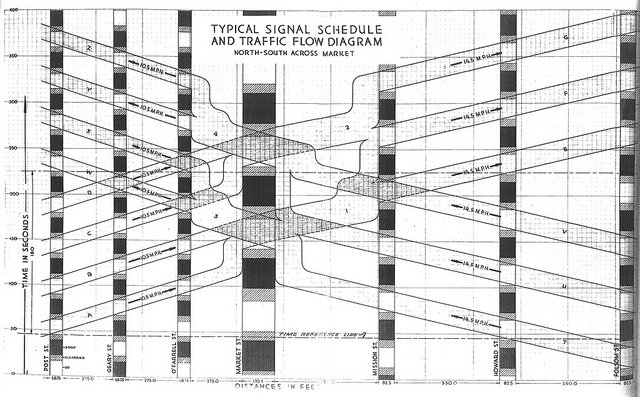 Suppose you have a train moving along (parallel to) an East-West (EW) signalized arterial.

Case 1: If the signals are pre-timed, and the timings are known in advance, the train should never have to stop for the signals (aside from emergency signal pre-emptions and other edge cases). Instead, the train should be able to adjust its speed so that it doesn’t have to stop. It might go at an average speed of say 10, 20, 30, or 40 MPH in order to ensure it hits a green light or better a green wave from whenever it departs a station. The train driver can be apprised of the optimal time to leave the previous (upstream) station, and the speed to travel to hit “green” lights.

Green waves have been around since the 1920s (See Henry Barnes’s autobiography: The Man with the Red and Green Eyes. Dutton. 1965. OCLC 522406). Static signs to tell travelers the speed of the green wave has been in standard use in some places (e.g. Connecticut Avenue in Washington, DC) for almost as long. Dynamic real-time signs which tell travelers what speed to adjust to to make the green wave has been recently patented and tested in simulation for automobiles: Always Green Traffic Control. The time is ripe for some carefully controlled field experimentation.

Still, pre-timing with information certainly doesn’t guarantee the fastest speed possible for the train, but it does guarantee no stops except at stations, which is good for a variety of reasons, including both travel time (avoid acceleration/deceleration loss), traveler comfort, energy use, and train wear and tear.

Case 2: If the signals are actuated, that is, their phase and perhaps cycle timings depend on traffic levels, and traffic “actuates” the signal, usually through an in-ground loop detector, transit signal priority from a fixed upstream distance should be sufficient to ensure the train doesn’t stop at a “red” light. The traffic light controller would know that a train was coming, and either keep the lights in the direction of the train green (if they are green), or change them to green and hold them, if it is currently red and the green is coming up. The train, knowing when the green will be on, should be able to adjust its speed (faster or slower) to make the green without stopping.

The distance that trains can currently notify a downstream signal controller is when they depart the upstream station, which is up to 1/2 mile or so (the spacing between stations). 1/2 mile at 30 mph takes 1 minute. With a cycle time of 2 minutes, and at least half the green time (1 minute) for the signalized arterial, a green can be guaranteed. If the light is currently red, it will be green within a minute. If it is currently green, it can be kept green for up to a minute. The worst case is it was just about to turn red and instead the green is extended for an additional minute. Alternatively, if it is currently green, a shorter than usual red phase can be inserted to clear the crossing traffic, before the light is turned back to green.

For traffic signals less than 1/2 mile downstream (say 1/4 mile) the warning time is only 30 seconds at 30 MPH. The same logic applies, but it is potentially more problematic as there is less lead time to adjust the timings, so the phase shortenings might be more severe. On the other hand, if more than 50% of the green time goes to the EW movement (say 75%) you aren’t really any worse off.

At 1/10 of a mile the warning time is less, but train departure from the station should be able to be coordinated with the light directly.

Case 3: But let’s say your traffic engineers are incapable of making this work. Should the train and its passengers suffer? This is where traffic signal pre-emption comes in. Most widely used for emergency vehicles, this potentially changes the sequence of phases, so maybe a phase is dropped (it doesn’t occur within the cycle, or within the usual place in the cycle).

This system does ensure that the vehicle requesting the pre-emption gets a green light as quickly as possible (safely turning the conflicting movements to a red phase) and thus can drive at as high a speed as possible. While trains should not need to stop at traffic lights with priority and speed adjustments, with pre-emption, they neither need to stop nor adjust their speed.

What could go wrong?

Pedestrians. Thus far we have been talking about a system with cars and trains. Pedestrians too can actuate signals, though “beg buttons“. These may function similar to vehicle actuators, in telling the traffic signal there is someone who wants to cross. The difficulty for priority or pre-emption is that a pedestrian phase may need to be longer since pedestrians take longer to cross the street than a vehicle does, especially if the street is very wide. So a pedestrian actuator may also extend the green time, in addition to calling for green time. This makes it more difficult to quickly change lights from red to green, since for safety reasons you can’t strand a pedestrian. This makes the ability to adjust train speeds in concert with the traffic signals more important.

Emergency vehicles. Emergency vehicle on emergency vehicle crashes are a known problem, and pre-emption may make it worse as firetrucks approaching a scene from two directions may both demand a green light, but only one gets it. The driver of one vehicle, not realizing he didn’t get the green (especially if he had the green as he was approaching), fails to yield. There are solutions to these problems.

Any of this will likely lead to additional delays for conflicting vehicle movements (cars making left turns or North-South traffic crossing our East-West arterial). With priority, this may even lead to extra delay for some vehicles on the parallel arterial who have been given a short green so the conflicting traffic can also get a short green before the EW arterial returns to green.

However the train usually has more people on it than are queued up at the other directions, so total *person* delay will generally be reduced.

For a variety of reasons, delay is bad (unless your goal is punishing drivers and air-breathers), we want to minimize total person time (or weighted total person time – recognizing long weights are more onerous than short weights) in the system (because time is money), and minimize pollution outcomes as well.

In short, the Green Line not getting green lights on University Avenue is a solvable problem. It should have been solved already. It eventually will be solved.