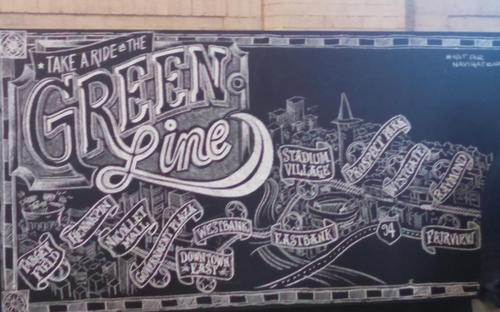 Our best intentions to walk and take the train from downtown St Paul to Minneapolis and back again were derailed when the rain hit. Once the rain came at us horizontally, staying local made more sense. That was OK since there were plenty of activities at Union Station to keep up hopping!

My nine year old companion and I started at Union Depot to see Koo Koo Kangaroo. It was a perfect start to the day: live music and an hour-long dance workout. Neil and Bryan were in great form. Lots of kids and not-exactly-kids rocking out with the band. Cat Party is quickly becoming one of our favorite songs; although tough to beat Awesome Rainbows.

There were two stages at the Union Depot. The Current stage in the back hall featured a range of local bands. The smaller bands featured a number of other entertainers — such as a flamenco dancer and contortionists. There were booths set up and we won wrist bands, made a paper train and one of us got to talk to Dessa.

I am not the sort to walk up to someone I don’t know to say hello, but I was so impressed with her interview of Russell Simmons a few weeks ago I had to say something. She was gracious and, while I know she was scheduled to play with Doomtree later in the day, she was out enjoying the sights and sounds of the depot when we saw her. Having lived in bigger cities, I have always seen the train as a great equalizer — you just never know who you’ll see on it.

Actually there were three stages. One was set up by a tap dancing busker just outside the station. I think she tap danced all day long despite the rain and cold and brief outfit. She was dressed for summer. I’m not sure how she didn’t break a leg dancing on that slippery platform, but she certainly caught a lot of attention. I hope we made it worth her time, as she was perseverance personified!

Back in the cozy indoors, we held on until 4onthefloor played. They rocked – new lineup and all. There were some serious fans in the audience and with any luck some new fans in the making. The Depot can warp and swallow a lot of sound, but the cavernous interior was no match for the powerful sound of 4onthefloor and Gabe Douglas’ strong voice.

Our day ended with a train ride home. I absolutely love the fact that we can take the train home now. To be fair, the walk from the Fairview station south to our house is not one you’d want to take in the dark but we’re a step closer to urban public transport.

I will add that there is opportunity downtown St Paul for more, quick but tasty restaurants. Maybe food trucks can fill the gap on the sunny days, but we need some cheap, cheerful and fast options.