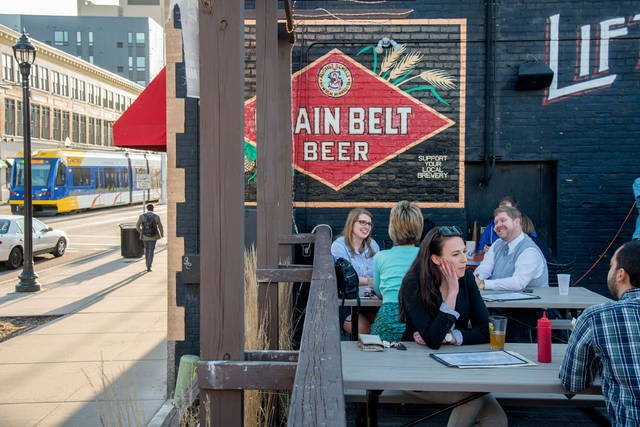 Patrons enjoy drinks on Stub and Herb’s outdoor patio as a Green Line light rail train passes on Washington Avenue on April 14, 2015. Businesses along the transit line that faced low sales and slow foot traffic during its construction are now bouncing back.

For some businesses along the Green Line light rail, the nearly two years of transit construction proved to be too much to keep operations steady.
The light rail’s construction from 2012 to 2014 pushed some Stadium Village and Prospect Park businesses — like 56-year-old Campus Pizza and Pasta — too far below their bottom line, and many of the area’s storefronts cut costs and changed some of their business practices.
But now, those businesses that survived the road work are bouncing back from the years of low sales and slow foot traffic that came with the construction.
In order to stay open, many area businesses reduced their staff sizes and inventory to keep revenue flowing.
Though Stub and Herbs has a loyal fan base and a 76-year-old legacy, owner Josh Zavadil said the business struggled through the two-year construction period.
Zavadil said he restructured the property’s mortgage and cut back on some spending during the construction to cope with the restaurant’s dwindling business as a result of the area’s lack of foot traffic.
The business relied heavily on customers from University of Minnesota hockey and football games, he said.
Other businesses along the light rail resorted to hosting events with the hopes of drawing positive attention to a depressed area.
While Art and Architecture Inc., an antique store in Prospect Park, didn’t struggle as much as other area businesses, manager Jodi Hohman said, morale in the area was low during the road work.
“Everybody was down in the area,” she said. “People were closing up shop.”
The antique store held a number of events, including “junk markets” — which are comparable to yard sales — to spur extra business, Hohman said.
The removal of parking spots came with the light rail’s construction, and businesses that relied heavily on those spaces are still feeling the loss.
During the construction, Paradigm Copies owner Gary Magee said his business on Washington Avenue Southeast removed some of its printing machines and shrank in size to reduce its rent cost.
He said the store lost a lot of walk-in business and didn’t attract any customers.
But now that the light rail is up and running, Magee said his storefront is more robust, and he expects its customer base to continue to grow.
“I’m seeing a lot of positive signs,” he said. “We’re on our way to doing much better.”
Few business owners in the area know their exact property values, but many said most of the land prices along the Green Line have gone up in recent years.
And owners who own their own buildings instead of rent, like Textile Center in Prospect Park, say they are glad that they do.
Nancy Gross,  director of the center’s administration, said since the train started running last summer, the nonprofit has seen more people visit its gallery space, and its consignment store has had higher sales.
On the Green Line light rail’s route, trains slowly turn onto University Avenue Southeast after the line’s Prospect Park stop — half of their windows facing the Textile Center.
“There are lots of eyes on us,” Gross said. “We love it.”

Article
Bill Lindeke
Do NOT follow this link or you will be banned from the site!
X