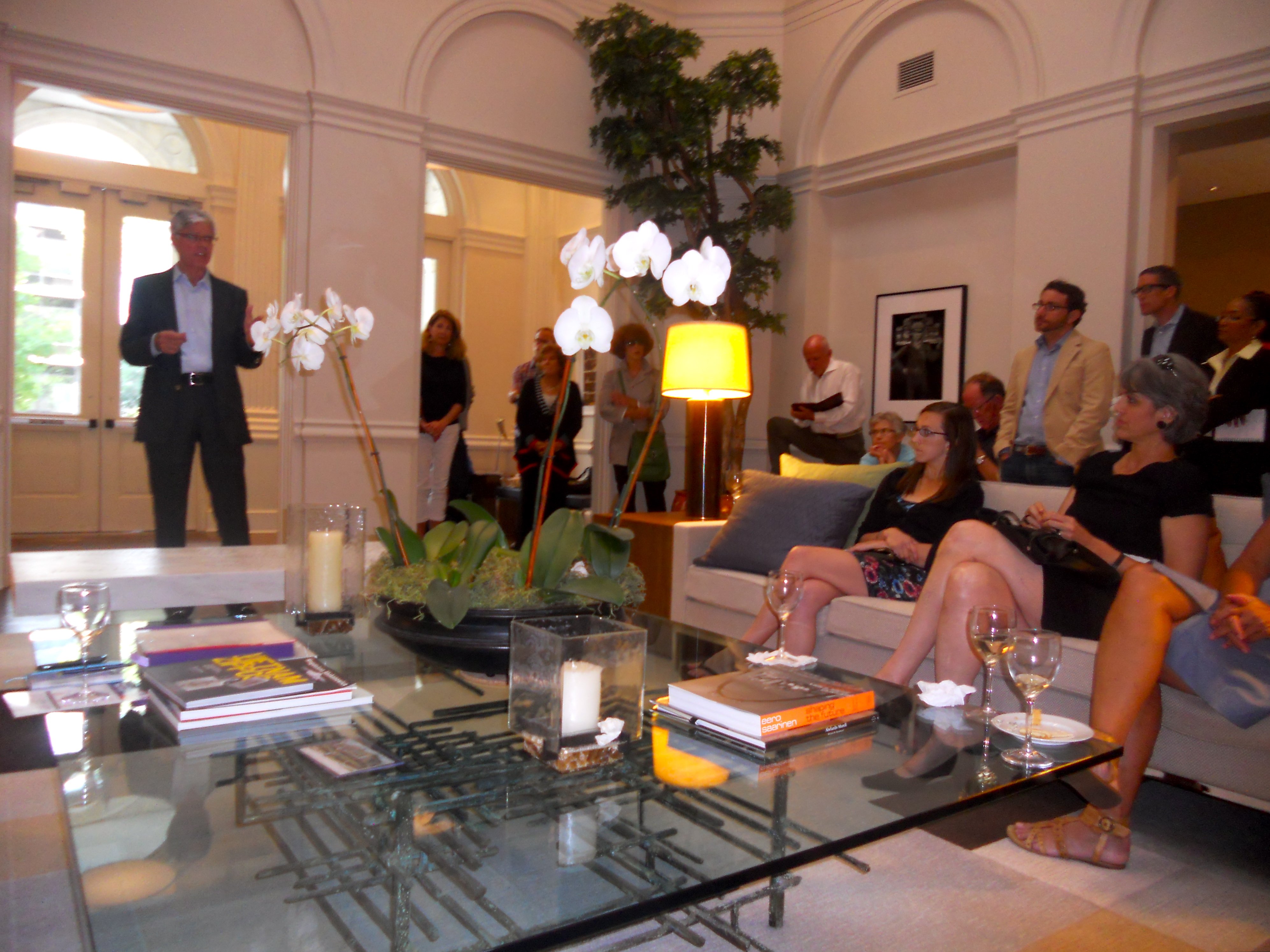 CORRECTED 7/29/2013: Mayoral candidate Mark Andrew spoke to around 60 friends, supporters, and curious citizens on July 24 at the Phillips Family Office in southeast Minneapolis, with Dean Phillips hosting the event. Andrew focused on the three issues he considers most important: making Minneapolis the “greenest city in America,” tackling what he referred to as the “gaps” in wages, housing, education, and overall opportunities among Minneapolis’ citizens, and finally, economic development.

The July 24 event, the second in a series of Kate Mortenson’s casual “meet the candidate” series,  began with a presentation on Ranked Choice Voting, then moved to a brief candidate speech by Andrew, and then to questions and answers. The first candidate to speak in the series was Don Samuels on July 17, followed by Mark Andrew on July 24. Next up are Jackie Cherryhomes and Betsy Hodges, followed by a last minute add-on of candidate Cam Winton, who is a Republican running as an Independent.

Andrew’s passions clearly seemed to be focused around transit and the environment. He referred frequently to his past experience as Hennepin County Commissioner, and highlighted his work on building the Midtown Greenway, the Kenilworth bike trail near Cedar Lake in Minneapolis, and the city’s recycling program.

Andrew was asked about the Southwest Light Rail controversy, which involves the expansion of light rail transit in southwest Minneapolis and western suburbs. A key aspect of the controversy is how to accommodate various neighborhood interests, and how to accommodate light rail and freight train traffic. Andrew drew applause from some in the crowd when he said he will not “abide freight traffic and light rail” utilizing the same rail system.

Andrew also received a fair number of questions about his views on education. Unlike Samuels, however, who declared that the “mayor can do whatever the mayor wants to,” when it comes to education matters, Andrew said that he is not a fan of mayoral control over school boards or superintendents, and that he prefers a system where the mayor has “no direct control” over the schools. Instead, Andrew discussed wanting to build a “collaborative force” dedicated to improving schools. He also spoke of wanting to focus on related issues such as early childhood education and safer neighborhoods so that all children in the city can attend their local school.

WIth negotiations currently going on between the Minneapolis teachers’ union and the Minneapolis school district, Andrew also said he “won’t compromise on collective bargaining.”

Andrew seemed at ease with the crowd, which included such DFL notables as Sam and Sylvia Kaplan and Don and Arvonne Fraser. The evening began with an overview of Ranked Choice Voting and the role it will play in this year’s election, given by FairVote MN Executive Director Jeanne Massey, and ended with additional discussion of RCV. Massey spoke about how this system is intended to empower more people by giving them real choices on Election Day.