If they can. Here’s the deal. The Boundary Waters Canoe Area Wilderness (BWCA) straddles part of the Minnesota/Ontario border. What with not being so much the trekking, camping type, I haven’t been there, but knowledgeable sources tell me that it is quite literally heaven on earth. Spectacular and powerful.

A corporate entity called Twin Metals Minnesota wants to dig and operate a big mine, for copper, nickel and whatever else turns up, right about where the South Kawishiwi River connects with the BWCA. (Here’s a PDF map; we’re talking about the one that says “Duluth Metals.“ More about the various corporate tentacles involved, below.) The project has the (almost giddy) support of many of the state’s top elected officials, which in Minnesota right now means Democrats, who have been seduced by the siren call of purported jobs and “economic development.” 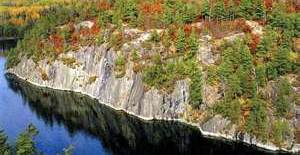 Here are the two main issues:

In the past, I’ve been skeptical, including on this blog, that this project will really happen. I believed that the investor/shareholder “benefit” in “cost/benefit” would be determined not to be there. I was wrong. This is very serious.

First, the environmental stuff. There are a lot of sources out there, about what happens when mining companies run amok. I picked this one as a solid summary.

One of the biggest factors in the dark history of sulfide mining is how frequently mining companies are wrong about what their impacts on water quality will be. One peer-reviewed study found that, while all projects that were reviewed predicted they would not pollute, at least 76 percent of the time they still did. The same study found that 89 percent of mines that have polluted said they would not.

It is this history that is one of the biggest reasons for worry about proposals to bring the mining to Minnesota. The industry says they won’t pollute our prized waters, but they’ve said that before, and they’ve been wrong more often than not.

The Brohm Mine, mentioned above, is also a useful illustration of this problem. There, the mining company assured the state that the mine would not produce acid mine drainage because the ore was low in sulfides, around one percent average. The mine still created terrible pollution, killing all the fish in that stream turned acidic.

This is an important point, because the mining industry in Minnesota frequently states that because the ore here is low sulfide, it won’t cause acid mine drainage. The companies claim that the ore averages about one percent sulfide. Sound familiar?

…In Wisconsin, the legislature in 1997 passed a “Prove It First” law. This law says that, before opening a mine, a company must be able to point to a similar mine to what it is proposing that a) has operated for 10 years without polluting and b) has been closed for 10 years without polluting. Unable to point to such an example, no new mines have been proposed in Wisconsin since the law passed.

(Friends of the Boundary Waters Wilderness)

(As an aside, and a very distressing one, things recently changed in Wisconsin.)

Regarding “jobs,” the blockquote summarizes part of a definitive, 5-part series. (The links to the others can be found in the one below.)

With that, let’s try to answer another important question: does opening a new mine improve business income and increase local population? In the Safford Micropolitan Statistical Area, comprised of Graham and Greenlee Counties in southeastern Arizona, the answer is no. The opening of the Safford mine in Arizona in 2006 demonstrates that adding a new mine to an existing mining district did not create significant population growth, nor did business income improve…

This is an important lesson for those who would pin their economic development hopes on new mines in northeastern Minnesota. The lack of diversification in the Safford area bodes poorly for sustainable economic and population growth. The sugar high of a new mine development quickly faded into a headache of lower business income, higher unemployment, and continued population stagnation.

This is the likely outcome from opening a new copper-nickel sulfide mine or two in northeastern Minnesota, even assuming there is no significant economic downside from lost tourism jobs. And somehow, nobody ever thinks about those jobs.

My information is that Twin Metals has promised to use union labor to build the infrastructure. There’s been no such promise, regarding the actual mining operation.

Twin Metals Minnesota is not really some little local outfit trying to responsibly make an honest dollar. Rather, it is yet another front for the megalith that is the global mining industry.

In (early April 2013), the PolyMet and Twin Metals projects have sold significant stakes of their proposed sulfide mines to foreign commodities investors. This demonstrates that if these mines open, the metals produced will be sold overseas and the profits will flow to wealthy foreign investors and multinational corporations.

…Duluth Metals (majority owner of the Twin Metals project) announced that it received a $30 million (CDN) investment from CEF Holdings to finance the Twin Metals proposal. Hong Kong-based CEF Holdings is a joint venture of Cheung Kong Holdings and the Canadian Investment Bank of Commerce (CIBC.) Both of these entities are connected to Li Ka-Shing, the richest man in Hong Kong and one of the 10 wealthiest people in the world. Mr. Li’s Hong Kong conglomerate contains several companies, the largest of which are Cheung Kong Holdings and Hutchison Whampoa…

(Friends of the Boundary Waters Wilderness)

And guess who Glencore recently made interim chair? Tony Hayward…yes, that Tony Hayward, CEO of BP during one of the greatest environmental catastrophes of our era. I don’t normally believe in omens, but…

Thankfully, the public is turning against this. From March:

In a statewide telephone survey by Fairbank, Maslin, Maullin, Metz and Associates and Public Opinion Strategies, 48% of Minnesotans opposed the proposed sulfide mines while 39% favored the mines.

According to the Partnership, this is a 29% increase in Minnesotan’s opposition to sulfide mining compared to a similar poll in 2009 when only 19% opposed the new mines. During that poll, 66% of those questioned supported the mines.

But that doesn’t seem to be affecting the sulfide mining fans, some of whom, as I noted before, are in the proverbial “driver’s seat.”

To provide a reasoned, objective summary, corporations want to put a big mining operation, that will generate mega-quantities of toxic waste, right next to one of the most sublime wilderness areas in North America, in order to further stuff their already bloated pockets. What the f**k?!?! It is simply not realistic that a project like this can be profitable without producing substantial, long-term environmental damage, especially at the squeeze-every-penny-out-of-everyone-and-everything levels of “profitability” demanded by contemporary high-end investors. And the crap about a guaranteed economic boom is a preposterous canard.